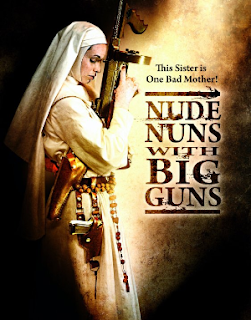 Tagline: "This Sister Is One Bad Mother"

I've always bought a significant quantity of videos and DVDs across a wide variety of genres but after recently joining the splendid Netflix service, my options have become broader than ever before. I've been reminded of dozens of films I've meant to watch but then forgotten about, but I've also been introduced to some I've never heard of before, much like the bluntly-titled Nude Nuns With Big Guns. If I encountered a film like this one in a shop, for example, it’s not something I’d buy. I’d probably pick it up, look it at, perhaps snigger over its name (and humorous tagline) with any friends I might be with, but buy it? That’s assuming it’s even available on DVD of course, but regardless of that, it is a film that catches the eye when scrolling through a list on the TV screen. How could it not? Weighing in at a trim 88 minutes, I figured it was worth a shot, for comedic purposes if nothing else!

It's set in one of the southern states in the US - Texas or New Mexico or something, probably - and portrays the church in that region as almost wholly corrupt and immoral. The nun of the title, Sister Sarah (Ortega), is one of many who are routinely abused, drugged, and generally treated with nothing remotely resembling respect. On the verge of death and about to be executed for good measure, Sister Sarah receives a message from God. If she can get out of her current predicament, she is charged with exacting brutal revenge on all those who have wronged her - including her fellow members of the clergy. As soon as they realise what's going on though, they enlist the help of a local motorcycle gang, the Los Muertos, headed by Chavo (Castro), to take her out.

As if I couldn't have already guessed, it was immediately apparent that this is a film made on a low budget but that doesn't automatically make it crap - some of my favourite films were made for a mere few hundred thousand - but it doesn't do the film-makers any favours either as they're unable to gloss over any flaws, and there are a few here! As you may have already gathered, the 'story' is merely there to facilitate the shooting, and nudity apparently, and there's plenty of both, but much of the acting, script, and even sound editing, are rather poor as well. A couple of scenes are even reminiscent of 70's-style low-budget softcore porn! That doesn't stop NNWBG from being occasionally entertaining and amusing in equal measure though - it's hard not to make scantily clad girlies shooting the crap out of people's faces appealing on some level - but I also must've glanced at the clock almost every one of those 88 minutes and that's not good news. It's a film with an accurate title but it doesn't offer much else.