Well, the festive season is well and truly over now and I'm back at work (not right now of course, that would be inappropriate use of company time!). Accordingly, I was correct, my demeanour has indeed gone downhill this week. Funny that, isn't it?! Oh well, least I've managed to distract myself for a while with another selection of fine film favourites. Behold: 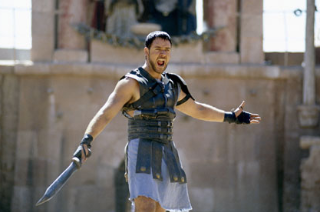 Despite being a rather hyped, big-name release, I knew little about this film when it was first released. Then, my good friend Luke suggested we go to watch it at the cinema. I was reluctant as I'd already decided I didn't like it. But then I saw it and... crikey, feed me to the lions if it wasn't one of the finest films I'd ever seen! Russell Crowe is of course exceptional as betrayed Roman general, Maximus, but the quality of the rest of the acting is also remarkable. Arguably even more impressive is the sense of spectacle and atmosphere created by Ridley Scott's faultless direction and the rousing soundtrack by Hans Zimmer. Gladiator did more than just win awards and entertain countless millions though - it reinvigorated a long-stagnant genre which made most of the many subsequent offerings possible including the likes of Troy, King Arthur, 300, Kingdom of Heaven, and even Game of Thrones. "ARE YOU NOT ENTERTAINED?" I certainly am, enormously, every time I watch it... (Top Five Moments here) 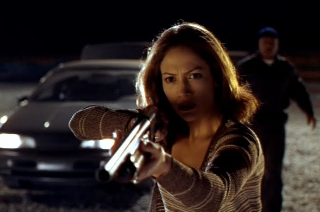 Unlike the previous film in this list, Out of Sight is actually a film I was enthusiastic to see, but when I did watch it I didn't really think much of it. It was so highly-regarded though, that I felt obliged to give it a second chance, and when I did I finally started seeing what all the fuss was about. As a film based on an Elmore Leonard novel it already carried a certain amount of expectation and it also had some pretty big-name cast and crew members attached too, including Mr. Clooney in one of his first starring movie roles. Once you forget what you're supposed to think of it though, and actually watch it for what it is, you get it, or I did at least. The plot isn't complicated - it's little more than a heist movie really - the appeal stems from the characters, and their chemistry with each especially, particularly Clooney and Jennifer Lopez (is this her only good film?). The direction is also superb with Steven Soderbergh having never been better in my opinion and a great soundtrack rounds things off nicely. 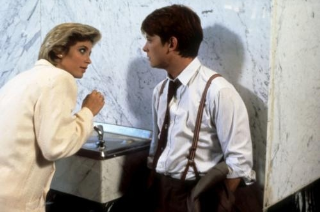 Poor old Michael J. Fox, what a frustratingly short on-screen career he had. Of his handful of film appearances, most would probably plump for one of his time-travelling antics as their favourite, but mine is this rather unrealistic but tremendously entertaining comedy starring Mr. Fox as a freshly graduated "college puke" from Kansas whose job in the big bad scary city (New York of course) has fallen through. Now reduced to begging for a mail-room job at the huge corporation run by his uncle, it's not long before he's created an alter-ego... who just happens to be a top executive at the same company! Yes, it's all silly stuff but Michael J. Fox's unmistakable charm makes it hard not to cheer him on all the same and a suitably slimy bad guy makes the almost-obvious outcome all the more satisfying. In a bad mood or feeling down? Watch this = problem solved! (full review here) 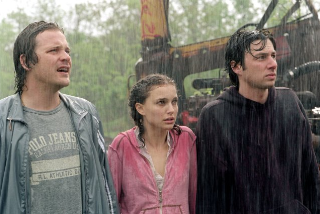 I believe it was a review in a magazine that initially drew me to this film. The presence of the delightful Natalie Portman made it an enticing prospect in itself, obviously, but I had also become a Zach Braff fan owing to the mighty humorous Scrubs, so I figured it was worth a shot, especially since he wrote and directed it as well. What I got was a rather unusual film but also a greatly enjoyable one. Whilst essentially a 'homecoming' story for Mr. Braff's character, Andrew Largeman, who's been away from his friends and estranged father for a long while, the focus is more on his encounter and subsequent relationship with Sam, a quirky compulsive liar played by Portman. For a début (and so far, only) writing/directing effort, Garden State is quite remarkable - there's really no aspect of it that isn't splendid in my view, from the script and soundtrack to the oddball antics 'Large' and his friends get up to, it's all thoroughly enchanting. Be warned though, it'll make you love Natalie! 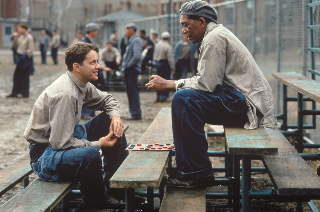 Out of all the films I've chosen so far, this one is probably the most universally revered. Few film fans don't count it among their favourites and that's certainly been the case for me since the moment I started watching it. A good friend of mine is the only film fan I know who doesn't like it, labelling it 'a bit of a downer', but that's completely missing the point, surely? The clue is in the title - redemption. Sure, life seems to treat Andy Dufresne rather harshly - not only is his wife having an affair, but then she gets killed and he gets imprisoned for it! Much of what follows is even harsher but luckily Andy, and us viewers, are blessed with one of the most wonderful and satisfying endings in film history. It only occurred to me a few years ago, after umpteen viewings in the many years prior, that Andy's innocence was never shown or even hinted at until over halfway through the film, I had just been assuming it without realising all along. That, if nothing else, is testament to the power of this timeless story of friendship and hope. (Top Five Moments here)


That's it for today but if you're intrigued as to the other films included in the list, come back soon for another five!
Posted by RetroKingSimon at 21:15