Wowzers, super-busy 'holiday' period, then super-busy work, and topped off by an inconvenient period of illness, I'm amazed I got this series of posts finished at all! But here is the last selection of my favourite films. As you've probably noticed by now if you've been following the series, my taste in films is, as my good friend Luke would say, unique. No doubt many film fans would decry the absence of numerous cinematic masterpieces but the simple answer there is - I either haven't seen them yet (particularly some of the older ones) or I just didn't like them, at least not as much as the films I have included.

For example, some films that always populate 'Best Films of All-Time' lists such as Taxi Driver, The Godfather, Citizen Kane, Blade Runner, Spartacus, Raging Bull, Alien, etc... They're all great films, of course, but in the case of most of them, seeing them once was enough. In my opinion, a really great film is one that you want to watch again straight after seeing it as well as thrilling you the first time you see it. That's why I like the films I've included so much. If I'm ever bored, feeling down, or just want to relax, have a drink, and be entertained for a couple of hours, any of them will do the job admirably and have done countless times before, whether watching alone or with friends. So, for (possibly) the final time, here is my selection: 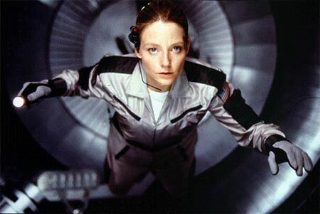 I don't normally take chances on a fledgling technology but I bought a DVD player before anyone else I knew. There were only about ten films available on the format at that time and one of the two I bought with my player was Contact, a decision based purely on the fact that it had seemed slightly science-fictiony. Luckily for me it also turned out to be rather good! The rarely-disappointing Jodie Foster stars as Ellie, fascinated by the stars since an early age as urged by her father, and working for SETI as an adult. She spends most of her time searching for extraterrestrial signals and eventually finds one, although its meaning is of course initially unclear. It might sound a bit boring, especially if you've no interest in science, but it's still a top-quality and nicely-paced film. Ms. Foster is great as usual, conveying her passion for her job (life) superbly, and she's got some great support too. I suspect my appreciation for it is partly down to my own interest in astronomy but so what!

Butch Cassidy and the Sundance Kid (1969) 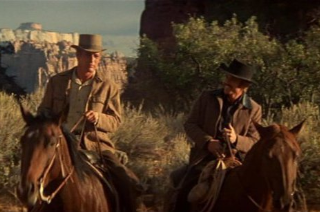 For some reason I don't seem to have embraced 'old' films as enthusiastically as I have 'old' music but there are a few I like including many of those starring Paul Newman. My favourite of those by a small margin is this, the first (and possibly only) Western I really like. Why is this? Well, I can't really say why the genre doesn't usually appeal to me, nor why this particular example does, but it sure is a fab film! It stars Newman and a then-largely-unknown Robert Redford as the two legendary outlaws respectively, who spend a majority of the film on the run from a 'super posse', and I think it's probably the chemistry between these two that makes it so appealing, as well as the likeability they possess as well. After all, Butch and Sundance, if accurately portrayed here, were a pair of thieving, murdering bastards who seemingly cared little for the lives of anyone else. It's therefore mighty impressive that I find myself cheering for them every time anyway! 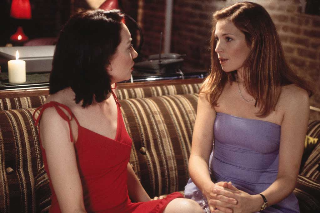 I don't think it's particularly sexist to say romantic comedies are generally the province of the fairer sex. Even I, with my somewhat unusual taste in films, find sitting through most of them even once to be a struggle, never mind repeatedly. This one, however, is different. It was written by its two stars - real life 'besties', Jennifer Westfeldt and Heather Juergensen, neither of whom are especially well known, although you wouldn't know it from the quality of this low-budget indie. The former plays the uptight copy editor of the title while the latter plays Helen, a sexually-liberated art gallerist, both of whom stumble into a relationship... with each other! I haven't seen either actress in anything else (with the exception of a small role in 24 for Westfeldt) but both suit their respective - and very different - characters well, making for a rather unusual but also rather interesting couple who I can't seem to stop watching! 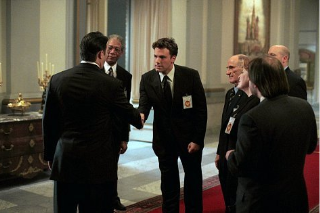 Tom Clancy's series of Jack Ryan books, and the resultant films, are held in high esteem, but the one that's probably the least highly regarded is this one so it confuses me that it's my favourite. It was intended as a 'reboot' of the film series and as such, the Jack Ryan featured here is much younger and far less important than he was in previous films. He's also played by a much younger actor - Ben Affleck no less, who wasn't a particularly popular choice. He does a decent enough job for me though, as he battles to save the U.S. (and by extension, the world, obviously) from nuclear war. He's got some superb support from Morgan Freeman, James Cromwell, Liev Schreiber, Alan Bates, and Ciaran Hinds, and romance comes in the delightful form of Bridget Moynahan. There are some significant differences here from Clancy's book but Jack Ryan's most recent film-based adventure is still a cracking (and surprisingly rewatchable) thriller in my opinion. How could the prospect of a nuclear war between the U.S. and Russia not be thrilling? Except in real life, obviously. (full review here) 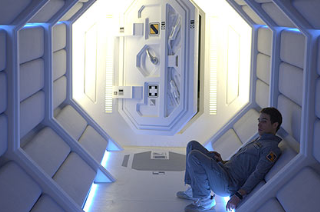 The last film selected for these lists is also one of the most recent included. I'd heard about it for a while before I got around to buying it myself but I still didn't really know much about it - just that it's set on the barren satellite of its title and features an extremely limited cast, and this was indeed the case. The story takes place in our not-too-distant future at which time we have a mining facility located on the moon which is largely automated, needing the guidance of solitary workers who each take a three year stint on the base. The worker in this case is Sam Bell, played by Sam Rockwell, who's nearing the end of his time there when he has a serious accident. Thanks partly to the superb performance of Rockwell and also the haunting atmosphere aided by sterling sets, effects, and soundtrack, Moon is a thoroughly entrancing film for every minute of its unique and lonely run-time. (full review here)