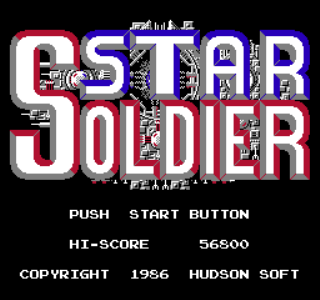 There I was, all set to finally begin my long-awaited review of Super Star Soldier for the PC Engine only to discover at the last second that it actually has a prequel out there somewhere. Completist that I am, it was therefore obviously necessary to take a look at that game first! It was released initially just for the NES and MSX but as far as I can tell neither version has a back-story, so I'll assume it's just another 'evil aliens invade, must be kicked out' type affair. The aliens in question (if indeed they are aliens) are mostly small and swoop through the vertically-scrolling stages in formations of various types and speeds and it's your job to take out as many as possible with your not-especially-imposing fighter craft. There are a mighty impressive sixteen stages altogether, all of which are located in space and scroll over seemingly endless structures of some sort. Perhaps they are enemy bases, who knows? All I do know is, they are festooned with various shootable bits which are represented by different icons such as stars and skulls, each of which offers bonus points galore! 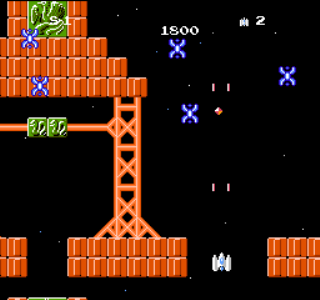 Shooting these things should serve only as a secondary objective however - your chief concern should be the waves of enemies. To that end, your ship starts the game with a weedy forward twin shot which can fortunately be upgraded by shooting the 'P' icons which are among the various scenery-mounted icons. Collecting one gives you auto-fire and speeds up the movement of your ship, a second increases the power of your cannon and adds a rear-shot, and a third adds two side-shots and a shield. Any icons collected subsequently act as smart bombs. If you take a hit from an enemy bullet (but not an enemy itself) while fully equipped, you'll merely lose the power-up thanks to the shield which lasts for several hits. In addition to the standard enemies which take few hits to destroy, there are also several bosses. There are two types of mid-boss which don't appear on every stage, but the stages do all end with a confrontation with a 'Star Brain' which can be found housed in one of two different sizes of vessel. The larger one appears less often but either of them should be taken out as quickly as possible - if you take too long, they escape and you'll be sent all the way back to the start of the stage! 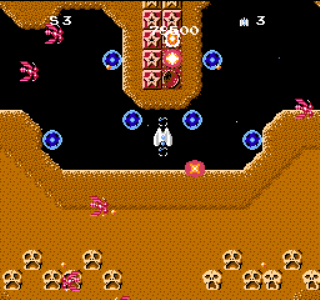 This can make Star Soldier a rather tricky game so the most important thing to learn is the best and quickest way to see off a Star Brain. The stages themselves merely consist of multiple waves of small enemy craft swooping around making the gameplay a bit reminiscent of a scrolling Galaga in some ways. Despite the prevalence of the structures/scenery and destroyable stuff on them, you can't actually crash into any of it. Only the enemy ships pose a problem and, although some of them shoot back at you, the threat mainly comes from their often-erratic movements. That said, your ship actually flies under some sections of the scenery during which time you can't fire - eek! This can also be a bit confusing as you may not be totally sure where your ship even is until it emerges, hopefully not right on top of an enemy ship or bullet! Deaths are not as crippling here as in some shmups though. You do lose all your power-ups but you don't return to the start of the stage and your ship can quickly be returned to its former glory. 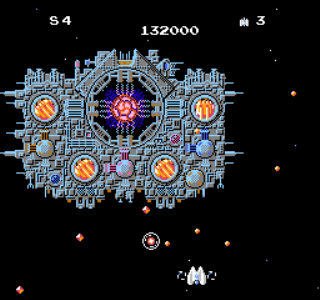 Whether you'll be inclined to do so or not is another question though. Judging the game by its aesthetics, it's very much an early NES game. The sound effects are basic and the music simple - catchy but repetitive with few different tunes (though powering-up your ship has one of its own which is probably the best), and it's the same story with the graphics. A sparkly starfield forms the backdrop to every stage and the structures that lay between them feature little variation in colour. It seems like the whole game will be black and orange (the same colour as the enemy bullets, helpfully) to start with! The colours vary a little more further into the game but everything seems a bit messy and disorganised to me as well. The number of enemy sprites is pretty decent, although I'm not really sure what any of them actually are and explosions are very poor, sadly. The repetitive nature of the audio/visuals also extends to the gameplay as you may have guessed, making Star Soldier okay in short bursts but a bit of a chore otherwise. Control of the ship and the collision-detection are okay and it can be decent fun to play but, despite the number of stages, it's not an especially long game and can be completed in around thirty minutes or so, but even at that length I just didn't find it very interesting either, unfortunately.