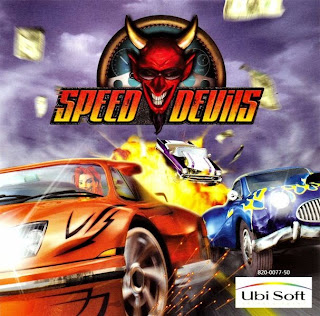 The Dreamcast is famous for many things including some fantastic driving games, but Speed Devils is not really one of these. It was first released as a PC game known as Speed Busters a year earlier but this DC version was intended to be a launch title here in the U.K. As would turn out to be that case for an alarming amount of DC games, it was delayed, but it did surface a month or two later to some rather encouraging reviews.

That was enough for me in my old irresponsible credit card days so I snapped it up and it soon became a favourite. When I recently dug out all my DC stuff after a frankly baffling and unexplainable period of dormancy, I was therefore not very surprised to find myself seeking it out before any other game. I've played a lot of racing games since I last powered this one up though, and mostly on more powerful systems too, so I was also interested to find if it still held as much appeal as once it did.

To say that Speed Devils is an arcade style racer is putting it mildly. The cars are all fictional - the earlier ones are mostly older muscle cars while the later ones are all flashy sports cars and you can't wreck any of them (well, you can smash them up but they never stop working). This of course means that you can run down your opponents as vigorously and frequently as you wish! Around half of the cars need to be unlocked, however, by buying them in the Championship Mode before they can be used in the Arcade, Time Attack or Two-Player modes. The Championship Mode is where all the one-player thrills and spills are to be had anyway though.

After being given a chance by a crooked bookie to compete in his leagues, you begin with a crappy knackered old motor and a mere $10,000. You enter the championship in the bottom of four leagues and to make your way up you obviously need to win races and earn money! You can initially do this with your crappy knackered old motor but before long you'll need to either buy a nice shiny new model or fix/tune-up your existing car(s). Your base of operations is a garage where you can store up to three cars and repair/modify them, save/load games, go to the car showroom (to buy or sell), view league standing and upcoming races and even view your trophies. 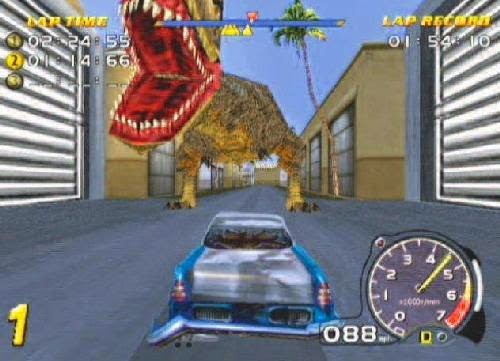 Finishing a league in first place doesn't guarantee a promotion to the next league though - this is dependent on your points tally and you get one point per dollar you earn. Each league has a minimum quota of points to achieve before the option of promotion is given, but you can stay in your existing league for as long as you like by turning down these offers in order to obtain more money. Jumping up a league sees a significant improvement in both the driving skills of your opponents (there are five contestants in each league, and indeed each race, including yourself) and the dirty tricks they often employ to secure victory, so remaining in the lower leagues until you can afford the top cars is often a prudent move.

Another way to make more money is from your opponents. From time to time they will give you the chance to place a bet, and for fairly hefty sums too. If you accept, you'll have to fulfil certain conditions in the next race such as beating that racer or preventing another from finishing in a certain position, for example, and your boss (the bookie) will sometimes make you similar offers for larger sums of money or add-ons for your cars such as nitro boost. In each league, you will also very likely be presented with a special challenge by a particular driver when things become too personal between you. This is called a vendetta and takes place over one lap of one of the courses in that league, with the winner getting the loser's car! 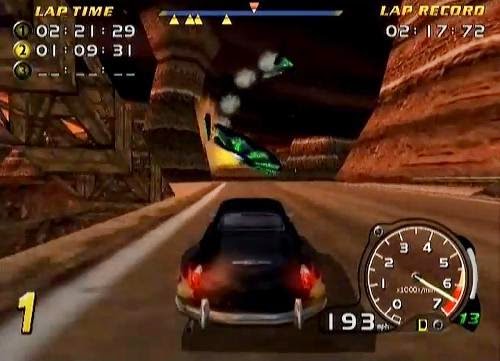 Perhaps one of Speed Devils' strongest points is its courses. Although there are only seven of them plus a few variations, they are long and feature packed and can be driven in the now-standard forward, reverse and mirrored. They are also all themed and include Hollywood, Aspen, Canada, Nevada, Mexico, Louisiana and New York, and, with the exception of the last, are in circuit form. For the most part they are very well designed but what earned the game the little fame it did receive are the features contained in each which are not particularly realistic but are entertaining.

The Hollywood course, for example, features a T-Rex, King Kong, and Jaws causing havoc, the Aspen course features rock falls and aircraft leaving multi-coloured smoke trails across the screen, the Nevada course features UFOs attempting to abduct you and later crashing. It's all pretty crazy stuff and not really something that had been seen in a racing game before (not that I know of, anyway), but that's not all - some courses have several incarnations which each have extra or different features. For example, Aspen has both summer and winter versions with the different weather conditions effecting more than just the scenery and, likewise, 'Hollywood Disaster' and 'Louisiana Tornado' introduce unique hazards as well. 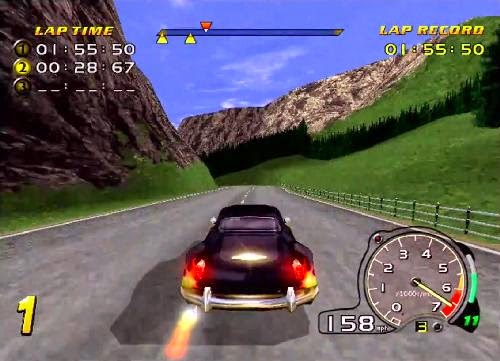 Some of the course features are exclusive to certain laps and times, and there are also many short cuts cleverly hidden away, some of which can also only be used at certain times. Money is earned in races, other than accepting bets, in several ways. First is obviously your finishing position, but other ways include spending the most time spent in the lead, achieving the highest speed, the fastest lap, and that kind of thing. The last way is to 'bust radars'. The radars are placed at three stationery points on each lap and each displays a default speed. Beating this speed gives you money - the more you beat it by, the more money you'll get.

I imagine at this point you're thinking, "whether it's good or bad, Speed Devils sounds like a pretty original and creative driving game", and it most definitely is - even now I've not really played any other quite like it. Back at the turn of the century I'd even go as far as saying it was my favourite such game ever. Even without stuff crashing and blowing up around you, the courses are still very distinctive and memorable. One minute you could be driving across a dusty trail or along a precarious cliff-top and the next you might be crossing a log bridge or skating across a frozen lake, and the ultra-grippy handling makes it enormously enjoyable just to drive as well. 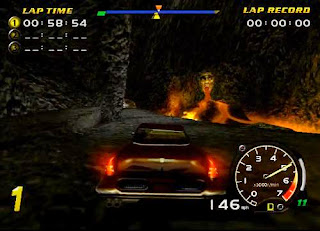 I've played games like Burnout and Forza Motorsport since then though, which has had me wondering whether I'd enjoy Speed Devils as much after all this time. It doesn't have dozens of courses or ten million real life cars after all. To be honest though, it has aged somewhat. It was never the Dreamcast's best looking game and in spite of the impressive T-Rex and giant tornado and all that stuff, I can't help thinking now that everything looks a little N64-ish (blurry textures, dull colours, etc - perhaps it's the result of a lazy port from the older PC version).

There are some nice lighting effects though. Races seemingly take place at random times of the day, you see, which sees colours changing accordingly, and if a race takes place at night the headlights of the various cars shine all over the place, which looks pretty cool. It's not so much fun if you break them though! The audio is quite poor too, although that has always been one of Speed Devils' weak points. There are very few effects (the engine sound is just a low hum) and the music is also rather quiet and not especially inspiring either.

For most though, this game has always been about those great courses and all their surprises. Yes, it's just a gimmick at the end of the day, but there is a decent game behind them too. The championship mode is quite easy and does ask you to repeat courses over and over, but exploring them as well as engaging in bets/vendettas keeps things interesting and it'll still keep you busy for a fair old while anyway. It's not perfect and it might not quite dazzle me as it once did but Speed Devils is still a hugely enjoyable driving game which is still well worth checking out.

Special Note: Apologies for the standard of the screenshots here - unfortunately, Speed Devils is one of very few games that apparently doesn't work via emulation so I couldn't grab my own screenshots. And of course, those available on the interweb are either small and/or poor quality or... tagged (grrr!) which is unacceptable. Hopefully one day I'll have the time/knowledge necessary to faff around connecting my DC to my computer and grabbing shots the annoyingly-troublesome way, but for now... :(