Star Trek fans are a notoriously picky bunch and the reaction to Voyagers debut season was not universally glowing. It was unusual in that it featured only sixteen episodes as opposed to to the usual twenty-six and many weren't happy with the quality of the episodes either. The crew seemed like a pretty decent bunch, all things considered, but not all of them were immediately likeable, and the stories weren't really prime Trek material either. This second season was definitely back to normal as far as the number of episodes was concerned but did it do any more to sway opinion of the new show? Here's hoping!

We do at the very least get a decent variety of stories this season. In addition to the episodes highlighted below, we see Nog again, albeit as an idiotic Kazon child, the Doctor thinks he is real and everyone else is a hologram, Kes gets all horny (and gross), Harry makes it home but not with Voyager, Chakotay meets some Indians, the ship's interior gets rearranged, Janeway is mistaken for the daughter of some old dude, Paris and Janeway turn into lizards and get it on, the superbly-creepy Suder comes to prominence, B'Elanna ties to outsmart an intelligent WMD, some Q bunghole turns up, Tuvok has to babysit some irritating kiddies, Harry dies (although luckily there's a spare), Janeway and Chakotay fall in love (kind of) on a windy planet they're quarantined on, and of course, those pesky Kazon oafs turn up a few more times! These are the episodes that stuck with me the most though: 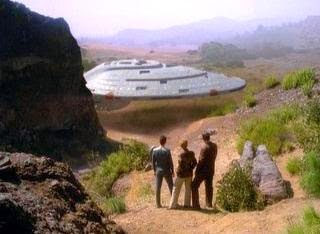 This season opener begins as many previous episodes have - with the discovery of a distress signal. This time, however, it's a rather older signal than usual, as our Captain discovers when she quickly finds the source - a 1930's aircraft from earth. It turns out the planet on which it's located is actually home to a sizeable population of humans, all descendants of a small group abducted from earth in 1937 and brought across the galaxy to work as slaves. Of course, the ever-resourceful Voyager crew had already found and revived some of these "37's" who were in stasis and they, along with their descendants, then give Janeway a tough decision to make by offering to allow any of the crew to join their settlement rather than face the 70-odd year journey back to Earth. Does she allow as many to remain behind as want to, potentially leaving herself with an insufficient crew, or does she make them stay aboard regardless? Hmmmm. I do enjoy these 'humans from the past' episodes that Trek throws up now and then, though, and this one does pose an interesting question or two. Nothing special but very enjoyable anyway. 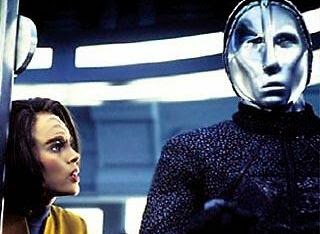 Any episode that has a big helping of the lovely B'Elanna is fine by me and this is a good one. It begins with the discovery of an inactive robot drifting in space. It's brought aboard Voyager and, over Tuvok's objections, our feisty engineer is quickly able to get 'Automated Unit 3947' up and running again. His first request is that she design a prototype from which more of his 'people' can be made - something they're currently unable to do. Janeway says no as it's a violation of the Prime Directive, so 3947 kidnaps her and forces her to do it anyway. Besides the fact that she's now a captive, this gives B'Elanna a problem when she finds out why the silvery clankers want some companions - they're engaged in a war with a golden equivalent who have been fighting each other ever since they destroyed the races that created them. Oops! Of course, B'Elanna is renowned for being able to effortlessly achieve the impossible, so the job itself is sure to pose no problems for her, but how can she in good conscience contribute to a war, even if it is being fought by bumbling automatons? Good old B'Elanna always finds a way. 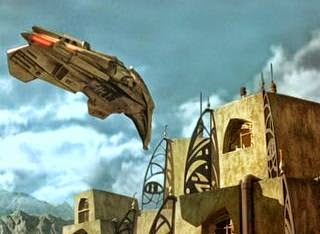 The Federation/Marquis mixture on board Voyager seems to have been going swimmingly so far but after yet another attack by those idiotic Kazon imbeciles costs a Marquis life, Janeway finds herself being lobbied by his former colleagues who are fed up with her strict adherence to Federation principles when lives are at risk. Her solution is to attempt forming an alliance. First choice (for some reason) is Seska and the Kazon sect she ran off with but the good captain soon decides the best approach is to unite the warring Kazon sects. Bizarrely, she aims to do this by using one of their most hated enemies, recently befriended by Neelix, as mediator. This, astonishingly, isn't entirely welcomed by the big-haired cretins and, as the picture above shows, ends up with a scary ship taking a sneaky peak into the meeting room (purely for curiosity's sake, obviously)! It's one of those episodes where you just know Voyager is going to end up even worse off than it was to start with but it's still highly enjoyable to see precisely how they get screwed over, at least partly because of Janeway's characteristically-ferocious response! 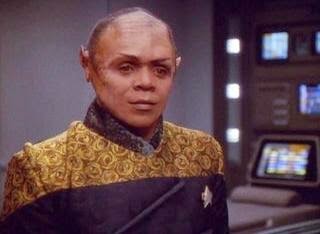 The Star Trek writers love to pose moral/ethical dilemmas for our crew (and, by extension, us as well) and this episode features one of my favourites in any Trek series. It's all thanks to that worryingly-error-prone transporter again too. Best pals (*ahem*) Tuvok and Neelix are collecting botanical samples from a pleasant planet they found but when they transport back they are all merged into a single being! The resulting abomination, who names himself Tuvix (get it?), looks like a cross between the two crew members (the plants are represented by patterns on the uniform). He shares both of their memories and exhibits personality traits from them both as well. Since the Doctor is unable to reverse the process, he is accepted into the crew, quickly becoming a popular and valuable member. A few weeks later, though, the Doctor develops a 'cure'. The trouble is, Tuvix, now a unique individual himself, understandably doesn't want to 'die' by being split back into Tuvok and Neelix. Quite a pickle for Janeway, then, who is responsible for the safety of all three crew members. Fantastic performance from Tom Wright as poor old Tuvix too :( 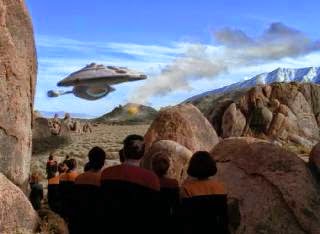 The early seasons of Voyager kept on trying to made those bumbling Kazon oafs into credible bad guys (despite the fact that the Borg don't even consider them worthy of assimilating) and this episode - Voyager's first two-parter - is their boldest attempt yet. It starts with an apparent Kazon defector getting picked up and sure enough, his obvious trap is soon sprung on the clueless crew. Before she can blink twice, Janeway finds her precious ship surrounded by Kazon vessels, then getting boarded, and soon afterwards finds it's no longer even under her control! The ship's new commander soon finds a nice primeval planet nearby though, and dumps the befuddled crew on it before taking off for untold adventures. Luckily, before the ship was lost, Tom Paris was able to sneak off in a shuttle, but aside from him the season ends much like it began - with the mighty craft landing on a planet. This time, however, it leaves without its usual occupants. Oops! As a Trek two-parter (or the first part of one), Basics is far from the best, but the second part is much better than this rather predictable (but still enjoyable) opener...

Look out for my Season Three picks soon!