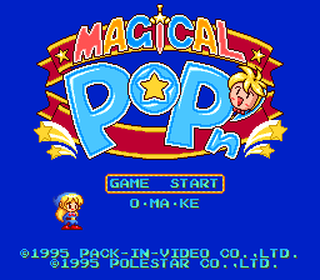 Cute platformers have always been among my favourite types of game so I'm always very pleased to find another one, and this is one I knew little of until recently. It was released towards the end of the Super Famicom's life, only in Japan, and stars a young girl known as 'Princess'. Surprisingly, she actually is a princess, and apparently a rather 'energetic' one too, and her quest is a seemingly simple-yet-arduous one - all she needs to do is retrieve 'The Magic Gem' from the ghastly Demon King who has snatched it, intending to harness its incredible power and bring an end to the era of peace enjoyed by the happy people of To'ahl. The trouble is, it and he lie six long stages away. After leaping out of a high castle window in pursuit of the (probably) self-proclaimed King (and apparently being none the worse from her fall), Princess sets out after him, but her progress is unsurprisingly slowed by the many monsters and idiotic creatures that stand in her way.

Being a young girl she's very quick and nimble and is able to run and jump around the various stages and their landscapes with ease. As well as these most basic of moves, she can perform a short slide and is armed with a small sword which she can swing repeatedly from a standing or crouching position and aim downwards from mid-air. She is also able to push stuff (an effort that rarely pays dividends) and has access to six magics, though all but the first must be unlocked during play. Each magic has basic and advanced forms which use up differing amounts of Princess's stockpile of stars. For example, the first such magic - Energy Beam - fires off either a small energy blast which costs two stars each time, or a much larger and more powerful beam that damages every enemy in its path, and this costs eight stars. The other magics are called Exploding Wand, Magic Chain, Ice Blast, Fire Blast, and Inner Sonic and their uses are not limited only to offensive assaults.

Some handy magical skills include the ability to pass/destroy certain types of barriers or swing around with a grapple/chain, and even some of the offensive magics have a non-destructive advantage. The Ice Blast, for example, can freeze otherwise-dangerous fiery areas, but of course, many of the magical skills are destructive and include projectiles for the basic magics and screen-wide destructo-blasts for the advanced ones, and this is just as well since most of the foul enemies regenerate as soon as their area scrolls off the screen. This can be annoying as there's a greater chance of taking damage when retracing your steps, as can be necessary on occasion, but it also means there are more items to collect as some enemies leave goodies behind upon defeat. These are most commonly stars to boost your reserves, which are also found in groups here and there anyway, often in secret areas, but also includes candy and cakes to replenish Princess's energy levels.

Her life is represented by hearts, each of which is good for two hits. A candy will replenish half a heart, a slice of cake replaces a whole one, and a full-size cake will fill her energy to maximum. Luckily the first two are fairly common but far less so are Hearts and Golden Busts. The former will add a whole extra heart to Princess's life-meter and collecting three of the busts will give her an extra life. Each stage has at least one mid-boss as well as a proper end-boss and happily your magical attacks can be used here as well as during the stages. There are also the usual hazards like spikes and fire here and there but it's not an overly tough game. Once you've sussed out the attack patterns of the bosses (which shouldn't take too long) the main challenge comes from trying to rush around too quickly and bumping into enemies. There are over forty normal examples and some of them are pretty basic, just standing in plain view or moving in simple patterns, but others are much sneakier and can take you by surprise if you don't know where to look for them.

Some of them hide underground, for example, others leap all about the place, and some have swords of their own or fire projectiles at you. Some will only attack when you stand perfectly still (and then lunge at you very quickly). They're certainly a varied bunch too. Easily one of the most immediately appealing aspects of Magical Pop'n is its wonderful visuals. There are not really many fancy tricks here besides some nice wibbly effects, but the backgrounds are varied and the foregrounds and sprites are detailed, nicely coloured, and beautifully drawn, with the latter including some great animation as well, especially on Princess who is surely one of the cutest, most appealing characters ever seen in a game! Her movements are fluid and include 'overbalancing' and 'pushing' animations as well as appropriate actions for just about everything else like looking up and squatting down, with the latter even seeing her hiding under her hat after a few seconds!

All of her actions are accompanied by a cute noise of some sort too, such as surprise when looking up or a shocked/scared sound when ducking down. It's all tremendously cutesy and succeeds in endearing Princess to us while playing. Well, it certainly worked on me anyway! As well as all of her cute ooh's and aah's, the rest of the audio is of a high standard too, also including some lovely tunes for each stage. Everything here is top, top quality really. Unlike many games that come at the end of a system's life, it doesn't really push the SNES to its limits, it's just that the graphics and sound, characters and stage design, and everything else is so well done. There are some levelling-up aspects to the play (kind of), and it's sometimes necessary to retrace your steps or you might need a certain special item to pass a given point, so it's almost an arcade adventure as opposed to a simple platformer. The stages are also surprisingly varied and don't always seem totally linear either.

They are mostly made up of a few scrolling sections connected by doorways and there's often more than one to choose from. Some lead to rooms full of stars or bonus items, others to new areas, and some to mid-bosses, and it's not always obvious which it is without some exploring. This is particularly true of the last stage which is almost a labyrinth where it's easy to find yourself back where you started! Making your way around the many landscapes is a pleasure too. Aside from a slightly clunky grapple/rope thing (it can be hard to 'latch on' to some swing points), control of Princess is faultless and exploring is great fun and very addictive, even with the respawning enemies. It's a fairly long game too, and there are plenty of hidden areas and secrets to extend its life-span even further. I suppose about the only thing that might put a potential player off this game is its cuteness (I know some gamers are too 'tough' to consider cute games) but it's not over the top in that regard, it's just unbelievably appealing. A real hidden gem.