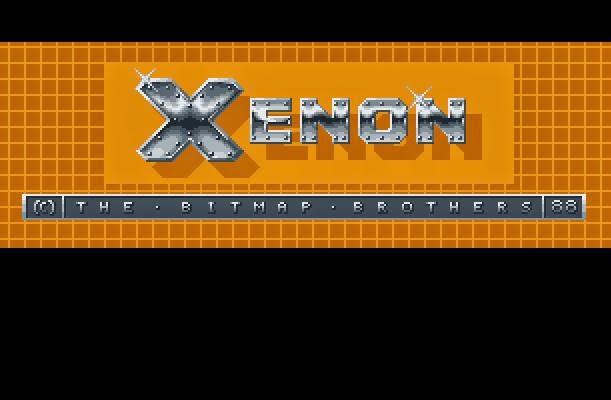 The numerous home computers of the 80’s were never really known for the quality or quantity of their shmups but one that seemed to get a lot of press time was Xenon, the first game by legends-in-the-making, the Bitmap Brothers. It’s a vertical-scroller but one that's rather unlike most other efforts of the time. You play the part of Darrian, a Federation fighter pilot who intercepts a distress call from Captain Xod whose fleet has come under heavy attack by the wretched Xenites, a hostile race who had inundated the Federation almost overnight. As the closest ship to the fleet's position, Darrian is compelled to respond (though hardly enthusiastic about it) and heads for their last location which is the other side of four sectors crawling with pesky Xenite filth.

It's not this back-story that makes Xenon stand out though. That's down to your unique vessel. Each of these sectors that makes up the journey from home to the fleet is divided into four zones and at certain points during them you have the option of switching back and forth between two different types of craft - a ground dwelling 'saucer' craft and a airborne jet fighter. You start the game as the saucer which can move freely in eight directions, with the screen only scrolling if/when you move up it. With a press of the space bar, however, you can switch to the fighter which moves up the screen automatically. Both craft are initially armed with pea-shooter guns but these can of course be upgraded by collecting the lettered icons that dot the landscape.

These usually appear in the flaming wreckage of the enemy craft and guns and include forward lasers, side lasers, homing missiles (lasts for 15 shots), fuel (to top up your limited supply), armour (temporary invincibility), speed-ups, and 'balls' which take two forms. One type are fixed to the wings of your jet fighter, the other floats around following your ship, and both offer additional fire-power. Perhaps the most helpful power-up, however, is one that extends the range of your guns which to start with only each about half-way up the screen. Annoyingly, your fuel supply is shared by both craft but it's enemy fire that reduces it rather than simply moving. Even more annoyingly though, if you actually make contact with an enemy your craft will explode immediately.

As you might guess given the dual-functionality of your craft, the enemies consist of ground-based and airborne varieties. Both kinds include groups of small craft with names like Ladybirds, Eyes, Kites, Spinners, and several others, and there are also many gun turrets which can either be on the ground or atop buildings, so even these necessitate frequent switching between saucer and fighter. You'll definitely spend more time as the fighter though, as the second and fourth stages feature no surface for the saucer to trundle around on. All four stages feature bosses too, known as Sentinels, which appear at the mid-point and end of each stage, and each of them has a weak point that must be pummelled before they bite the dust. If you last that long!

Indeed, for as would come to be a defining feature of Bitmap Brothers games, Xenon is very tough going. The fighter craft in particular is a fairly large vessel and feels larger owing to the unforgiving collision-detection and, as with many such games, it's also fairly short, lasting less than 25 minutes for learned players. The graphics are decent enough while it lasts though, with everything looking crisp and well-defined. Most of the sprites are small and some are basic in design but it's a very distinctive looking game, especially the first and third stages with their grid-based landscapes and metallic structures to be steered around or, more probably, flown over. The music is pretty good too but it tends to get drowned out somewhat by the rather loud shooting effects.

All the usual stuff is good enough but the defining feature of Xenon really, is the saucer/fighter combo, and I'm not sure it works as well as it could've. Aside from the stage one and three bosses you're not likely to spend more than a couple of minutes as the saucer through the entire game and the few seconds here and there when you do need to switch just feel bolted on to me. Surely some dedicated sections of the stages could have been conjured up to make both craft seem vital to your mission's success? Maybe even a maze-like section that you can't fly over en route to the boss or something like that? Oh well, it certainly doesn't make the game worse, it just seems like a bit of a waste, and unsurprisingly the idea was abandoned for the sequel.

As it stands, Xenon is still a game ST and Amiga owners were proud to have on their favourite system, but I'm still not sure how enjoyable it is to actually play, mainly due to the high difficulty. It often seems impossible to avoid all the bullets, with success literally being a case of remembering where near enough every enemy in the game is and being correctly positioned, often with the necessary power-up as well, to destroy them the second they loom into view, and even then you may have to contend with the slightly sticky controls. Your craft even seems to change all by itself now and then which can be mighty inconvenient too! Niggles aside though, it's not a bad game and was clearly a landmark release for the micros, but that difficulty will put a lot of players off.