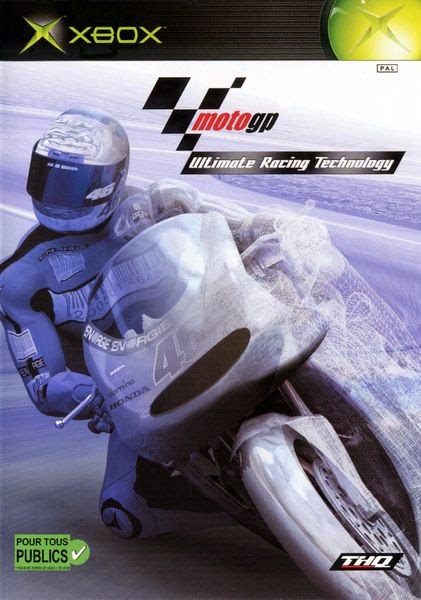 I must say, this fangled Xbox contraption may be bordering dangerously close to 'modern gaming' but it's been pretty helpful so far too. A couple of months ago I wrote about how I've played and liked very few 'flying games' over the years only to find a superb example on Microsoft's leviathan, and now I've found what certainly looks to be a top quality motorcycle game, another genre I've encountered few of (aside from Hang On).

Even though I hadn't played it, I actually thought I was already familiar with this series but, to my surprise, I've discovered there are two MotoGP series' running simultaneously - this one for the PC and the Xbox consoles and a separate one by Namco for Sony's consoles which seems a bit silly since they use the same logo and all. Hmm, oh well. I can't speak for Namco's game then, but this MotoGP game and is a rather splendid one. It's quite arcadey in nature, despite being officially licensed, and consists of Quick Race, Arcade Championship, Grand Prix Series, Training, and Time Trials modes as well as an Options screen which allows you to change stuff like the volume, number of laps, gear type, circuit map on/off, direction arrows on/off, etc, as well as change the controls, load or save a 'guest rider', and access a load of unlockable stuff.

The Quick Race mode was my first stop which offers three difficulty levels, a choice of around 30 racers taken from the real 2001 MotoGP season (a third of whom are locked at first), and the first three of ten circuits to race on. It doesn't take long to get to grips with the controls and, after a bit of wibbling around, you should be able to put in some decent laps. There's not a tremendous amount to see here though, and after a quick whizz around Japan's Suzuka circuit I was moving on. 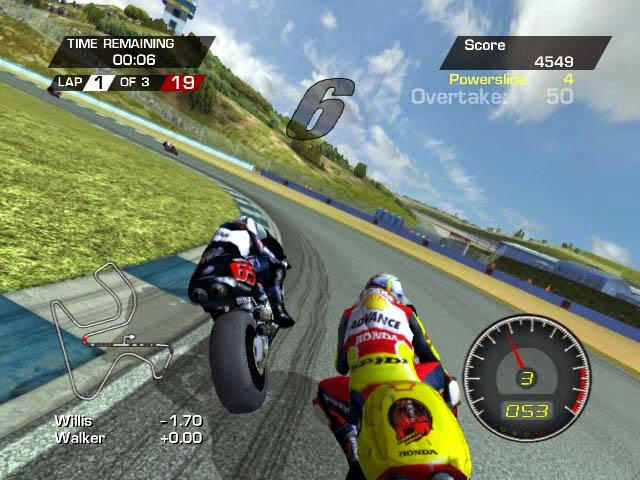 The Arcade Championship mode is similar to the Quick Race but allows you to race on a succession of circuits in a points-based championship. Each race consists of 29 racers and takes place over three laps split into several checkpoints. Points are then awarded based on not only your finishing position but also for performing tricks and special manoeuvres such as wheelies, burnouts, and endos. I knew little of this sort of tomfoolery, however, so some more investigation was clearly required.

Indeed, despite being very accessible, I still thought it might be an idea to hone my skills before tackling the Grand Prix mode, so I headed for the Training section. This features a number of exercises designed to improve the four main aspects of your racing - cornering, braking, top speed, and acceleration. There are five tests for each skill and it's possible to achieve either a silver or gold ranking for each. As I soon discovered, learning these skills, and preferably achieving a gold ranking in them, will help a great deal with the Grand Prix mode. 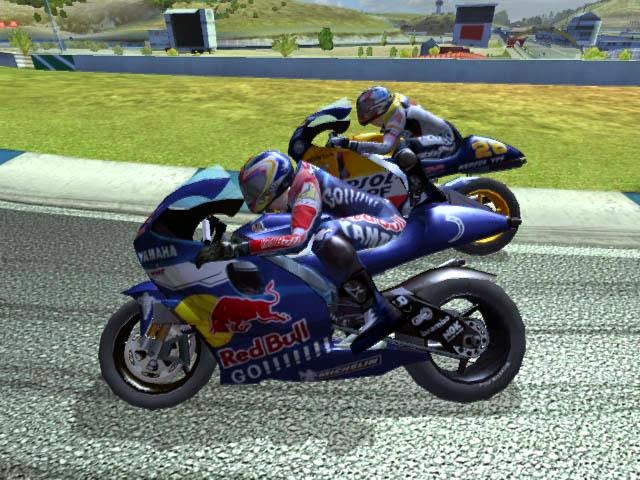 This is the 'proper' championship mode and the first thing you'll need to do to enter it is to create your own custom rider. You can choose his name, appearance, age, and nationality (though apparently not gender), and then need to choose leathers and a bike (including design/colours) before deciding on a name for your team. Your rider is then equipped with whatever skills you've gained from the Training mode so, if you barely touched this part, he will unsurprisingly be rather slow and oafish to control.

Apart from the first few examples, it's likely you'll be racing courses for the first time in this mode, so it's fortunate there's a 'Free Practise' option as well as Qualifying and Race options. Whichever option or play mode you choose though, the actual racing takes a bit more practise than with a car-based equivalent. It's not like you can just bash your way through the racers or around corners here after all, and nor can you veer off-road, intentionally or otherwise. Well, I suppose you can if you want to but it won't do your race progress any favours at all! 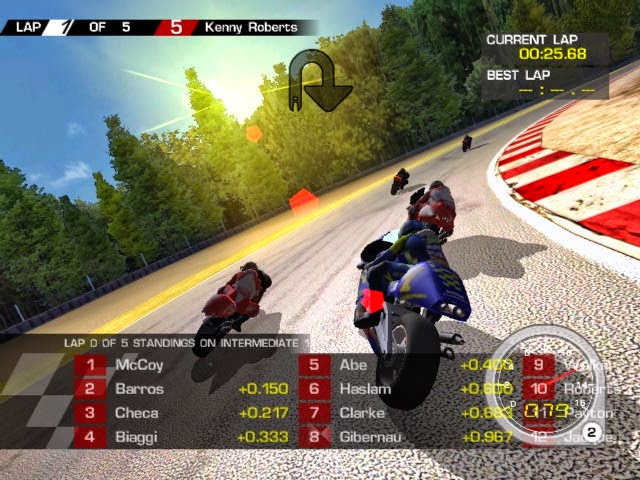 The edges of the course actually seem to magnetically attract you to some extent when you get close to them and straying onto the grass/gravel is not only damaging to your speed but it can even bog your bike down so much that you fly off in a spectacular crash too, and bumping and jostling around with the other riders can do the same, so those training skills are definitely needed. Yes, even the braking. Once you're skilled and confident enough, though, the racing here is fantastic. There are lots of other racers and their AI isn't bad (some will get angry with you for racing too aggressively), and the sense of speed is face-warpingly superb.

Actually, one of MotoGP's biggest strengths is its visuals which really are gorgeous. As with most racing games of this type, the scenery isn't particularly varied, but the quality of what is here is exceptional. The tracks, bikes, riders, and everything else really isn't too far from photo-realistic thanks to some detailed textures and lovely lighting/shading including lots of lens-flare. This graphical splendour is actually one of my few problems with the game though. Races take place at various times of day, you see, so if you're racing along a thickly-wooded section of track at dawn or dusk, there's so little light you can barely even see where you're going. Realistic perhaps, but mighty inconvenient at times too! 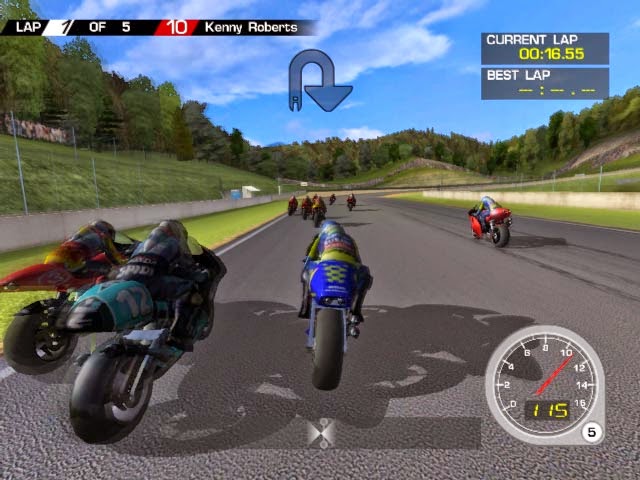 This problem was so bad for me on a few occasions I've actually been wondering if there might be a problem with my Xbox itself but luckily there are literally only a few sections of track in the whole game that cause me problems, and even then only at certain 'times of day'. One disappointing aspect of the game that's definitely not my Xbox's fault is the audio. The bike engines and other spot effects sound okay but the dull thudding music is really quite poor, although you can at least create your own custom soundtrack using songs ripped to your console's HD.

These are about the only bad things I can find to say about MotoGP though. It has a good number of play modes, including up to four-player split-screen racing, and there are difficulty settings to suit players of near enough all skill levels. Staying on the track takes a bit of practise, of course, but it's really not a hard game to get into at all, and provides a ton of exciting racing as soon as you do. Add to this the lovely visuals and you've got a top racing game generally, and almost certainly the best motorcycle-based example I've played to date.