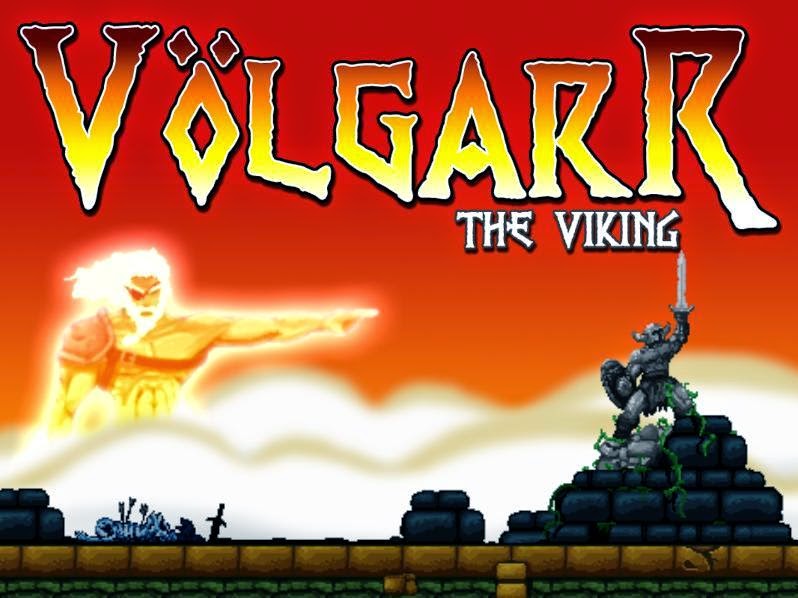 The indie gaming boom of the last few years has given us lucky oafs more choice and variety than ever before. That can only be good news, of course, and I have taken particular delight in the many retro flavoured titles that have been steadily appearing lately. Some of them have been sequels/reboots, whether official or unofficial, while others have clearly been inspired by favourites from the past, and Völgarr the Viking definitely falls into the latter category. Völgarr is a great warrior who fell in battle 'to overwhelming numbers defending his homeland after slaying hundreds of adversaries.' His mortal life is restored by Odin, however, on condition that he rid the land of the terrible dragon Fáfnir who has been sowing chaos throughout the land of Midgard. If Odin is powerful enough to do that, it does make you wonder why he didn't just flick Fáfnir away himself though.

Upon beginning this quest it's clear right away from where Crazy Viking Studio drew their inspiration, too, and that's definitely Rastan. Our reanimated hero is also a pants-wearing, sword-waving barbarian type, for one thing, and it's his job to battle through seven hellish worlds crawling with unimaginable terrors and all manner of horrifying creatures and traps - more than forty different types according to the game's blurb. They include bipedal lizards of several colours (and therefore differing strengths and armaments) who are the stock sword-fodder of the game as well as numerous other kinds of warriors, such as lizard/monster, human, and undead types (including good old skeletons). Nature also apparently conspires against Völgarr, however, as there are many flora/fauna-based enemies as well such as bees, spiders, snakes, poisonous spitting plants, giant clams, and other ghastly abominations.

As if all these simpletons weren't bad enough, in the best traditions of platform/combat games there are also lots of other hazards and traps too, like fire pits, spikes, wall-mounted arrow-shooters, and all that kind of stuff. Sadly for such a brutish fellow, Völgarr does not react well to any contact from these enemies or traps either. He starts the game with a shield, and some power-ups give him one too, but contact from a hazardous source will see him lose it. Any more contact while shield-less and he becomes a crumpled pile of bones much like his many foes. Surprisingly, you are given infinite lives, but if you're thinking that makes our Nordic hero's quest an easy one, you're very very much mistaken! Indeed, aside from its similarities to Rastan, if there's one thing this game is famous for, it's for being as tough as nails. Tungsten ones. Coated in carbon steel. Encased in diamond. In the core of the Earth.

So yes, it's quite a tricky one, this, in spite of Völgarr having a variety of moves and weapon upgrades available to him. The mighty sword he starts with remains his primary weapon throughout the game and he also starts with a wooden shield called Vidr Skjoldr. Power-ups are found during play, mainly in chests that can be smashed open. These always contain the next most powerful item to the one you have so you can't just jump straight to maximum power, but items appear quite often. They include Hammar Skjoldr (hammer shield), Baldr's Skjaldborg (helmet), and lastly Tyr's Villieldr (flaming sword), with any damage sustained seeing him revert back to the previous power level. Serving as his secondary weapon through the game are an unlimited supply of spears. These are thrown across the screen and, as well as damaging enemies, they also stick into some walls and can therefore be used as makeshift platforms, and this can prove very useful, even essential on some sections.

Völgarr is much more agile than old codger Rastan too. In addition to the usual stuff, his 'Viking moves' include a Spin Attack, a Downward Stab, a Dodge Roll, and a Shield Block, and they are all ultra-useful once you get the hang of the controls which are pretty intuitive and responsive. Most of the enemies can be exploded into their base components with only two or three sword strikes too - only one, even, in the case of many stock examples - so I have often found myself wondering if it really is such a tough game. Indeed, watching a skilled player slice through it makes it seem like a piece of cake, but then I play it again to check and find that, yes, it is indeed still an incredibly tough and unforgiving game. And this, as I later discovered, is merely the easier of two difficulties known as 'Path of the Crystal', but if you can defeat it you'll unlock the even more insane 'Path of the Valkyrie'! Oh dear :(

One reason so many gamers seem to find Völgarr's quest so difficult, myself included, is that many of the numerous enemies pour onto the screen from both directions without limit, so it's not generally a game that permits you to hang around taking your time, despite the lack of a time limit. Another reason could be the lack of restart points, so when you die - and you will, often - you'll have to battle through entire sections over and over again. The bosses at the climax of each stage are also a big challenge, especially if you reach them without a shield (you might as well not even bother trying!). The main reason it's so tough, though, is simply that it was designed to be, very deliberately. From the placement of every enemy and hazard to the positions and arrangements of the platforms, and the path Völgarr must take over them... It's all been done to make it a very challenging game, and it has worked.

Of course, there are many players around who are skilled or patient enough to make relatively light work of this Viking adventure, and for them this is a fantastic, near-faultless game. There are some '30+ maps' to explore through the seven worlds (apparently - I doubt I'll ever see the later ones!) and they look superb. The first six are known as Jungle of the Claw, City of Akron, The Blighted Lands, Foot of the Volcano, Sky Knight Armada and Fafnir's Tower, while the last world is nameless and shrouded in mystery. Most of the areas consist of castles or medieval cities so there's a lot of dark-coloured stonework to see but it's all nicely-drawn and suits the game style perfectly, and the sprites are superb. They're varied and very detailed, and feature stacks of silky-smooth animation, in death as well as life! Even better is the grand orchestral soundtrack which gives your ordeal a real sense of purpose.

It is certainly a game that's easy on the eyes and ears then, but an ordeal it will prove to be for most of us too! It's possible to power through the game in less than 30 minutes if you're skilled enough but I think I can safely say that most gamers will still be struggling away after 30 hours, never mind 30 mere minutes! Besides, even if you do manage to reach the end, there are still lots of treasures to look for (including 'Mjölnir's Power' which is hidden on each stage) to rack up the points. Sadly, though, I expect most players will give up long before then, and I can understand that - they would have to be slightly masochistic to stick with it, but it is an extremely well made game that will be warmly welcomed with open arms by the very specific kind of player it was aimed at. For me personally? I don't hate it for being so hard but I don't expect to ever finish it. Would it have hurt to make it a bit easier? Probably not but, as it is, you'll shout, you'll swear, but you'll still probably keep playing it anyway...