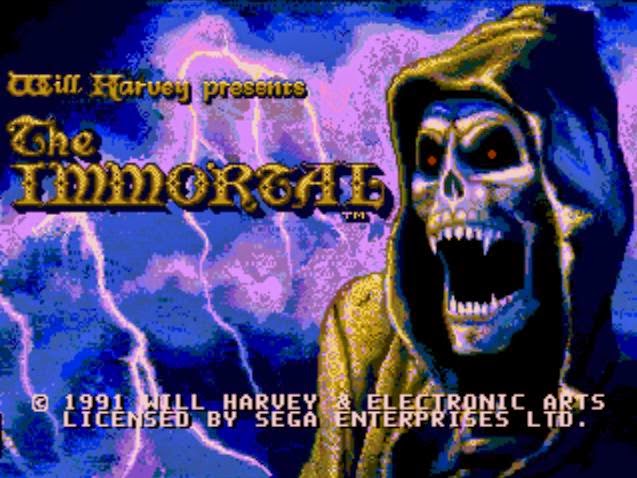 There were many examples of very striking promotional artwork being produced for games in the 80's and 90's, and one that I was recently reminded of after it having passed out of memory long before is The Immortal. How could I forget that sinister-looking Grim Reaper type fellow that adorned all the adverts, cover-art, and even title screen of the game though? Who can say? Having now returned to the game for the first time in an age, I've found myself wondering who he actually is. He's certainly not the character you're tasked to play through the game as, who, though nameless to mere mortals like us, is much fleshier and appears to be from the land of the living. He's also rather wizardly in appearance, in the finest traditions of Gandalf and other grey-robed, staff-wielding, beardy old codgers. Whatever his name and background may be though, he has a rather daunting mission before him.

The start of the game finds Beardy at the entrance to a large dungeon or labyrinth-type place, at the end of which lies his mentor, Mordamir (which sounds like a bad-guy name to me but never mind). There are eight isometrically-viewed stages in total which are not particularly large but do contain many traps and monsters, as well as a good few magical items that are needed to overcome most of them. The monsters are generally the most straightforward obstacles to pass. Beardy is able to walk about the stages freely unless blocked by hazards, obstacles, or the odd locked door, and the horrifying enemies are encountered regularly. There are two main types - goblins (green) and trolls (brown) who are apparently at war with each. Either type will be more than happy to engage you though, and, while you may sometimes merely be warned off, most will attack!

If the characters come into direct contact the view switches to a close-up of the two combatants in a black void where they must trade blows until only one remains. Either can jab or slash left or right with their weapons and can also dodge incoming attacks, and the battle continues, unsurprisingly, until either you or your opponent are dead. There are two gauges for each fighter - one represents vitality and the other fatigue. The more a character slashes and jabs away, however, the more tired he'll get, and the less he'll be able to dodge your attacks or dish out his own. If you are the victor, Beardy uses his final blow to deal a particularly gruesome end to his opponent (such as blow their head up or summon lightning to zap them), and it was this more than anything else that The Immortal was most famous for. Maybe it was even one of the first games to feature gore.

The important thing at this point is that the mutilated corpses of most fallen enemies, as well as any already-lifeless-bodies you might encounter, can all be searched for any goodies they might contain. This often includes gold, and there are a few merchants to be found here and there, but they may also include other items including all sorts of useful and even magical items. There are far too many to detail here but some of the more memorable ones include fireballs which allow you to take out enemies from a distance, maps which may show you the location of hidden traps, a disguise ring that lets you pass for an enemy, a magic carpet which levitates you over floor traps, as well as stuff like vitality potions, gas bombs, amulets, and several magic spells. Collectibles are actually so abundant that you shouldn't even need to fight the enemies too often!

But therein lies a problem: some of them may hold particular items you need, and you won't know which of them holds what until... you've fought (and defeated) them. But you'll very likely notice long before this how prominent the trial-and-error theme is here. Some things are rather obvious - use keys to open locked doors, shoot lanterns to illuminate the room, etc - but the biggest problem is the various traps. Passage through the stages is generally via a succession of rooms linked by doors. Some of the rooms are tiny while others a few screens in size, but pretty much all of them contain at least one hazard, and sometimes these are not even visible until it's too late. Take our giant worm friend in the screen above, for example, who appears through the floor and eats you if you step on a particular unmarked spot, or pit-traps where a floor tile disappears beneath your feet.

The latter is at least escapable but the game features a lot of things like this and I have no doubt that it will drive some gamers crazy. If you're the type of player who has the strength of will to persevere, however, this is an interesting game to play through. Many of the other traps, like fireballs/arrows shooting from walls, flames/spikes from the floor, etc, are far more obvious (though still often tough) and there are some memorable enemies besides the stock goblins and trolls such as slimes, bats, will o' wisps, and the sizeable arachnid horror shown above. There are some great touches here too. You can sleep on the pile of hay found somewhere on each stage, for example, thereby recovering some vitality (and more story is revealed during Beardy's dreams too), and it's also possible to take advantage of the goblin/troll war and even ally yourself with one of the sides.

It's also a very atmospheric game. The audio largely consists of incidental music rather than proper tunes but they work well enough, and the graphics, while definitely not varied (the same floor/wall patterns are used through most of the game), are nicely detailed, and the multitude of gory/violent ways Beardy disposes of the enemies are superb. It's a shame there's such a bland border around the playfield though - surely some game stats, info, maps, or an inventory of your items could've been featured here, at least? Oh well. The Immortal isn't the RPG it was intended to be (there's a fair amount of exploring and special items but it's actually a fairly linear affair) but there are some nice ideas here and, despite some faults such as some slightly clunky controls, the high difficulty, its trial-and-error nature, and poor replay value, it is a memorable and rather enjoyable adventure, and one that it's satisfying to do well at too.