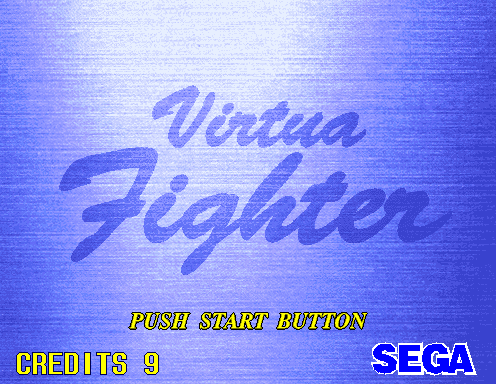 Though polygon graphics had been around for some years already, it was Sega’s seminal Virtua Racing that really kickstarted the gaming industry’s obsession with them. Though it may have merely been a glorified tech demo, it still proved to be a mighty enjoyable game as well. If the new technology was to evolve and achieve any sustained success, though, it needed to be proven by more than one game, so Sega soon cooked up another, and wisely went for a totally different kind of game too. The result was Virtua Fighter, a one-on-one fighting game born partly out of this need to show off the Model 1 board some more, but also no doubt due to the ongoing popularity of the genre prompted by Street Fighter II a few years before. Capcom’s game is a rather cartoony and unrealistic affair, of course, but Sega were aiming for more realism with their game to go with the more realistic graphics too.

There are eight characters here to choose from in total - two ladies and six gentleman - and they are all themed fairly stereotypically. You've got the gi-wearing kung-fu guy (Akira), a Chinese action film star (Pai Chan), her father (Lau Chan) who's a wise 'grand master' type, a shinobi shōzoku-wearing ninja (Kage-Maru), a beardy Aussie fisherman (Jeffry McWild), a face-painted wrestler from Canada (Wolf Hawkfield), and a college student, race car driver sibling duo (Sarah and Jacky Bryant). This collection of fighty misfits all have a singular goal too, as detailed in their brief biographies, and that's to take down the boss of the game, a shiny silver clanker called Dural who has seemingly irked the whole bunch of them somehow, probably due to her being a maniacal creation of the evil J6 Corporation or some such waffle. All we need to know, though, is that it gives us an excuse to see these new fangled polygons in a totally different environment.

Unlike many of the fighting games that were doing the rounds at the time which required more and more fingers to be able to play, Sega simplified matters just a smidge by incorporating only three - Punch, Kick, and Guard. The latter allows you to defend against incoming strikes but the other two offer a wide range of basic close-range attacks. A vast majority of these are exclusive to each fighter and appropriate to their given style of fighting. For example, Akira has a load of punch/kick combos, Wolf has lots of throws and slams, and of course the ladies tend to be slightly more athletic while the larger male fighters are slower and more powerful. Various combinations of buttons and/or directions pressed in quick succession pull off all a given character's moves, including a decent selection of more powerful special moves, and these button-sequences can get quite long and a little complicated to perform. Hope you've got a good memory!

There are no projectile attacks or any other crazy stuff here though. All the moves are 'proper', realistic combat moves. That said, you can perform 'bonus' moves on downed opponents, such as jumping onto them as they lay stunned on the floor. This effectively doubles the amount of damage you can do with some attacks but it can get rather annoying if the CPU or a friend keep doing it to you! It's possible to roll backwards to avoid this though, but only if you are quick enough and your opponent is slow enough. Other than the standard energy-bars, fights can also be won be forcing or knocking your opponent out of the 'ring' - the square area of land the fight takes place within - and each fighter is faced over a best of three rounds. Defeat all eight including the metallic nincompoop, Dural (who has access to every character's move-set) and the game is won. It sounds simple, and it is rather simple too, despite the revolutionary visuals.

Of course, it goes without saying that near enough every aspect of the game pales in comparison to many other arcade and console examples of more recent years and, if you discount the graphics, it was simpler even than many fighting games of its day, but it almost seems unfair to even recognise that. It was released as a game in its own right though, so it's only fair to consider it as such, and in that capacity it's... not tremendously great if I'm honest. The number of polygons/textures are extremely limited by today's standards, obviously, but that doesn't affect things too much. The characters are distinctive enough and nicely animated and the backdrops and arenas, whilst basic, are at least varied. Yes, there is a bit of glitching here and there, but that's only to be expected really. I'm surprised there is so little actually, but there are some nice touches too, like being able to knock a hat or item of clothing off an opponent.

Everything still moves around really smoothly too - it's not nearly as hard on the eyes as many other early polygon-based games. Well, except when the camera zooms in after each round is won (check out Sarah's super sexy pose above!). Regardless of how you feel about the somewhat chunky fighters, however, one aspect of VF that has always been rather good in my opinion is its music. Each of the characters have their very own signature tunes and most of them are very catchy numbers. These days though, in the age of using fifty trillion polygons to ensure realistic hair/boob/etc movement, the most important thing is how the game plays. The jumping has always seemed a bit too floaty for my tastes but the three-button layout works very well, especially for oafs like me who often struggle with Capcom's more flowing style, with most moves being easy to execute - if you can remember the sequence!

I don't really think it's aged nearly as much one might expect either. The only real problem with Virtua Fighter is one that the series has always had for me, and that's simply that it's not very exciting. I've played this as well as some of the sequels all the way through, and it's fairly interesting learning and performing the moves for each character, but it never really gets the blood pumping or the palms sweating. Maybe it's the lack of ridiculous, over-the-top moves, maybe it's the simple structure of the game... I'm not really sure. All I know is, every time I play VF I leave feeling distinctly unfulfilled. I guess the whole point of the game, much like Virtua Racing before it, was more about Sega saying "Hey, look what we can do, and it's going to be even more amazing next game!", and it worked for the most part too - it was another superb technical achievement for them, and another landmark title, but it's not really a classic game.