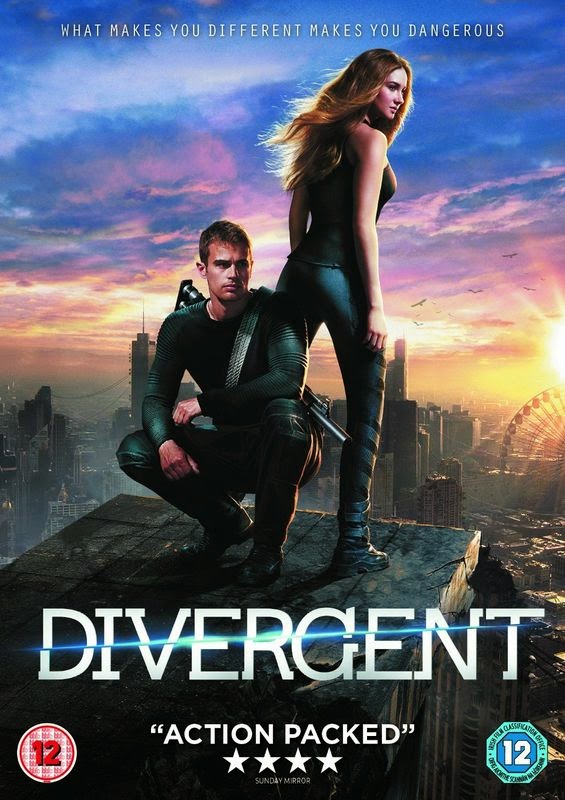 The movie world has been seeing quite a number of war-ravaged Earths reinventing themselves in the last few years, or at least particular parts of our poor old planet anyway. Most recently we've had the districts and oppressive Capitol of Panem which have hosted some exciting adventures and a potential coup d'état, and now comes the first film adaptation of another trilogy of novels set in a not-entirely-dissimilar-looking world. Here, our precious home has been subjected to a vast, unspecified war - much was devastated and even the climate has been changed, to such an extent that lakes have dried up. The survivors live in what's left of downtown Chicago which has been sealed behind an enormous, all-encompassing wall, and here, society has been divided into five factions.

Each of the factions are dedicated to a particular aspect of society: Abnegation (The Selfless), perform many of the public services in the city and comprise the government, Erudite (The Intelligent), is where the scientists and academics are found, Dauntless (The Brave), are charged with the protection of the city, Amity (The Peaceful), perform a different kind of public service to Abnegation such as farming, and Candor (The Honest) value logic and honesty above all. Children are brought up in whichever faction their parents belong to but, upon turning 16, get to choose their own. Shortly prior to this they undergo an aptitude test to determine which faction they are best suited to but they are able to choose any they like. It can be risky though - choosing a faction they're not suited to or failing to make the grade during their initiation/training will see them kicked out where they'll become 'Factionless' or the equivalent of homeless bums.

Explaining all this to us at the start of the film is Beatrice 'Tris' Prior (Woodley) who, along with brother Caleb (Elgort), has grown up in Abnegation. During her psych test, however, Tris is told she does not conform to any one faction and is therefore deemed a 'Divergent' and that isn't good. Divergents are considered a threat to the delicate balance of the faction system and, by extension, society in general, so Tris is understandably advised by her tester (Maggie Q) to keep it secret. However, when it comes to the Choosing Ceremony, both she and Caleb opt for different factions - Dauntless and Erudite respectively - and since they're then immediately whisked off for their initiation/training, their time with their parents is over. For Tris and the other Dauntless intiates, this mostly involves physical combat and weapons training and she finds the going very tough.

To start with it looks like the whole film will be based around this. As a former Abnegation member, Tris is far from accustomed to the overtly physical and outgoing nature of Dauntless, despite having admired them from afar, and she struggles with the training. News that the weakest few initiates get booted out provides a bit of motivation though, but her fortunes during this time are fairly predictable: she makes several friends like Christina (Kravitz), Al (Madsen), both former Candors, and Will (Lloyd-Hughes), but they have a particularly harsh and unrelenting trainer in Eric (Courtney), one of the Dauntless leaders, who takes a disliking to Tris. She gradually becomes close with another trainer, Four (James), however, and her performance slowly improves, etc, etc. It's all very well done and makes for enjoyable enough viewing but, aside from Tris's efforts to keep her Divergent nature hidden, it does seem very by-the-numbers for the first couple of acts.

The transformation of Tris is only half the story though. There are larger issues lurking in the shadows and sure enough, before too long, in typical dystopian fashion, signs of more sinister schemes start to surface. In particular, some of the Erudite brainboxes have begun to resent Abnegation's leadership role, and their own leader, Jeanine (Winslet) may even have designs on the hot seat herself. Her goals and methods might raise eyebrows but it remains a fairly predictable film for the most part. It's also one whose mythology you might find it difficult to buy into. The devastating global war that destroyed our civilisation is never explained or elaborated on in any way except to say that it happened a hundred years ago. This is a little frustrating but it's also pretty much a given with this kind of story. The civilisation that replaced it, however - the faction system - is explained, and it's actually pretty ridiculous when you stop and think about it.

In the film's world, this system has apparently kept the peace for the last century, but it must surely cause at least as many problems as it solves, and for us viewers it raises a dozen or more major but fundamental questions. Something else that bothers me is that this is supposed to be a ravaged world recovering from this catastrophic 'great war'. Our population was severely depleted and supposedly nothing remains beyond the walls of Chicago, and yet the leaders and law-makers of this new world don't seem to value life too much, and nor do they seem too concerned with what must be a rapidly escalating Factionless (i.e. poverty stricken and homeless) population. I suppose putting too much thought into these things is pointless though. The film, and indeed the book before it, is what it is, and the Hunger Games generation will likely lap it up anyway. In all fairness though, it is still an appealing film thanks an excellent and likeable cast.

Some of the more established stars like Winslet and Ashley Judd (as Tris's mother) are as good as ever but some of the younger, lesser-known faces also impress. Zoë Kravitz in particular is great as 'the best friend' but the film belongs to Woodley and James who have good chemistry together, but also hold their own individually too. The former was previously best known for a teeny TV drama and her first impressions here made me question her ability to lead a big-budget film like this, but she soon proved me wrong. Her meek, subservient Abnegation qualities never go away completely but she does become a reasonably convincing badass as well. Theo James is someone I knew even less about but he too holds the screen well with his mysterious brooding. It's mainly thanks to these two that Divergent is a lot more enjoyable than I expected it to be, and perhaps more so than it deserves to be too. Hunger Games' crown is safe for the moment though.