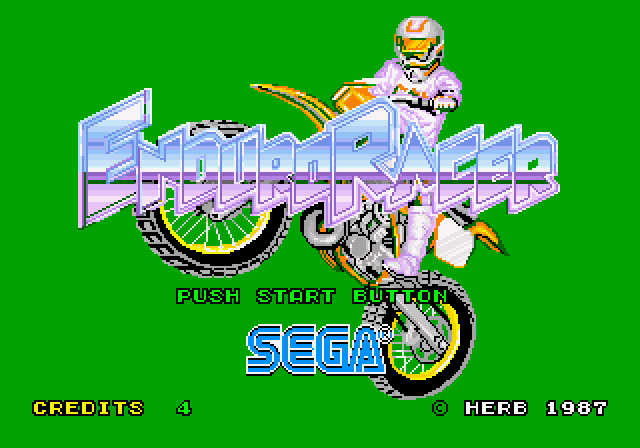 When most gamers recall arcadey motorcycle games, or indeed Sega motorcycle games if you want to be more specific, they immediately think of Hang-On. Perhaps younger gamers might be more familiar with Manx TT Superbike, but one game that often seems to get forgotten is Enduro Racer, and that’s a bit peculiar. It is, after all, different enough from both of those games, and from anything else that was around at the time, to be worthy of remembering, surely? Well, I've only remembered it myself recently, and I was never fortunate enough to find the 'proper' version of it in any arcades to begin with - I enjoyed the Speccy version long ago and, as some of you may remember, I have already looked at the Master System version here at Red Parsley which was basically an entirely different (but decent) game - so I'm looking forward to giving this arcade original a try.

Many consider Enduro Racer to be little more than 'Hang On with dirt bikes' and that pretty much sums it up really, but it also means it's a quite different game to play. It is much slower for one thing, and rather than featuring long winding courses full of increasingly tight corners, it focuses more on finding ways to knock you off your bike. There are five stages in total, with one leading directly into the next, and each features numerous track-wide jumps and multiple obstacles that you'll need to jump over or steer around. Unusually, your bike has no gears but it can perform a wheelie (done by pulling the handlebars back). This gives you a slight increase in speed but also makes it more difficult to steer, and so should only really be used on straights empty of obstacles and other riders. The wheelie is most useful - essential, in fact - when it comes to the jumps though.

Hitting one dislodges your rider and will result in a costly tumble when you reach the ground again. Pulling a wheelie here actually causes him to stabilise the bike and land safely but there are usually numerous rocks immediately after the jumps just waiting to send you flying as well. Pulling a wheelie before you hit the jump will cause you to fly much higher and further, avoiding the post-ramp obstacles, but you are also much more likely to land in an unfavourable location - amidst the roadside trees and signposts, for example - especially if the jump is just before or in the middle of a corner, as many of them are. Later stages also feature various obstacles just strewn around generally, not just around the ramps, as well as other riders and the odd buggy/jeep here and there, so there's plenty to knock you about. This combined with a very unforgiving time limit makes Enduro Racer a real toughie!

This was probably done because it is also a very short game. Indeed, after some practise, some players will be able to race through the entire game in about five minutes! Luckily it's great fun up until that point. It's running on the same hardware as Hang-On so it has a similar graphical and audio style to Sega's earlier effort which means limited sound effects, nice music (though just the one tune), slightly muted colours, reasonable sprites featuring just a little animation, but lots of splendid scaling effects as always. In fact, the scaling here is even more splendid! Hang-On, for all its fastness and curviness, was a completely flat game (topographically speaking). Enduro Racer, on the other hand, is anything but. From the first stage to the last, the courses seem to meander up and down just as much as they do left and right, and this suits the game superbly as you might imagine.

They aren't quite as varied as one might've hoped though. The first is the standard grassy stage while the second and fourth stages both feature dusty desert settings with many craggy rocks, and the third and fifth stages are very watery. The latter appears to be located on a beachside but the former has water either side of the road and even covering the road on some sections. Your bike is able to scoot across some areas but in others you'll sink like a stone. There are not really any problems here that a little practise won't solve, but to finish the game you'll pretty much need to zip through all stages without making a single mistake. If you manage this I imagine it will soon get a bit boring, but, as mentioned, its leapy bumpy action is really rather enjoyable up until that point. It's not the best Super Scaler racing game but I prefer it to Sega's earlier two-wheeled effort.