Due to the nature of my work I always get a decent amount of time off work over Christmas and New Year and this is often a time that includes numerous movies. This year I received a few as gifts and I gave a few to my wife too, and we watched nearly all of them. Some of these will hopefully receive full reviews (eventually) but until then, here is a round-up of some others viewed over the holiday period: 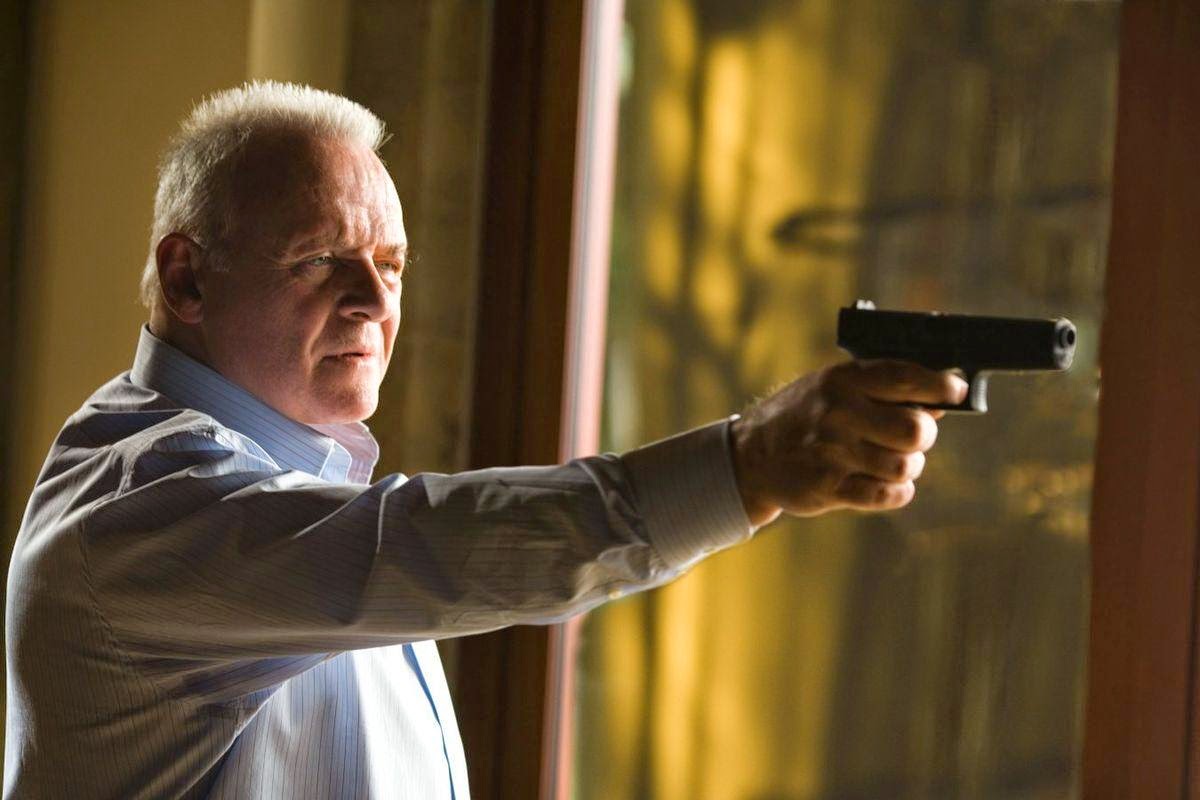 I'm not entirely sure why now but I've been after this film for years. Happily, I received it as a gift at Christmas along with several other titles but it was the first I tried. It stars Anthony Hopkins as Ted Crawford, a wealthy Irish engineer living and working in LA who, upon discovering his wife has been having an affair, confronts her and then shoots her, leaving her in a coma. When the police arrive he immediately confesses and is duly arrested. The case is taken on by cocky deputy DA, Willy Beachum (Ryan Gosling) who is expecting a quick open-and-shut case to round off his current job before he moves on to his lofty new position with a prestigious law firm. Unfortunately, Ted is released on a technicality and Willy, unhappy at the blemish on his reputation, gets involved in a battle of wits with clued-up Ted who believes he's staged the perfect crime, and is soon obsessed with bringing him down. Sadly, I didn't find this quite as engaging as I had imagined I would but it's just about saved by the lead cast and their superb performances, without whom this might just seem like an elaborate TV show episode. Not the most gripping crime drama but worth watching 6/10 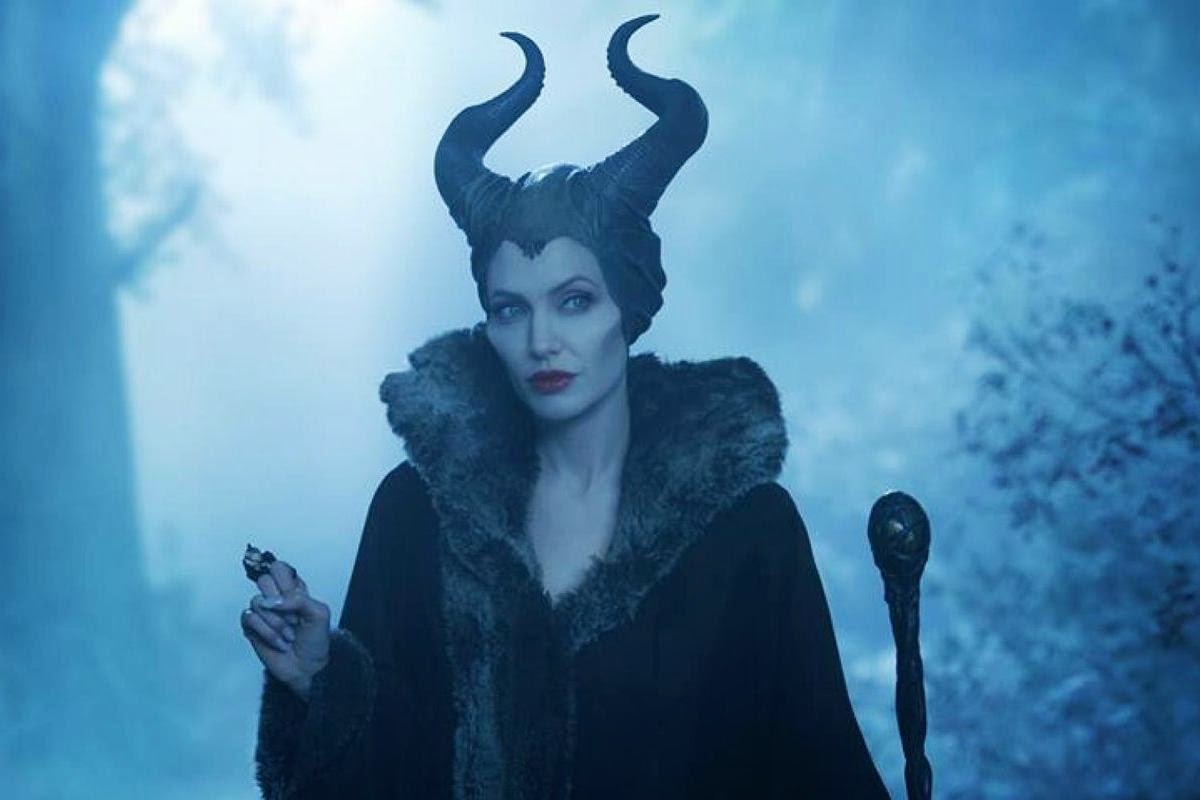 This rather striking Disney release was one gift received by my wife, courtesy of a certain someone who knew she wanted it, and as I didn't know until watching it (somehow), it’s a somewhat different take on the story of Sleeping Beauty. As may be obvious to everyone but me, it’s told from the point of view of the 'evil' fairy of the title (Jolie) who’s actually not evil at all. At least not to begin with. She's just a young, powerful-but-innocent fairy living in the beautiful, magical forest realm of the Moors which shares a border with a human kingdom ruled by the corrupt and greedy. After being betrayed by her only human friend, she places a curse on the his first-born daughter, Princess Aurora (Elle Fanning), to fall into a 'sleep like death' on her 16th birthday. After observing and eventually meeting the delightful Aurora, however, she begins to regret her decision, but even she cannot undo the spell. Oops! Despite looking at the famous story from a fresh perspective though, this is still a fairly predictable film, but luckily the dazzling special effects and a fantastic performance from Jolie make up for the short-comings and I was surprised to find that I really enjoyed it... 8/10 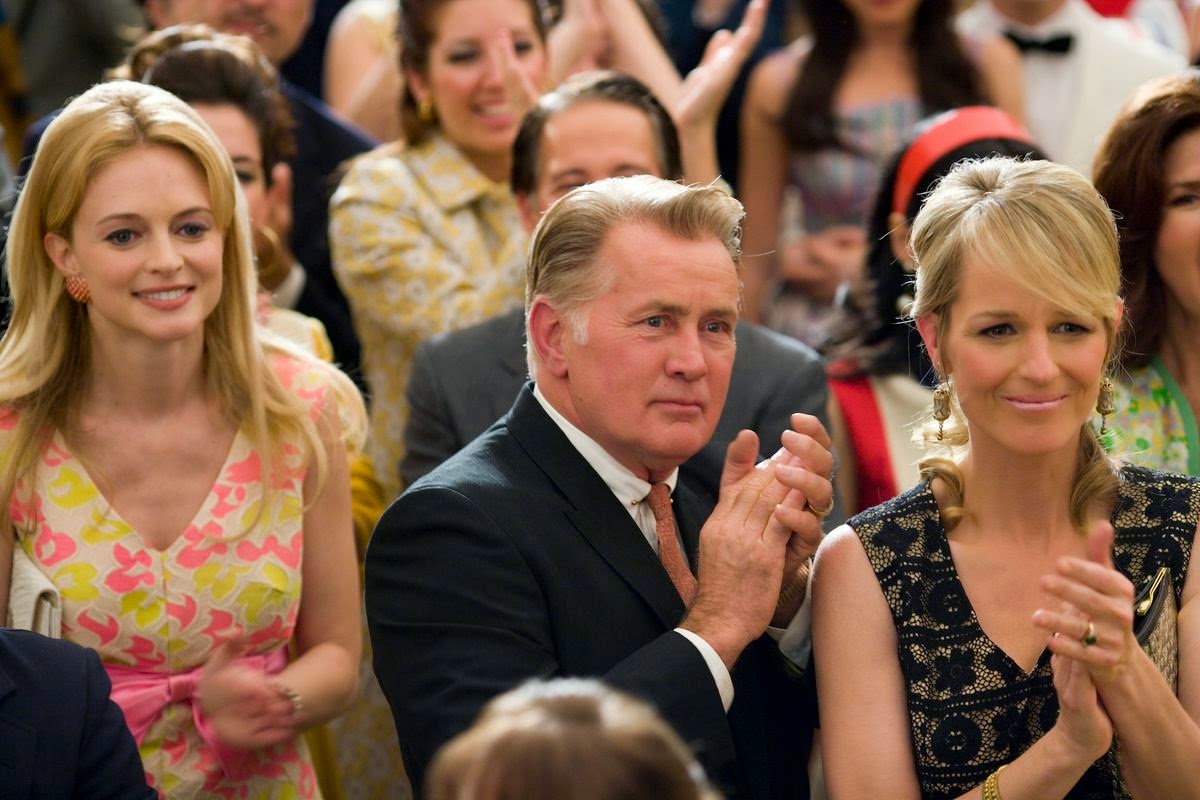 My wife has long talked about this film as being one of her favourites so, of course, I was pleased to be able to watch it with her. It was directed by a certain Emilio Estefez and takes place in and around the Ambassador Hotel in LA leading up to the shooting of Bobby Kennedy there in 1968. It's a film featuring a ton of characters played by one of the biggest and best casts I've seen in a film! Stand-outs include Anthony Hopkins, Christian Slater, Laurence Fishburne, Heather Graham, Martin Sheen, Sharon Stone, Helen Hunt, Shia LaBeouf, and Freddy Rodriguez, but there are loads of others and the film pretty much just flicks back and forth between them all as they go about their business on the fateful day in question. Some are staff at the hotel, some are part of Kennedy's campaign staff, and, as well as sharing their Bobby-related enthusiasm and getting excited about his impending visit, they all have their own things going on as well. Some may argue that there's too much going on in the lead up to the inevitable tragedy but it's a well-acted and well-directed film that definitely holds the attention throughout its two hour run time. Wifey has good taste... this time! 8/10 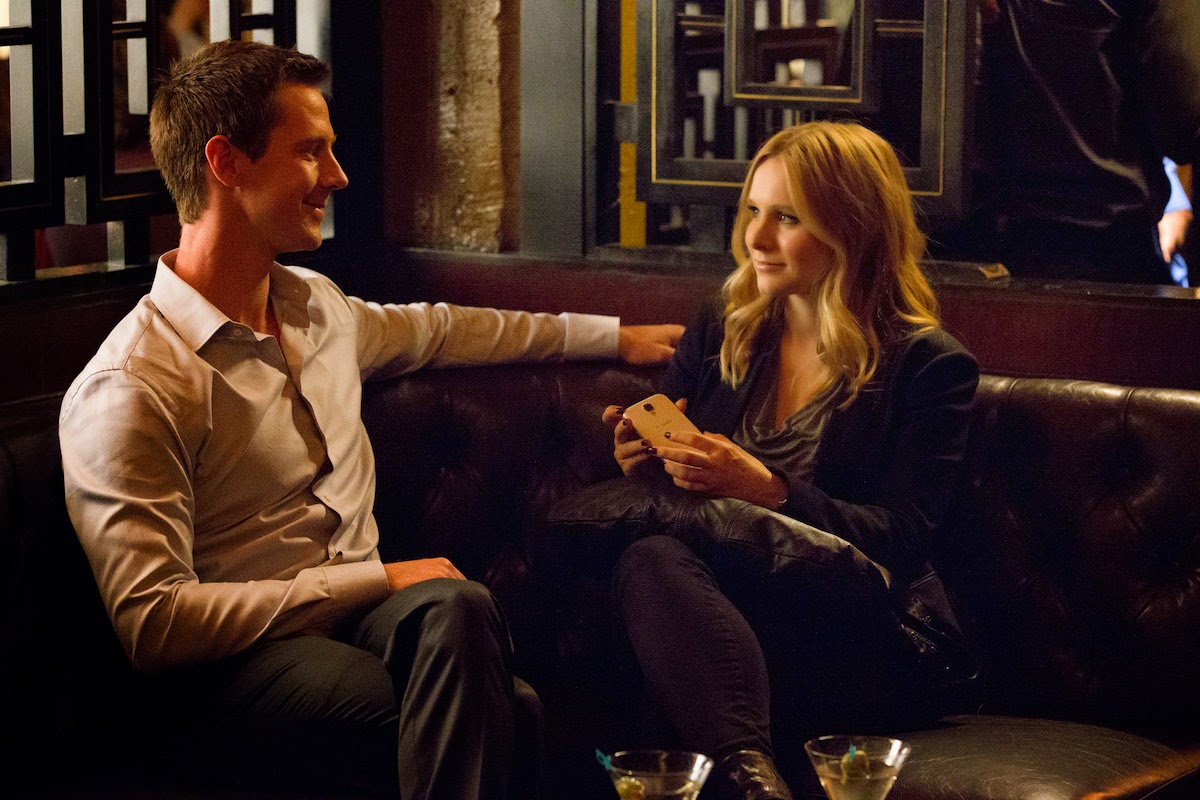 I had actually never seen Veronica Mars prior to the arrival of this film (which was another of my wife's gifts) and didn't even know what it was about but apparently it was a show about some 'teenage sleuth' which concluded with the young lady of the title moving away from her home town, where the show was set, for a job in the 'big city'. This kickstarter-funded follow-up catches up with her nine years later just as she's lured back home by her ex-boyfriend who's been accused of murdering his girlfriend. Although clearly a film aimed at the show's fans who financed it, and it does seem like a special treat just for them, it's not just an excuse for them to see what their favourite characters have been up to - there is actually a fairly decent story going on. There are deaths and cover-ups and blackmail and most of it is involving people Veronica (Kristen Bell) has known for years, but it doesn't really require existing knowledge of the show to be enjoyed. Despite earning a theatrical release, it's very much a TV-movie in look and style too, but this was still a surprisingly intriguing 100-odd minutes... 7/10 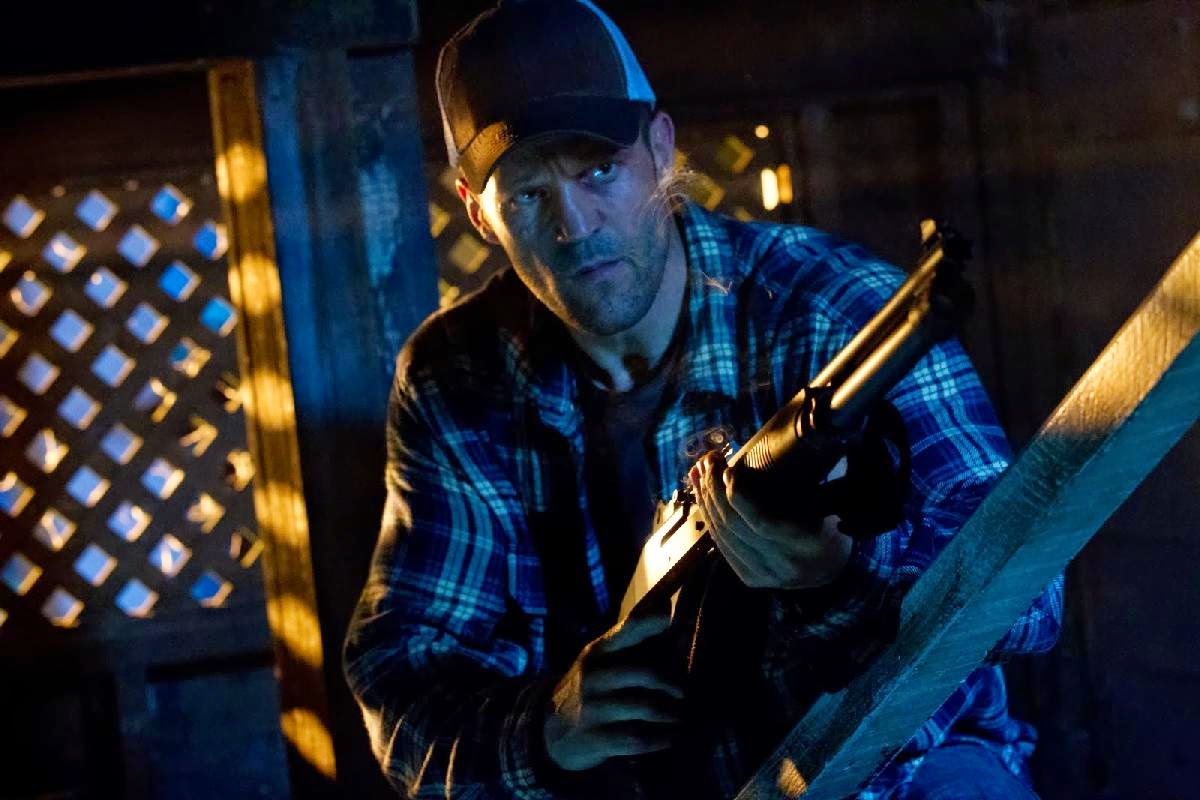 And... when the DVD's had all been viewed (which they actually hadn't but never mind that), it was on to Netflix where I found this generic-looking Jason Statham vehicle. It's the kind of film that's dead easy to suss out just from its three-line synopsis which basically involves the UK's favourite arse-kicker, as DEA Agent Phil Broker, moving to a quiet Middle American town with his young daughter after a rather eventful conclusion to his previous undercover operation. However, I'm sure you're as staggered as I was to learn, his past eventually catches up with him. With his very home and daughter under threat, he is forced to revert to his kicky, shooty past ways - something that he does very well. So far so Statham, and indeed, this film will be very familiar to fans of his previous efforts but, despite continuing to struggle with accents, he's still more than adept at the drama and action alike and this is a reasonably entertaining outing for him and his feet/guns of vengeance. Homefront is far from a stirring, thought-provoking piece of cinema, but if you go in with realistic expectations, you shouldn't be too disappointed. Cross him at your peril... 6/10

Eeek, so many films and TV shows watched lately, need to catch up with covering them here! Watch out for more reviews and round-ups soon :)