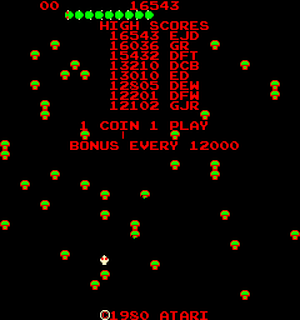 Most of the earliest of arcade classics were the 'first' to do something-or-other but Centipede can lay claim to two firsts that I can think of - it was the first well-known game to be programmed by a woman (Dona Bailey alongside Ed Logg), but also (and probably less obviously), it was the first shoot 'em up to charge you with zapping something other than aliens. Apart from these interesting points, though, it was pretty standard fare for its day - a succession of single-screen stages, each featuring evil creatures advancing down the screen which must be shot before they reach the bottom. In this case, 'they' are actually just one. A long one. 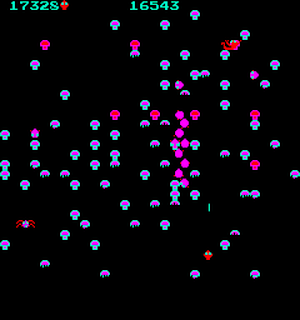 Of course, in keeping with the title, this predatory creature is a heinous centipede; one that wriggles left and right down the screen, changing direction and dropping down a level whenever it reaches the edge of the screen or one of the many mushrooms that litter the screen, seemingly at random. Shooting any section of the segmented creature other than either end will cause it to split into separate smaller centipedes. The only object is to eradicate every 'piece' of the creature(s) but, surprisingly, any that reach the bottom of the screen just hang around there getting in the way rather than costing you a life. This immediately proves very handy. 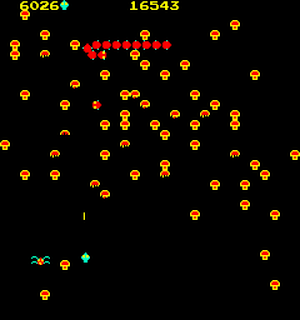 Indeed, it actually means Centipede is noticeably easier than most similar games, particularly since your gun (or whatever it is) can move anywhere around the bottom fifth (roughly) of the screen. It has a very slow rate of fire and there are a few other garden pests around, like the spiders that move diagonally around 'your' area and the scorpions who poison any mushrooms they touch (making them drop down the screen), but I've still found the pace of the game to be refreshingly manageable. The audio and visuals aren't as distinctive as other games from this era, with only differing mushroom/sprite colours to distinguish one stage from the next, but it's quite a charming game too. Mushrooms are rarely unwelcome, after all, and there's something about bug enemies that I prefer to aliens for some reason as well (perhaps because they're scarier in real life). The comparatively un-brutal difficulty makes it more accessible than many of its contemporaries and it is enjoyable to play, but you could also argue that it's less exciting for the same reason. The trackball controls are simple and accurate though, and the collision-detection is fair, so it's a pretty great game really, and a classic for sure, but I just wish the aesthetics were more appealing.