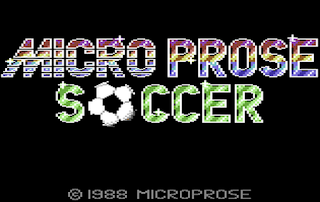 For the first part of this feature I decided to look at probably the oldest football game that I actually remember seeing/hearing about first-hand, but for this instalment I've gone for a slightly more recent one. It's a game I had also heard much about (though not played), and I've never heard anything but glowing praise for it, so I was slightly more hopeful this time that my quest would bear some fruit. A strength of Match Day was its great presentation and that was the first thing that struck me about Microprose Soccer too. As well as allowing you to change several aspects of the gameplay there are even two different styles available - the normal 11-a-side game that most of the world enjoys and the 6-a-side indoor game that was popular in the US around the time of the game's release.

These actually have to be loaded separately from either side of the tape/disc, but the pleasant options screen on both gives you the same choice of four modes - Microprose International Challenge, World Cup Tournament, Soccer League, Two Player Friendly. The first of these is basically a one-player arcade mode wherein you play against a series of ever-tougher opponents represented by the national teams (normal game) or American league teams (indoor game). The World Cup Tournament isn't massively different, allowing you to take control of a national team on a quest for the grandest prize of all (in between the computer rounding up the scores of all the other games). The Soccer League mode, meanwhile, is a multi-player tournament - up to sixteen players no less - although only two can play at once, obviously.

The helpful menu screen also lets you sample a Demo Game and has a Name Bank which allows you to enter your own team names, and a Control Panel that lets you change several game settings including the length of games. I had to be brave enough to actually try playing the game eventually though, and first impressions were actually pretty good. The action is viewed from directly overhead and the graphics are pretty decent, including some nice detail on the players, pitch and various animations, but more important are the controls. Happily, this aspect of the game is superb, with player movements being as quick and responsive as you might hope, and things have been kept nice and simple too. The sole 'action' button performs a sliding tackle when you don't have the ball and obviously kicks it when you do have possession.

There isn't an actual charge meter or anything but the longer you hold down the button the further it can be kicked (to an extent), but even more splendid is the much heralded 'banana kick' you can perform by holding left or right diagonals after kicking. Not everything is great though. Like Match Day, passing is rather slow and fiddly here so if you're anything like me you're more likely to just run end-to-end with the ball, doing your best to dodge tackles. Another nice feature is the variable weather which basically means it rains now and then. The problem with that is, if you perform a tackle during a storm you'll slide halfway down the pitch before stopping. By this time, of course, your opponent will be long gone and may well have scored too! This was no doubt done for comedic reasons but it can be a little annoying as well.

Something else I found annoying was the player-selection system. There are two different options for this but neither works terribly well, mainly because the rather zoomed-in viewpoint and lack of match 'radar' means you often can't even see the player that's under your control when it switches from one to another because he's not even on-screen, and this can at times result in aimless running around until you find your guy! Sometimes it's not easy to spot your players at a glance either, as most shirt-colours are not very bright and not much of them is visible. These issues are not game-breakers but they can reduce enjoyment of Microprose Soccer somewhat, for me at least. For the most part, though, it's still good fun and still well worth playing.

Indeed, for while Match Day was undoubtedly a good game back in its day, it has aged pretty badly and isn't really enjoyable anymore; Micoprose Soccer is a game that still is good. It's clear from playing it that some areas of it could've been improved a bit (and probably were in subsequent games) but nothing is bad or annoying enough to dissuade you from having yet another go. The presentation is really nice, including a nice rolling demo, instant replays of goals, and probably my new favourite SID tune on the menu screen (although the in-game music isn't so hot), but more importantly it's great fun, especially with more than one player involved. Even in one-player though, few things in gaming are as satisfying as scoring with a long-range banana kick! There are a few niggles here but this is now my favourite footy game (so far).