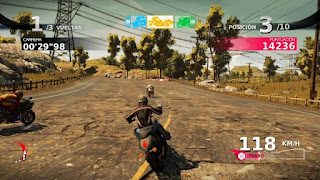 All those open-world driving games that have been appearing lately have been rather cool, so when I saw this game advertised recently I immediately thought it would be a motorcycle equivalent. You know, kind of like Test Drive Unlimited or something but with biker gangs? But alas it is not. It's actually little more than a bog-standard racing game featuring open-road circuits (though no regular traffic), with the only innovation coming in the form of the three different types of bikes available. These are Superbikes, Roadsters, and the Custom bikes (big spluttery Harley-type things). The twist is, you can switch between them while racing. That's right, simply pressing the relevant button will somehow switch your bike 'on the fly' with no discernible loss of speed! 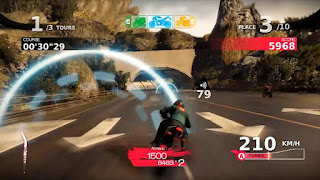 Prior to playing, I wasn't really sure if this sounded great or stupid and, to be honest, now that I've played it I'm still not sure if it adds much to the game or if it's just a tacked on gimmick. Each class of bike is supposedly suited to a particular part of a given course (superbike for the straights, roadster for the windy bits, custom for the rough ground), and the game will prompt you when to switch bikes, but most of the time it's easier just to continue using the superbike, with the roadster seeming especially pointless. That point aside, there doesn't seem to be much of note here at all. There are lots of races and plenty to unlock but, from my first impressions at least, it's not a game that's likely to hold your attention for long enough to see much of it.