I don't buy as many games as I used to these days but when I do I rarely mention it anywhere online. Some people, of course, need only the teeniest excuse to warble on about the smallest addition to their collection, with some even going to the effort of making 'unboxing vidoes' (which have always made me chortle), but every now and then there comes an extra special purchase which is actually worth heralding. For me it came in the form of a Holy Grail of sorts - a game I've wanted ever since I saw it in magazines of the time but never got around to buying. 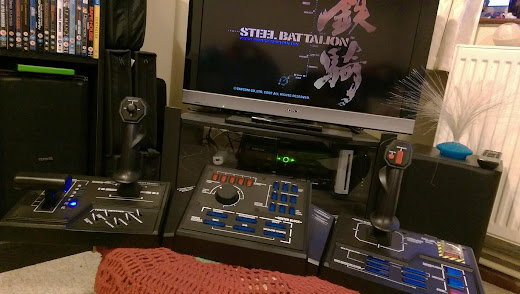 I've been an Xbox owner for around 18 months now and in that time I've built up a sizeable collection of games (almost 100 now, and counting) for an amazingly small amount of money (probably a little over £100), but many of these titles were bought simply because I happened to see them cheap. Prior to actually getting an Xbox there were few titles I knew I wanted, but one I did want was Steel Battalion.

I'm sure most gamers, retro or otherwise, are already well aware of this notorious title, mainly due to its enormous cost ($200 at launch, I believe) which automatically put it beyond the reach of most owners of Microsoft's original powerhouse, but it was a pretty unique game. It's best described as a 'mech simulator' (mechs being those giant battle robots on which our Japanese friends are so keen), with the emphasis firmly on the word 'simulator' - this is definitely no arcadey blaster! 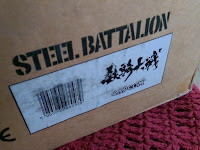 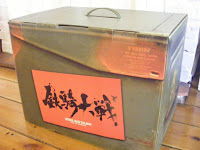 Like many other simulators such as the ones found on the PC and Mac or even on dedicated hardware, playing Steel Battalion is therefore not simply a case of 'left, right, up, down, and fire'. The reason the game cost so much and the source of its enduring fame over the years is down to the fact that it comes packaged with its own purpose-built, and very large controller. It's so large, in fact, that the box it came packaged in dwarfs the console's own box. Even the external brown box (used, presumably, if the game was ordered directly) bears the game's logo, but the box inside was made to look like an actual weapons crate or something too (complete with warning signs!). This by itself is undeniably awesome but the wonders housed inside were even more impressive.

I should probably mention at this juncture that there were two main versions of the Steel Battalion controller. The first was released along with the original game and featured glowy green buttons. The second version featured equally luminescent blue buttons and was released with the second game, Steel Battalion: Line of Contact, and it is the latter version that I now possess. 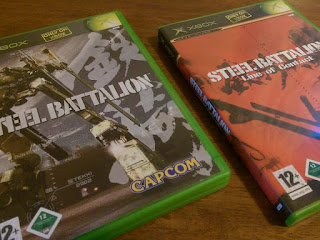 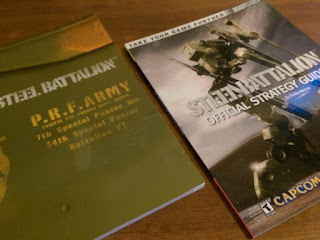 Happily, despite supposedly being marginally less desirable than the green edition, my version has the advantage of being bundled with both games, and also includes an enormous instruction manual, again made to look military-issue, and a somewhat less authentic (but still helpful) 'Official Strategy Guide'. And then there's that really quite remarkable controller which, let's face it, is the main (probably only) reason most people want to play or indeed own Steel Battalion to begin with.

It comes in three sections - middle, left, and right - which must be screwed together using the supplied hex bolts and key, whilst being careful to also connect the pieces using their special ribbon connectors. Then there's the fourth section - the hitherto unmentioned pedals section which features three sturdy, metal pedals. After this is plugged into the back of the main controller, you're good to go, and that means you get to actually use this leviathan you've just spent ten minutes constructing (well, hopefully no longer than that, anyway!), and it's a bit daunting actually. 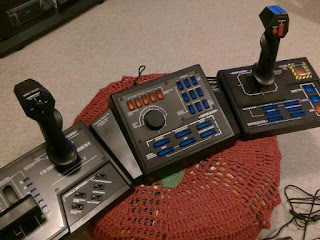 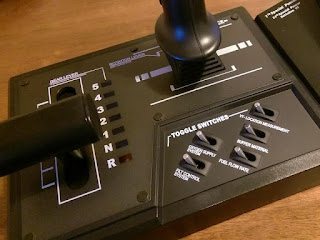 This was partly down to the game itself which, as I had already heard, totally throws players straight in at the deep end with its savage difficulty curve. Indeed, there's not even a tutorial here so you had better spend some time reading the instruction manual before playing! The main reason for apprehension before play, however, is that controller - all twin sticks and forty-two buttons of it (not counting the pedals). I don't care how much of a 'hardcore gamer' you think you are - few gamers will have been faced with anything quite like this.

After the intro sequence, you'll find yourself sitting in your mech, or VT (Vertical Tank) as the game prefers to call them, staring out into its hangar from a first-person perspective. In most games, of course, from here you would simply start moving around and shooting at stuff, but in Steel Battalion? Nothing is quite that simple - here you need to go through the VT start-up sequence. First you need to close the canopy, then hit the ignition button which boots up all its systems.

Then you'll need to flick all the toggle switches on the left side of the controller to activate (in order) the Filter Control System, Oxygen Supply System, Fuel Flow Rate, Buffer Material, and VT Location Measurement. Finally, once each of these systems reaches at least 75% capacity, you can fire the monster up by pressing the start button. If you try and start the VT before the levels are high enough, you'll stall it (amusingly, there's even an actual section in the instruction manual titled 'When Stalling the VT During Startup'). Don't worry though, it's not that hard to mess up! 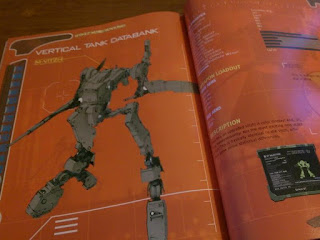 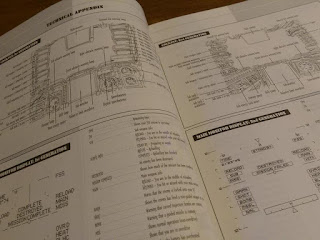 You'll need to be alert though, because as soon as your VT is finally up and running, the hangar door opens and guess what's waiting on the other side? That's right, an enemy VT, which wastes little time in peppering you with gunfire and shooting off the odd missile. If you haven't done your homework, this is likely to be as far as you get in the game too! Your ride can't take a huge amount of punishment and when there's fire and electrical crackles in your cockpit, it's time to bail. If you simply allow it to blow up, you can start again as often as you want, but if you don't eject (using the aircraft-style button, complete with plastic cover), any progress you might have saved is erased. Harsh? Perhaps - welcome to the world of Steel Battalion.

As tough as the game is, though, even I made it past this initial enemy, and the basic controls aren't too taxing to learn. The left joystick only moves left and right and is used to steer the VT while the smaller joystick on the top of it is used to move the camera around. The right joystick moves the guns around and features three buttons - one fires the main weapon (the default is missiles), one fires the sub-weapon (the default here is a chain gun), while the third provides a weapons lock where appropriate, and you'll need to use all three often. 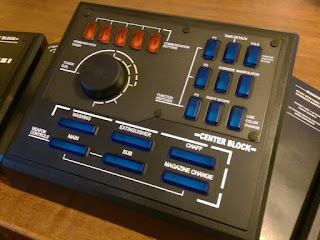 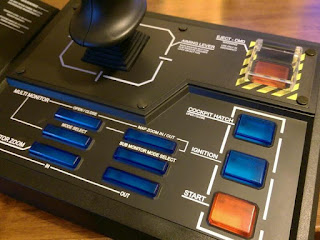 To actually move the VT you'll need to put it in gear (and there are five in total, not counting reverse) and use the relevant pedal... whilst steering it, scoping out the area with the camera, aiming the guns, generally whilst under heavy enemy fire from tanks, gun towers, planes flying overhead, and other VT's... there's a lot to get used to in a very short space of time, and that's before you've even remembered that there are about a million other buttons as well. It does get more manageable after many failures but I quickly realised the hardcore-ness of Steel Battalion's controller is easily matched by that of the game itself.

More on the game and my progress with it in later posts though - I may have been rambling on for ages now but I'm not spending this much on a game without getting at least a few blog posts out of it! There was one thing about the whole package that was abundantly clear to me, though, even before I owned it - love it or hate it, Steel Battalion is a historic title in the gaming world. We've had special, purpose-built controllers for certain games before of course, but nothing on anywhere near this scale. As such, it's a release which commands respect, even awe, when you finally get to grips with it first-hand. It's such a unique experience that there's a kind of excitement, like a buzz, the first time you go through the start-up sequence and all the buttons on the controller start glowing.

It now commands quite a price on eBay and the like though, as you might expect; is it worth paying out for? In my opinion, yes it is. You may tire of the game's difficulty quickly but you can always sell it again for a similar price, and at the very least it's something that every gamer should at least experience once, as I'm very pleased to have now done. 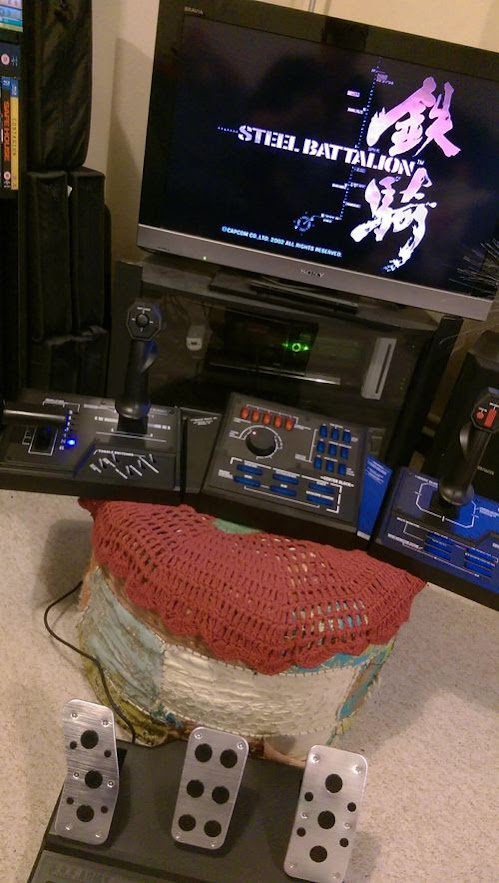