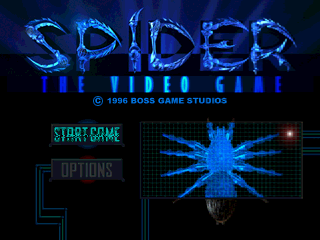 The arrival of the powerful 32-bit CD-based consoles brought many new and exciting things to gaming but one of the most obvious was 3D games. Although some had come before, notably on the PC, it was now much easier for developers to create complex game worlds in all three dimensions. A good number of these flashy new games came on Sony's PlayStation which was much better suited to the job than the Saturn (boo hoo!) but, whilst they almost always looked nice, not all of them were truly 3D. This was particularly true of platform games - many featured lovely polygonal worlds in which you often spent as much time moving into and out from the screen as you did moving left and right, but their stages were still linear, forcing you to follow a set path. This didn't necessarily make them bad of course; some were spiffing and one that I always found interesting was Spider.

It has a fairly imaginative story which is told through a pretty long movie intro as well as some between-stage sequences as well. Set in 2018, it concerns Dr. Michael Kelly, scientist and authority on nanotechnology, who's been busy creating a cybernetic spider. The company funding his work, the shady MicroTech, are eager to get their hands on the technology, most likely for rather nefarious purposes, and are spying on him to check his progress. During his research he discovers a way to transfer his own consciousness to the spider just as some MicroTech cronies arrive to take his research by force. In the ensuing struggle, Dr. Kelly's body is injured just as the connection is activated, effectively transferring him to the spider. The two MicroTech goons then take Doc's unconscious body away leaving his arachnid host to pursue them in the hope of retrieving it and uncovering their sinister plan.

Unfortunately, that's a long way for the small creature that he now is - six areas, in fact, that he'll need to crawl across. They are: Laboratory, Factory, City, Museum, Sewer, and the far-from-inconspicuously-named Evil Labs. Each of these areas is occupied by a variety of scary creepy-crawlies including wasps, slugs, flies, bats, grasshoppers, and rats, as well as plenty of fellow spiders of course! Most of these oafs follow set movement patterns and can therefore be avoided if you prefer, but some spit projectiles at you and your spidery form can only take two hits before losing a life so you'll need to use all of its range of moves. As you might expect, this includes the ability to walk on any surface at any angle, and he can also hang and drop down on a web strand. Touching non-solid stuff (mostly water and fire) will hurt him, but slightly less realistically he has an impressive jump and can fall a long way without taking any damage (unlike real spiders on both counts as far as I'm aware).

Even more unrealistic, although mighty welcome all the same, are the offensive abilities your arachnid host has to offer. He begins armed only with the tiny scalpel Dr. Kelly grafted to one of his front legs but many more weapons can be collected along the way. Some are used from the 'rear' such as smart bombs and mines, but most are for frontal assaults and include a flame-thrower, poison-spray, homing missiles, electro-beam, and boomerang. All but the last are in finite supply and all of them last only for the current stage or life, but they sure make the going easier, especially since you can have two front and two rear weapons deployed at once! Before you find any of these though, you'll notice little DNA strand things which are all over the place. Collecting a hundred of these gives you an extra life, although extra lives can be found occasionally by themselves as well, and most stages also contain 'pieces of CD' which will unlock a bonus stage (just an extra normal stage really) if you find all of them within a given area.

All this business with weapons and collecting the odd item here and there isn't especially original these days though. Where our Spider's adventure is a bit more unique is with the choice of main character and the abilities that come with it, and the 'enlarged' environments in which he finds himself, appropriately enough. Consequently you'll probably spend as much time crawling up walls or creeping along the underside of shelves or pipes or something as you will walking along platforms in the normal platformy way. There are around thirty stages including the bonus stages too, and they are pretty nicely varied despite being limited to only six areas which all feature various traps throughout such as puddles, vents, lots of flame spouts, and of course the inevitable chasms of doom. Some stages simply charge you with getting from one side of a room or area to the other, although the route is rarely is a straight line and can sometimes include alternate paths, but others are looped and allow you to move in either direction when you start, eventually ending up back where you started as though having walked all the way around a square(ish) room.

This actually explains the way some stages are presented too. When playing, you're either walking one way or another but your view of some stages often moves around corners creating the illusion that you're moving through a three-dimensional landscape. The graphics do a good job of maintaining this effect too - the backgrounds are flat and there are some fancy transparency effects on the flames and suchlike, but most of the foreground scenery and various creatures are made up of polygons, often viewed from an angle to further the 3D effect, and the result is... pretty sweet actually! The stages themselves are all quite realistic and feature the kind of things you'd expect to find in such a location such as sinks, flasks, and shelves in the Laboratory, boxes and conveyors in the Factory, streets, buildings and a park in the City, and dinosaur bones, a volcano, and a model city in the Museum which is my personal favourite area.

The textures are mostly decent enough and the sense of scale is superb but the best thing about the visuals, at least initially, is the creatures. Your own spider is nicely modelled and moves authentically but it's the creepy enemies that are more affecting. Imagine leaping across a gap onto a box or shelf or something similar, taking a quick look around before moving on, then noticing some long, spindly legs slowly appearing around the corner, for example. If you're not overly keen on creepy-crawlies it'll probably make you poop your pants! This scary atmosphere isn't really heightened by the soundtrack though. Some of the tracks are rock instrumentals and are pretty good in their own right but I'm not sure they really suit the game. Maybe a quieter, more atmospheric score would've been better. Oh well, some tunes are okay (or you could always turn the volume down in the options screen), and the sound effects are pretty good too.

Spider wasn't a very well known game in its day and is probably even less so now so I'm not sure what drew me to it. It doesn't even have a particularly enticing cover! It's basically a platform version of Micro Machines but its biggest appeal must simply be the opportunity to play a game as a spider. In this capacity it's definitely a success - exploring its miniaturised world is good fun (when it's not spooky) even if it is just as linear as a good old 8-bit platformer. It's a tough game too. You have to start the stage from scratch when you lose a life, which can be irritating if you keep getting stuck in the same spot, but there are continues, passwords, and save options so it's not too bad. Games like this may not have been what some people had in mind when the '3D Revolution' arrived, but Spider is a nice looking, original, and mighty enjoyable platform romp anyway. Besides, how many games offer you the chance to snoop around as a cybernetic, missile-firing tarantula?