Sega's oddly appealing SG-1000 has apparently harboured few hidden gems so far (that I've seen, at least) but I've missed it anyway so I figured it was time for another Round Up. The lucky dip on this occasion has yielded a nice mixture of genres including the only RPG released for the system! Take a look: 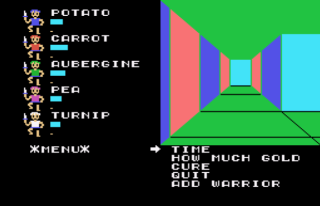 Yes that's right, this very game is supposedly (barring any doujin releases or something) the only RPG released on Sega's first console. That means there is a bit of Japanese text on the options screens but surprisingly the in-game menu is in English. Unfortunately that did little to improve my enjoyment of it. At the start you need to create a party of up to five adventurers before starting the game in a multi-storey labyrinth located beneath a town. However, I didn't get much further than this as sadly it's only marginally less confusing to play than the MSX's horrifying 3D Bomberman which it immediately reminded me of. Accordingly, it's incredibly easy to get lost and using a map to explore defeats the object really so I'm afraid I didn't stick with it for long. Black Onyx did appear on several other platforms and I can't comment on those versions, but this one was mighty unpleasant... 3/10 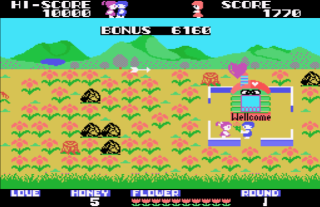 As any Sega fanboys reading may be aware, this game is most famous these days for being the début work of Sonic creator, Yuji Naka. Perhaps just as noteworthy as that though, is the fact that it was exclusive to the SG-1000 (and the SC-3000, its computery equivalent) which makes it even more unusual! The game itself is quite interesting too. It sees you in control of a young girl named Papri who's resolved to tempt her prospective boyfriend from a rival by bestowing lovely flowers upon him. To that end, she must collect ten blooms, but only fresh ones - they grow as you play and collecting wilted ones will cost you. There are various obstacles along the looping landscape such as rocks and tree stumps, and falling in ponds or contact with one of the bears will cost Papri a life. Girl's Garden is certainly no Sonic but it's an intriguing and addictive game with some nice graphics featuring a good number of colours (although the scrolling is very jerky) and superb music. Not bad at all... 7/10 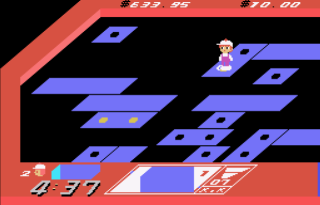 I had a feeling from its name that this one would be a puzzle game and I was correct! It's viewed from an angled-overhead perspective, almost isometric in fact, and stars some dude who's seemingly trapped amongst numerous floating tiles. The ones with holes move backwards and forwards allowing access to the whole puzzle but the object is to drill these moving pieces into place by performing a nice pirouette over each hole. They must, however, be fixed into place according to a small map of the pieces at the bottom of the screen which can make things quite a bit more complicated! The graphics are almost entirely comprised of the SG-1000's trademark blue and red and the music is merely reasonable and quite repetitive, but I still enjoyed this one a lot despite wondering what the hell I was supposed to be doing for the first few minutes. Once sussed out though, it's an addictive and enjoyable puzzler which I'll definitely be returning to... 8/10 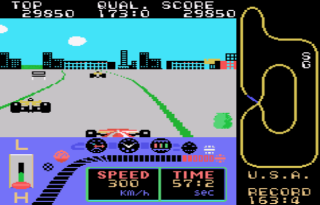 The prospect of an into-the-screen racing game on the SG-1000 was an intriguing one so I was quite looking forward to this one. First impressions weren't great, due mainly to the rather iffy graphics, but it's actually not too bad. The object is to complete two laps of the circuit within the qualifying time but the tracks are filled with lots of competing racers. Each one you pass gives you a bonus at the end of the race but they weave backwards and forwards trying to prevent you from passing. If you do manage to finish though, it's on to the next, usually more complex circuit. As mentioned, the graphics aren't great (although races do take place at different times of day), there's no in-game music, and it's easy to change gear by accident, but these are the only bad points about this game which is otherwise challenging and rather addictive, and there's even a track editor too! ... 7/10 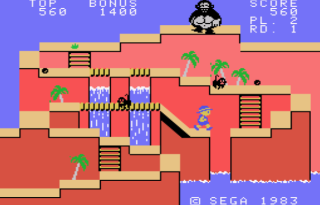 Hmmm, a bit of a confusing one this. Congo Bongo is basically a dodge 'em up and a clone of both Donkey Kong and Frogger, which is fine. It's also a port of Sega's own arcade game which presents the action from an isometric perspective. Here though, the perspective has been switched from isometric to side-on for the first stage and angled overhead for the second. The reason this confuses me is that even the VCS attempted a faithful conversion but Sega apparently couldn't manage it with their own machine! Not only that but the number of stages here has seemingly been halved as well - the first two are intact (albeit with the gameplay and graphical differences resulting from their change in perspective) but the third and fourth stages are missing as far as I can tell, and I looped the first two stages several times to be sure. Oh well, judging by the year of release it must've been among the first releases for the SG and it's still a fairly enjoyable little game (with the emphasis on the 'little' now!) but as a conversion it's shocking! ... 5/10


Red Parsley will be back with some more SG-1000 mini-reviews soon! :)
Posted by RetroKingSimon at 15:31