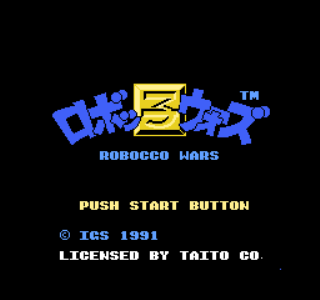 As any keen gamer from my era (and hemisphere) will tell you, the number of games officially available for whichever system we might call our favourite can be important but is usually only half the story. The number of quality titles available to import from other territories can usually boost the range significantly and can include all sorts of weird, great, and no so great titles. I was a fairly regular importer in the early 90's but one system I know very little about is the Famicom. Being as popular as it was, I have little doubt there are probably hundreds of games for it that never saw release in the West, and it was one of these that I discovered by accident when randomly selecting from the immense combined NES/Famicom release list for the latest post in this series of features. Since it is exclusively Japanese, the story or even basic premise behind the intriguingly-named Robocco Wars is not immediately forthcoming but it is a game that proved mighty appealing on first impressions.

Prior to loading the game, I had assumed from its name that Robocco Wars would be one of those mecha fighting games on which our Japanese friends are so keen but, while it is home to a good number of mechanised characters, this assumption soon proved to be incorrect. It actually initially appears to be a fairly standard platform game through which you control a curious-looking robot called R-10 via its human controller, Lance. This perky little robot, who looks like a cross between the tank thing from Blaster Master and a Cylon, can not only trundle about but also has an impressive jumping ability in addition to his expected shooty function. His job is to make his way through the stage, taking out any small enemy robots he might encounter. There are occasional mid-boss battles along the way as well as the usual stage guardian, but then something unexpected happened. The next stage took the form of a horizontal shooter with R-10 having transformed into a spaceship! After this stage there was another platformy one, but after that R-10 had transformed again, into a submarine this time, for an aquatic shooting stage! Maybe Robocco Wars isn't such a standard platformer after all.

There are ten stages altogether which alternate between the various styles. This ultimately leaves you with three spaceship stages, two submarine stages, and five normal platform stages. Obviously spaceships and subs can't jump though, so during those stages the relevant button will either drop a bomb or fire a missile directly upwards respectively. There's not really anything to collect through the stages with the various types of enemy robots and the odd trap here and there proving the only occupants. Touching one of them or their bullets costs R-10 a heart of which he has three to start with. Occasionally though, destroyed enemies will drop icons which can replenish lost hearts or give him a whole extra heart, and they can also offer a power-up for his gun, a speed-up, a temporary shield, or extra lives too. Thanks in part to these bits and pieces, Robocco Wars isn't an especially difficult game but much of the challenge it does offer comes from the design of the stages rather than the mechanical oafs that patrol them.

The first stage is a fairly simple one consisting of a mostly-flat landscape with a few gaps and jumps and the first spaceship stage is similarly uncomplicated, but after that things start to get a little more complex. The most common obstacles are usually things dropping on R-10's head as he rolls past them but there are also barriers he must blast through, moving/floating platforms (above chasms of doom, of course), narrow gaps and tunnels, long vertical drops, lifts, numerous walls to steer your various vehicles around, and even the odd multiple-route. The stages are all named too and, while I'm not sure they actually tell you too much about what's to come, they are quite intriguing names - Sweet Castle, Base No. 3310, Nemonemo Tree, Selena Island, Rainbow Sirup, Starlight Smile, Mysterious Dream, Silence Portrait, Invincible Fortress, and Square Magic. I'm not really sure you could say they're themed - certainly not in the traditional platformer/shmup sense anyway - but they're all split into several sections accessed through doorways and they're all very distinctive.

Besides the fact that it's a platformer (or so it appeared to begin with), one of the most appealing things about Robocco Wars to me was its graphics. Having been used to the lovely Master System for much of my earlier gaming years, I don't often find NES graphics that pleasant to be honest, but here they are quite lovely! Colours are bright and vibrant and the backgrounds are varied, often changing during a stage as well for each subsequent stage (some examples are only used for a couple of screens but are still great!), and some of them are mighty original too. Take the spooky black passageways surrounded by nice colours on the third stage (which is also a good example of the sometimes-unusual stage design), or the gorgeous space-city of the sixth stage, for instance. Most of the enemies are small robotic vehicles like fellow tanks, planes, and subs, while some stages also include scenery-mounted cannons, but there are a few squishier creatures too, mostly in the submarine stages, such as squid, fish, and coastal seed-spitters. Whatever form they take though, they're also varied in design and, despite being deadly to the touch, many are rather cute too! 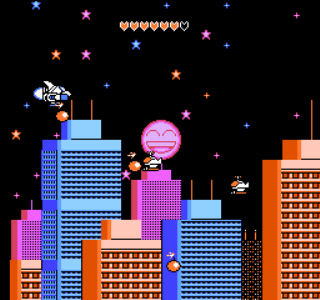 In addition to its ultra-fantastic visuals, Robocco Wars is a treat for the ears as well. Each stage has its own catchy tune, and sound effects, whilst minimal, are also nice. The only problem here really is the difficulty level which is perhaps a bit low. I had little trouble passing the game's half-way point on my very first attempt, for example! Still, at least that means you'll get to experience all the stages, and considering their quality that can only be a good thing surely? The audio/visual aspect of this game is what initially wowed me but it was quickly apparent that I'd also discovered a splendidly designed and varied little game that should be better known. Such discoveries are one of the main reasons I started Red Parsley to begin with so I strongly recommend all retro-gamers at least give it a try. Graphically this is definitely my favourite NES game so far and it's only a couple of tweaks away from being my favourite overall game for Nintendo's console too. The best 'random' game I've found so far!