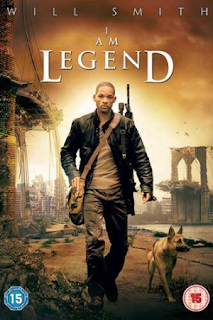 Tagline: "The last man on Earth is not alone"

Adapting a novel to film must be a damn tricky business at the best of times. This particular effort is actually the third attempt to place Richard Matheson's book on film following The Last Man On Earth (1964) and The Omega Man (1971), and the first to use the book's original name, but none of them have earned (or even asked for, in some cases) the endorsement of the author. Armed with a big budget and the very latest in ultra-fancy technology however, Lawrence's attempt to finally do justice to the celebrated book must surely be in with a good chance? I didn't actually get to find this out until just a few days ago when I finally got around to watching this well-liked film (see, it's not just games it takes me a while to get around to!). Despite its popularity, I've always been in two minds as to whether to watch it. Films set in post-apocalyptic worlds are always at least intriguing, but I couldn't really give two pieces of monkey crap about zombie films, which I've always been under the impression this is. 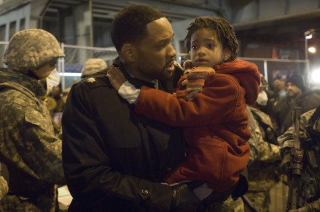 We open with Dr. Alice Krippin (Thompson) being interviewed on some news or chat show who is proudly revealing that she's developed a cure for cancer using a genetically-engineered variant of the measles virus. After this short segment we cut to New York three years later which has apparently long been deserted save for lone survivor LTC Robert Neville (Smith) who we later discover is (or was) a military virologist. He spends his days driving around the city looking for supplies and hunting deer, or in his basement laboratory trying to find a cure for a virus that mutated from Dr. Krippin's cancer cure and has apparently decimated Earth's population leaving him as, to the best of his knowledge, the only human survivor due to a natural immunity to the virus. However, as implied by the tagline, being the last human doesn't necessarily mean he's the last creature of any kind. After all, there must be a reason he doesn't go out at night, instead boarding up his house with metal shutters. 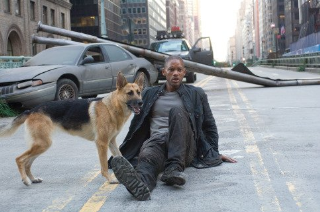 Indeed, as we later discover, not all the victims of the virus were killed outright - only about 90% had that 'luxury'. The rest, with the apparent exception of Robert only, were mutated into 'Darkseekers' - unpleasant, not to mention aggressive creatures whose abilities/demeanour falls somewhere between that of vampires and zombies. Director Lawrence has opted for CG to portray these clots resulting in creatures with some impressive abilities. The lead Darkseeker (Mihok), however, spends much of his time bellowing like Gollum's older brother - perhaps because, sadly, the visual effects aren't that great. That's the only blemish on an otherwise stunning-looking film though. Whilst the story may not necessarily stick to the plot of book too stringently, the post-apocalyptic world (okay, New York) is fantastically realised. 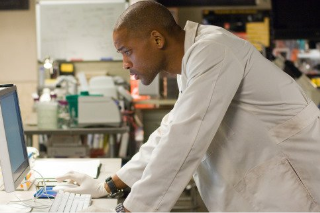 Thanks partly to this, the first two thirds or so of the films are completely compulsive viewing. The streets, strewn with long-abandoned vehicles and odd pieces of debris, are visited by occasional wild animals but are otherwise overgrown with weeds and eerily silent. This all creates a superb atmosphere but even more impressive is Will Smith's performance. I suppose it was a mighty helpful coincidence that the only survivor was military trained and a virologist too, as opposed to a lazy, obese, benefits scrounger, but even so he is a revelation here. At the beginning he talks only to his faithful hound, Sam, and mannequins he's arranged as 'customers' in stores he visits for supplies, but the constant loneliness would affect anyone eventually and the gradual decline of his mental state is brilliantly, and at times heart-wrenchingly portrayed by Smith. This if nothing else makes the film very watchable but, although the dodgy CG and a weaker final act do let the side down a little, I Am Legend is still sufficiently intriguing and well enough executed to be a mighty entertaining hour and a half.