Despite being hailed by its fans as the most underrated hand held ever, Atari's poor old Lynx was pretty much a flop from start to finish. It was a mighty powerful machine for its time, perhaps too powerful, as it sadly crippled the machine with a bulky size and woeful battery life. Due to this, few developers other than Epyx (the original designers of the machine) and Atari themselves actually released games for it, and what this means is that a large percentage of its back-catalogue is made up of arcade conversions. Thanks to that aforementioned power it managed most of them admirably though, and here are the very best ones: 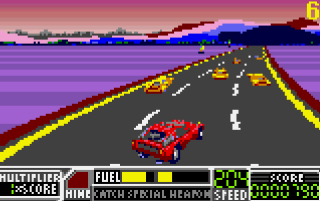 To be honest, I've never been hugely keen on this game. The version I've played the most is the monochrome version on the Speccy which is decent but too easy, but fan or not, this Lynx version is a pretty impressive effort. Like the arcade version and unlike the Speccy one, it's not particularly easy, partly because the car controls in the same slightly annoying way and I consequently didn't make it very far (and had little desire to try due to the aforementioned mild dislikeness I still harbour). The gameplay has been well duplicated though, and the graphics are superb - very colourful and fairly fast, although the scaling looks a but iffy on the Lynx's screen. So, great job on the conversion, less so on the game itself... 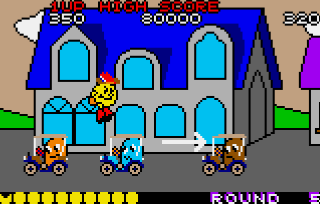 Until recently I had only played this Pac-Man spin-off on my trusty Speccy and PC Engine, as well as in the arcades in the late 80's, and it's always proven to be a tricky but mighty enjoyable and addictive game. Happily, this Lynx version is no different! Technically, it's not a terribly hard game to convert featuring basic colouring, uncomplicated backdrops, and short, catchy tunes, but that's not the point - it's still a good conversion and it's still simply really nice to play. If Atari's 'handheld' was truly a portable machine, this would be an ideal type of game to play on the train or something. I wish I'd gotten around to buying it for my own Lynx! 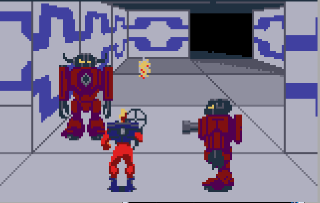 This is one I had never played outside of the arcades until very recently, mainly because I was less than confident that its unique control method could be duplicated well enough. After some time playing it, however, I was pleasantly surprised. Moving 'Major Rock Hardy' (snigger) around the 3D mazes is a little fiddly to start with but quickly becomes second nature, and that makes Xybots a more than capable conversion of a pretty sweet game! Of course, like many of Atari's arcade games, this was intended as a two-player game, and that's something that wasn't forgotten during the conversion process either - it takes a fellow Lynx/Xybots owner to do it, but it's worth the effort. Probably the best conversion Xybots received. 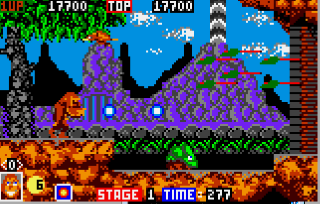 As with the other games on this list, playing the Lynx version of Toki necessitated a (supposedly quick) refresher of the arcade version in order to make a well-informed comparison, and I ended up enjoying it so much I wrote a whole review of it! It also provided me with more than enough info to realise that this Lynx offering is very splendid. The Amiga and Atari ST versions are probably the closest to the arcade game visually – things are a bit blockier here, understandably – but this version features nice use of colour, decent audio, spot on stages, and has a 'feel' very close to the original. Toki's jump is a bit floaty but that's my only complaint. Not everyone likes Toki but if you do this is a stonking conversion. 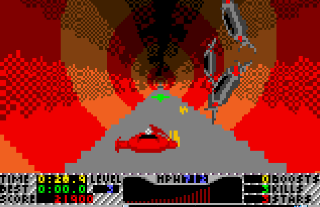 There was a period when I used to spend nearly every Sunday in the arcades of a nearby beach resort (as detailed here), and during this time STUN Runner was one of my favourite arcade games. It featured a rather uncomfortable plastic seat you had to straddle but the control yoke was similar to the one from the Star Wars machine and therefore awesome, which not only allowed you to guide your red 'speed bike' down twisty, loopy tunnels at almost 1000mph, but you could also shoot stuff up with its trigger buttons too! Due to these insane speeds and the game's fancy polygon graphics, decent conversions were few and far between... until the Lynx version showed up. It may not look very nice in this, or indeed any screen shots, but it works a lot better than any other conversions of the famous tunnel racer that I've played and is consequently an amazing achievement.
Posted by RetroKingSimon at 14:06