For any keen gamer, the prospect of acquiring a new console can often be an exciting one. From the first announcement of the new system to leaked photos of games in action on it to finalised prices and launch line-ups and then finally the chance to actually own it, finances permitting of course. This cycle was particularly memorable for me with regards to several consoles which remain among my favourites, but none more so than NEC's mighty PC Engine.

I can't speak for other countries but here in the UK we had some fantastic gaming magazines in the 80's and 90's. One of them - Computer & Video Games (more usually referred to as C&VG) - covered computers such as the Spectrum, C64, Amiga, etc in its front half but had a dedicated console section in the second half know as Mean Machines which would eventually evolve into a separate magazine in its own right, but at this stage it was about as comprehensive as console coverage got for us. The most tantalising system they featured was the PC Engine which was quite mysterious but immensely desirable. It was released in Japan in 1987 and glimpses started appearing in C&VG soon afterwards along with the odd screenshot of early games like Alien Crush, Victory Run, and a stunning-looking port of the amazing R-Type. Every gamer who wasn't stupid immediately wanted one but, due to the lack of a European release, that wasn't an easy proposition.

Lots of companies started appearing in the back of C&VG specifically to help us do this - one example I remember was called PC Engine Supplies and they had all the latest games and accessories, but they weren't cheap and I was still at school then so persuading my parents to stump up for a possibly-ropey 'grey import' was an unrealistic challenge! Fortunately, over the couple of years I had spent compiling an ever-increasing PCE wish-list, I had left school and had a bit of money available - something which helpfully coincided with the opening of a new games shop in my home-town called South Coast Consoles (read a little more about the store here if you so desire). It was during one of my frequent visits that I observed a second-hand white PC Engine, for a remarkable £40 if I remember correctly. This would've been a bargain for any console but an Engine? I snapped it up right away and the owner of the store, helpful fellow that he was, told me about how it had been modified to work in the UK. He suggested I take it home that night to test it out - if all was okay, I'd buy a few days later. The only bad thing about this particular Engine was that, while boxed, it didn't have its power lead. Luckily my Master System lead fitted it perfectly, and it wasn't too much hassle to tune my TV in either. Successful test conducted, I returned excitedly to the store the next day and bought it.

I could only afford to take a single game with my shiny new machine at the time of purchase but I still had my list, and I was immensely satisfied to be able to tick some of the titles off over the next few years, albeit rather slowly! For the first time since the early 90's, however, I've returned to the first few titles I experienced for NEC's magnificent little white box to relive some great gaming memories... 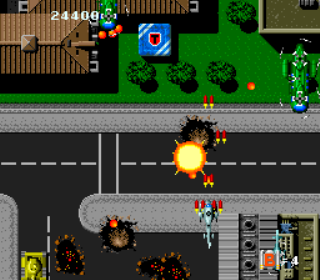 I've never actually owned this game for the Engine but it is the game I was given by my helpful friend at South Coast Consoles to test out my prospective new purchase. The colours certainly weren't as bold as they are in this screenshot - many PCE's weren't converted to work on PAL TV's very skilfully and had faded colours, or even none at all - but it was a stonking blaster which rivalled many that I already had for my MegaDrive. The graphics were superb - close to arcade perfect in fact (and nicer than the MD's own version in my opinion) - and still look nice today, and the audio also provided a worthy introduction to Hudson's versatile CPU (which produced the sounds instead of a dedicated sound chip). Of course, such was the abundance of shmups on the Engine, Twin Cobra was soon outflanked, but it was and remains an enjoyable game and a great conversion. 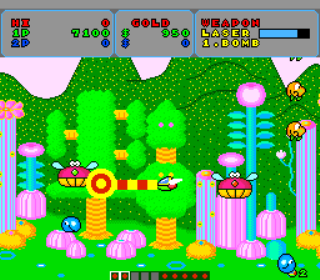 My appreciation for Sega’s day-glo series is well known here and I had already played all three FZ games on my Master System by the time I bought my Engine but, such is their splendour, this was still an obvious purchase for my new console! It was in fact the only game I took home with it and I enjoyed reacquainting myself with Opa-Opa and his plight. It was still a very tough plight too, one which I've never completed without resorting to cheating (snigger), but it ended up being the version of FZ I played the most. This was partly because the graphics and music are understandably superior to the MS version, particularly the former which included much more vibrant colours and backgrounds crammed with far more detail, and there's a handy radar thingy at the bottom too! In fact, it may possibly be the most garish version of any Fantasy Zone game to date but that doesn't stop it from being one of the rulingest as well. Destroy Menons forever! 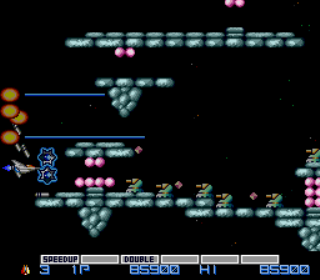 This classic has long been one of my very favourite horizontal-scrollers and the first version I ever played properly was this version which was donated to me by a friend who had acquired a copy but had no console on which to play it. Poor him but lucky me! Happily, not only did I swiftly discover that Gradius is frickin' awesome but, as I wasn't aware at the time, this is also arguably the best of the many conversions the arcade original received. It does summer from some rather jarring slow-down when things get busy (try braving a crowded section whilst armed with four Options and lasers!) but that's the only negative thing I can say about it. The graphics were spot-on, the music had undergone a favourable remix, and there was even an entire extra level for blast through! Unquestionably my favourite version of an all-time great (yes, including the arcade version). It may not have escaped your notice that this is the only game featured here which isn't a shoot 'em up, and it's also the only one that's not an arcade conversion as well! I guess that says something about not only my taste in games, but also the sort of games the Engine was home to. This was also one of the first PCE games released by Hudson and was always referred to as simply 'Chan and Chan' by C&VG, although it's full title is actually Kato-chan and Ken-chan and is based on a TV show featuring the two comedians of the title, either of whom you can select and guide through their hazard-filled platformy world. It's a very Japanese game with lots of weird goings-on and it's full of toilet-humour. Our heroes can fart on enemies to kill them, for example, some enemies poop on you to attack, and there are even some backgrounds characters taking a dump! A unique game to say the least, but a funny one which has some catchy music and addictive stages as well. 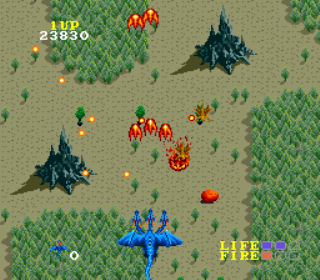 One reason I didn’t have a large number of Engine games in the early days is the complete absence of anything like eBay. This meant buying games for fixed prices from importers, of which there was many. One which carried a great range was Telegames but their prices were a little... inflated, shall we say. I used to like Dragon Spirit a lot on my Speccy so I decided I wanted the Engine version at any cost. That cost, thanks to Telegames, ended up being £60 which was not a small sum to me in those days (or now either, I suppose). In retrospect, if I was going to spend that much on a PCE shump, it really should've been Gunhed or something, but Namco's game was still a pretty good one, if rather tough. It's a great conversion too, and I played it a lot. Sixty pounds though... I think that's still the most I've ever paid for a game that wasn't some super collectors item or something. It was a hard life being a retro gamer in the 90's!


The PC Engine was a hugely desirable console when it was launched but the reality was a little different. Owning it was great and made me feel like a genuine 'hardcore gamer' but it wasn't easy to build my library of games. It was actually to me what being a Neo Geo collector is like today - some of the earliest/most popular games are easy and cheap to get hold of but most of the titles worth having were either uncommon, expensive, or both. It's no longer the case with the Engine of course - it's a reasonably affordable machine to collect for these days but back then I had little choice but to stick to the five games listed above.

I did manage to add a few titles such as Dungeon Explorer (a game C&VG raved about and called a superb Gauntlet clone, although it actually turned out to be an action RPG with tonnes of Japanese text - thanks for that, C&VG!) and my good friend Luke donated a handful of loose HuCards as well, including the spiffing Galaga '88, and my Engine gaming days were happy ones. How could they not be? It was a technical marvel really - one of the first pictures of it we saw in the UK was in C&VG which showed it next to a packet of Skips crisps which made it very small (less than a foot square in fact) but it sure packed a whallop! Many games on it matched their MegaDrive counterparts despite Sega's machine packing a 16-bit CPU next to the Engine's 8-bit one, and it also had the benefit of some of Japan's finest developers working on it, sometimes exclusively (such as its designer, Hudson Soft).

I don't really know how the Engine was viewed in other countries but I'm confident that if you speak to any gamers who grew up around the time I did here in the UK, no console would've captured their imagination quite like the PC Engine.
Posted by RetroKingSimon at 13:08