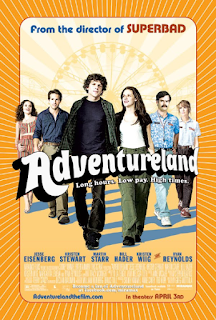 Tagline: "Nothing brings people together like a crappy summer job"

Teen comedies have always been a bit of a mixed bag for me. Some of them are fantastic but many more are boring, stupid, or just plain awful. One example of the former is Superbad, a film I found immensely witty but also highly rewatchable as well, so when I first heard of Adventureland I was mighty pleased. It is after all from the same director, as its cover states proudly, so I was pretty much expecting more of the same juvenile, booze-fuelled tomfoolery. However, while Mottola's earlier film places the two 'heroes' in their final few weeks of high school, Adventureland is set shortly after its end when James (Eisenberg) is about to depart for a road-trip around Europe with his best friend. After spending the opening scene getting dumped by his girlfriend though (for the second film of his in a row that I've seen!), Jesse soon receives some more bad news when he discovers that not only can his parents no longer afford to fund his trip around Europe but they can't even put anything towards his upcoming stint at Columbia University either. That leaves him stuck in Pittsburgh circa 1987, and that can only mean one thing... 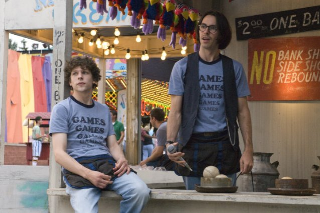 That's right, a summer job, and after several fruitless attempts at finding work, he's left with the demoralising prospect of a mundane position at the local amusement park of the title where his immature childhood friend Frigo (Bush) works. After a short meeting with eccentric park manager, Bobby (Hader), he find himself hired and working in the 'games' area as opposed to the (slightly) more prestigious 'rides' area. Working nearby is the sarcastic but equally intelligent Joel (Starr) and other park workers include the alluring Lisa P (Levieva), Bobby's wife Paulette (Wiig), park technician Connell (Reynolds), and of course the lovely but troubled Emily (Stewart) who introduces herself to both James and us by saving him from stabbing at the hands of a disgruntled customer who wants a 'giant ass panda' prize he didn't earn! 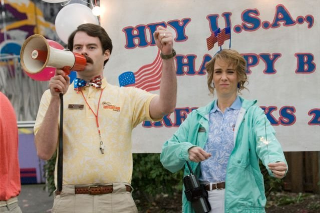 Before watching this film, my only previous sight of Jesse Eisenberg was as a genius uber-geek in the superb The Social Network, so I didn't really think he would be a good fit for 100-odd minutes of Superbad style mayhem, but it was quickly apparent that, aside from having the same director, the films weren't very similar at all. I later found out that Adventureland is actually based on Greg Mottola's own experiences and Eisenberg, despite initially reminding me of the aforementioned role, quickly suits this uptight, literature-loving character as well, who is clearly too smart to be stuck with such a degrading job. This is also only the second film I've seen of Stewart's as well (the other being The Runaways and definitely not any Twilight films - arrghhh!) and it's more immediately obvious that she's a perfect fit for the sullen 'Em' who comes from a rich family and only works at the park to escape her unpleasant home life. 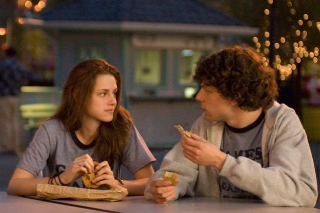 It is of course she and James who are the main focus of the film with Joel and Lisa P taking on 'best friend' and 'seductive distraction' duties respectively, and the combined charm and chemistry of all of them elevates Adventureland above the... well, mediocrity it could've otherwise been. It's not the out-and-out comedy that Superbad was but the script is equally intelligent and the performances perhaps even better, with most dialogue much quieter and with less fuss but still affecting all the same, and it does still have its fair share of boozy action (including a concerning amount of drink-driving!). The 80's setting also injects a good dose of nostalgia, not least of which is the superb soundtrack featuring the likes of David Bowie, INXS, The Cure, and Lou Reed. The end result is a more mature but no less enjoyable coming of age comedy/drama. I've already seen it twice and I'd be happy to sit through it again!