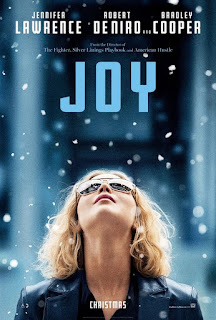 Despite her undeniable talents, I think it's fair to say that at least some movie-goers are beginning to tire of Jennifer Lawrence. I don't think even her harshest critics could try to claim she's not a good actress, nor that she's appeared in some great films, but she has been in quite a few high-profile releases of late, and some would argue that the films in question would not be quite so high-profile were it not for Ms. Lawrence's presence in them. A great example of this is Joy, released this past Christmas season, which is a biopic of an American entrepreneur called, perhaps unsurprisingly, Joy. Or Joy Mangano to use her full name who, having grown up in New York an inventive child, had underachieved quite considerably by the late 80's and was dissatisfied with her life. Although a smart, creative, and resourceful woman and spurred on by a supportive grandmother, she had become stuck in a dead-end job as an airline booking clerk and bogged down by various familial responsibilities. 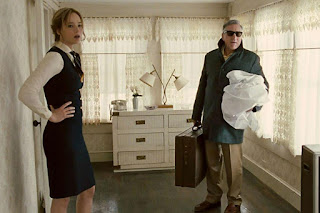 Not only is she recently divorced, leaving her with two kids to take care of, but her ex-husband Tony (Ramirez) is still living with them, as does her depressed mother Terri (Madsen) who spends her days in bed watching soap operas, and now her father Rudy (De Niro) has turned up with his bags too, and all of them expect Joy to take care of them. It's a situation that would give most a nervous breakdown, but somehow Joy soldiers on, at least partly thanks to the continuing encouragement of Mimi (Ladd), her grandmother who also lives with her, obviously! After a spilt glass of wine and resultant accident inspire one of Joy's brainwaves, however, she's soon hawking her design for a self-wringing mop. Complete with removable (and washable) head, no less! 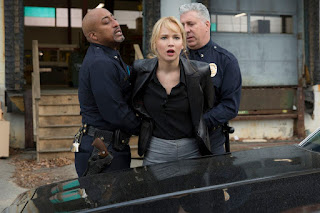 It takes more than a good idea and hastily-constructed prototype to turn the tide though - we may all be millionaires otherwise - but Joy is determined. First she needs to secure funding, then deal with potential patent and manufacturing issues, and then... find somewhere or someone to sell the goddamn things! Perhaps a new shopping TV channel called QVC could help? That's if Joy can blag a meeting with channel executive, Neil Walker (Cooper), who seems to have taken a shine to her. Plus, she's still got her continuing (even escalating) home and family problems to deal with, in particular her father, his new girlfriend Trudy (Rossellini), and her bitchy, interfering, overachieving sister Peggy (Elisabeth Röhm) who continually puts her down and humiliates her. 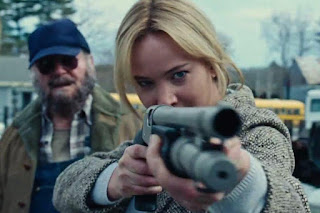 It would be a tall order to emerge from such chaos with one's sanity, never mind any kind of success. Even if you didn't already know of Joy's story though, I guess it's not hard to work out whether she was successful or not. For us it's more a case of whether it makes for an entertaining film, and on that point I'm less sure. It's a good cast and screenplay and, aside from one or two of De Niro's scenes, it's a film that belongs to Ms. Lawrence. As is often the case lately. That's not generally a bad thing but, while her work here is good, it's not that amazing, and neither is the film to be honest. Both have been talked up as award contenders - I guess you would expect that with an 'inspirational' tale such as this one - but it's just not all that interesting. 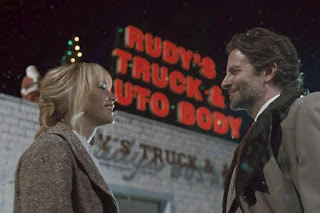 Don't get me wrong, it's great that Joy's hard work and tenacity paid off, of course - that kind of thing is always nice to see - but most of the drama comes from her irritating family (especially her sister). The rest of it takes a good while to get going, and even then just kind of chugs along until it's over. I think it's a story worth telling but one that perhaps is not quite worthy of the hype and expectation that comes from casting Lawrence at the moment. I'm confident that if it starred a less high-profile actress, it would've been warmly received and achieved moderate success, but it's just become a much bigger deal simply because Lawrence is in it. She is appealing in it though, De Niro has some great lines, and it has a good ending too. It's not a bad film overall, and is probably worth a watch. Just keep your expectations to a minimum.