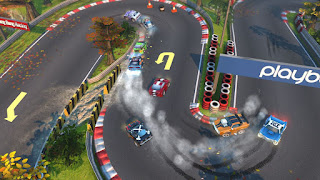 I'm not really sure why I'm so keen on top-down racers as I'm not too good at them, but new ones still always catch my eye all the same. Just like this one of course, which despite being released a few years ago now, is at least new to me. It features those stupid melted cars with giant wheels - some twenty of them, no less, spread over four classes, and which can be raced over fifty-four track variants. Most of them are very tight and compact and will have your chosen car sliding around their many, many hairpins and chicanes more or less permanently, and most likely regularly slamming into the barriers and other racers as well. I guess that's the point with games like this - fun, not realism! 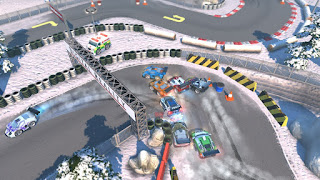 And first impressions are that it is indeed fun. Lots of it. There are three single-player modes as well as four-player split-screen action and all of them are pretty riotous to play. As well as tons of sharp corners, there are hazards (such as oil spills), many short-cuts, and different surfaces that encroach on the circuit (like snow or sand), but the racers tend to stay pretty bunched up anyway. The audio/visuals are really nice too, very detailed and lively on both counts. The only things I didn't like really were that there are only nine unique courses (the rest are mirrored versions, etc) and there's perhaps an over-reliance on nitros. Otherwise, it seems like a pretty darn entertaining game.