Well, okay, it's not quite as 'long lost' as the last game to bear that description here at Red Parsley but this Sega arcade game is incredibly rare and completely unknown to most gamers, even die-hard Sega fan-boys. This is quite odd considering it features their most famous and popular character, and even more odd since its 1991 release makes it one of the first games to feature the spiky blue wonder.

It's called 'Waku Waku Sonic Patrol Car' and, despite including both Japanese and English-language versions, was released only in Japan, and even then only in the form of one of those wibbly kiddy rides, but this time with a basic game tacked on. Perhaps unsurprisingly, the ride itself takes the form of a mini-police car and the game sees Sonic in the role of its driver, going about a routine patrol.

The first part of the game involves driving up a stretch of road while hitting as few cars as possible and avoiding fluffy animals at a pedestrian crossing. Before long, Dr. Eggman shows up and starts driving predictably-irresponsibly, throwing bombs at Sonic as he pursues him. The object is to use Sonic's spin-attack to stop Eggman, then return to the station to earn your rightful commendation (you get ranked in stars, from one to five) and rest easy knowing the streets are safe once again. 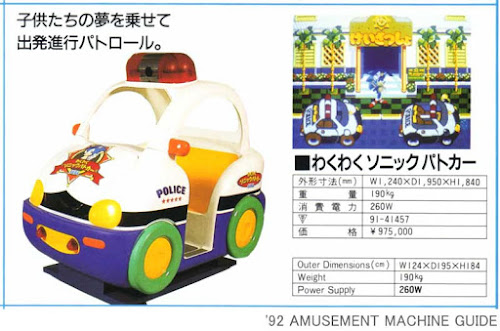 There's not a great deal to it then, which isn't a shock considering what it actually is, but I imagine it proved sufficiently entertaining for any kiddies who were lucky enough to encounter a machine in their day (although they weren't even common back then). I'm sure it suddenly became a lot more popular once Sonic's popularity shot through the roof too, which would've been happening around that very time, or at least very soon afterwards.

As for us crinkly gamers... It's most likely a game that none of us will get to play in its original form any time soon - perhaps it's not a game many of us would want to play any time soon - but, amusingly, the board should be now have been 'dumped' and incorporated into the latest version or MAME, so any die-hard Sega/Sonic fans can still get a taste of Sonic's foray into law enforcement! Whether you're interested in it or not, though, it's a interesting curio to be sure, and a unique entry in Sonic's now-extensive back-catalogue.