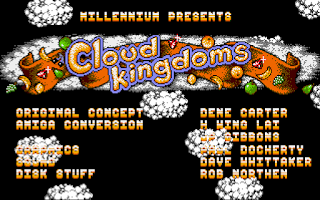 Having somehow never previously heard of Cloud Kingdoms, it was some appealing box-art that first drew me to it. It features a rather odd but amusing green creature, largely spherical but for a sizable conk, holding a bottle or lemonade whilst surrounded by several similar but more hostile-looking creatures of differing colours, as well as a terrifying spider and bemused snail. As appealing as I found its cover, however, it didn't actually tell me much about the game itself. I resolved to find out and soon discovered that it's a floaty maze game set high above ground amongst the titular kingdoms which are both many and highly varied, and it's a game whose altitude plays a key part in proceedings too. More on that later though. 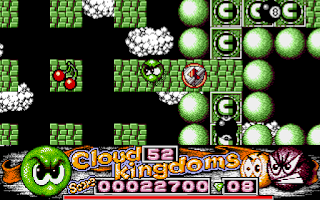 First I shall reveal the name of our brave green hero: Terry. Someone who apparently doesn't like Terry very much is the 'really very nasty' Baron von Bonsai who has stolen Terry's magic crystals, taking them to the Cloud Kingdoms where he intends to 'use their magic powers to enslave the Cloud Fairies'. Well, that's not great news, but Terry of course aims to swiftly retrieve his crystals. The Baron has expected that, of course, and has placed a load of traps and evil creatures throughout the kingdoms of which there are thirty-two in total. At the start you get to choose between four of them - Cloud Kingdom, Arrow Kingdom, Unseen Kingdom, and Quartet Kingdom - with each consisting of a single world. Once you've collected all the crystals therein, you'll be returned to the select screen to choose another. 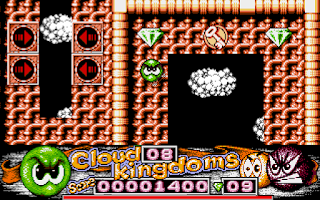 As you might've guessed from the names, each world is themed too. They are viewed from directly overhead and each is roughly three or four screens wide/tall. Their surfaces are tiled and Terry can be moved around them pretty quickly. This is just as well since they are also timed and he has only one life. Well, kind of - he can lose lives, but loses ten seconds from the timer each time and has to start the stage again too. Eeek! Unfortunately, this kind of thing will happen often to start with. As mentioned, there are a number of traps and hazards and also a reasonable quota of enemies, and Terry's only means of defence is his ability to jump. While this may help him evade the enemies, it doesn't help with falling off the edge. 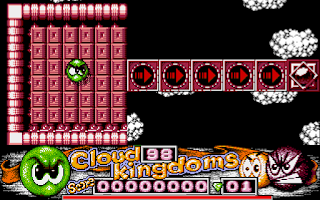 This is overwhelming what will cost you too. Most edges of the tiled worlds are not barriered, you see, so straying too close will see Terry plummet to his doom. Some traps also include tiles that disappear as you pass over them, and there are some special tiles such as those featuring arrows which push you in the direction indicated, or slidy ice tiles, and all of this will have the same effect. Mercifully, the many indestructible enemies don't actually shoot at you or anything, and they do at least follow fairly predictable patterns, but they're quick and contact with them will deplete Terry's energy very quickly. So quickly, in fact, that you'll often not emerge from a solitary encounter with a single one of the ghastly miscreants. 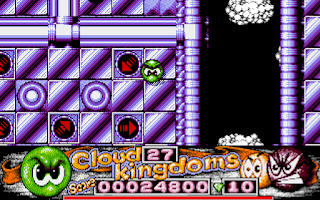 There are not many different kinds of them (8-balls, ladybirds, green spider things) but the variety in the stages is pretty good. There are many pattern/colour themes as well as gameplay themes and some of them look quite nice. How many of them you're likely to see is more debatable, however, for Cloud Kingdoms is somewhat demanding for normal human players like me. Even the easiest stages need to be learnt thoroughly before they can realistically be completed. Some require a bit of back-tracking as you often need to find keys to open up other rooms/areas and while you're pootling around you'll encounter many sneaky traps and/or obstacles that will catch you out time and time again, and many cheap deaths (such as the disappearing floor tiles) will be suffered in the process. 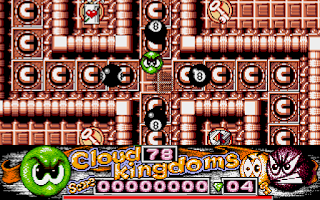 One of the more annoying features is the magnetic tile. These prevent Terry from jumping (is he made of metal?), and there are also those pesky arrows, pinball bumpers, and various other things, but the worst thing of all is simply the barrier-less edges. There are collectibles to help you along such as fizzy pop which refills your energy, wings which allow you to take flight very briefly, clocks for more time, fruits and other stuff (like flowers) for bonus points, a temporary shield, a bottle o' beer which makes the controls all wobbly and sluggish for a bit (I guess that one isn't helpful), and even a paint can that lets you build (or 'paint') new tiles/passages for a brief period. You can at least reset a stage too (for a time penalty, of course). 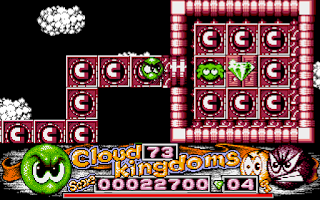 Even with all this stuff though, and even once you know where you can and can't go, what to avoid, etc, it can still take a while to finish some stages as the crystals are obviously sprinkled all over the place. The difficulty varies a lot too. You might get stuck on one stage for many hundreds of hours (*coughArrowKingdomcough*) and then blitz the next in 30 seconds, and it's this inconsistency that I most disliked about Cloud Kingdoms. The audio is weak (there is the odd jingle but no in-game music) but the graphics appeal to me, perhaps because they're somewhat reminiscent of a monochrome Speccy game (chortle!), and I've enjoyed it a lot when it's not been almost impossible, but it does frequently seem to be exactly that. Well, almost. It's a real shame too, I think I'd have liked this a lot otherwise.