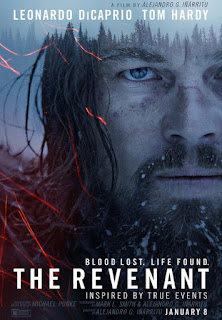 It's hardly a secret among film fans that Leonardo DiCaprio has for so long been overlooked by The Academy for the Oscar that so many believe he's deserved on more than one occasion. Maybe the crinklies just don't like him? Such has been the force of their snubbing in the view of many, that must surely be the answer! Maybe it's just been bad luck, but whatever the reason, critics and fans alike are now united in their belief that this will surely be Leo's year, for The Revenant has been hailed by all as a surefire winner for him. Whether he chose it for that reason or not, who can say? Probably not, but it definitely has all the ingredients necessary: it's a true story (allegedly) of a man overcoming a desperate situation, journeying far through treacherous conditions, in an attempt to return home against overwhelming odds. What could be more inspiring (and Academy-friendly) than that?

The true story in question is that of Hugh Glass, a frontiersman and fur trapper who, in 1823, is acting as tracker for a party of trappers who are hunting for pelts in the unsettled wilderness of Montana and South Dakota. Before they can set off home, however, they are attacked by Arikara Natives and lose over half of their number. At risk of further attack, they stow their pelts, abandon their boat, and continue the journey on foot. Before long, however, Glass (DiCaprio) is attacked by a grizzly bear while scouting the area and badly mauled. Despite his injuries, he manages to kill the bear, and his party, which includes his son Hawk (Goodluck), find him near death. After carrying him for a while, they eventually decide to abandon him to his inevitable fate, spurred on by John Fitzgerald (Hardy), a selfish trapper who doesn't trust Glass.

I suppose in a way their decision is understandable. It's the middle of a freezing winter, there are hostile natives all around, and he did sustain horrific injuries. Struggling hundreds of miles with him in tow would probably get them all killed. From a cold, logical point of view it makes sense, but who could really do it? Who could actually leave a man to die a cold, painful, lonely death? It's definitely something you will think about while watching this, but whichever stance you take, abandoned he was. But Glass wasn't ready to die. Not like that at least, so he sets about making his own way back to the trappers base at Fort Kiowa. Slowly. Painfully. But moving. Along the way he encounters the odd person here and there - a kind native soul (RedCloud) who helps him through a storm, and some rather less kind French hunters among them - but for a majority of his journey he's forced to struggle on alone.

Unsurprisingly, therefore, our man Leo spends a significant portion of the film's sizeable running time in centre-frame. Much less surprising is that he is indeed quite stunning. Also earning plaudits is the usually excellent Tom Hardy whose gruff, treacherous Fitzgerald makes for a suitably heinous bad guy. Gleeson and Poulter are both good too, as the captain of the party and a young volunteer respectively, but it's DiCaprio's show without any question. His preparation for the role was extensive and to say it has paid off is more than an understatement. Pretty much everything he goes through in the film he did for real (except the bear attack, obviously) and is a testament to his amazing commitment as an actor, especially since he doesn't actually have much dialogue so near enough everything has to be conveyed physically.

There are two more stars who are just as deserving of praise though. Namely, Iñárritu for his wonderful direction and Emmanuel Lubezki for his stunning cinematography which captures the incredible landscape of the various locations just as well as it does Hugh Glass' horrific ordeal. Some scenes are so harsh that it would all be rather hard to believe if it wasn't a true story. The fact that it is (or most of it, at least) only makes it all the more compelling. It's long, it's intense, some scenes are quite harrowing, but it's amazing to look at and anchored by a truly great performance from DiCaprio. Does he deserve the Oscar so many feel he's been due for so long? Well, I haven't seen all the other nominated performances yet but I'd be astonished if there are any better than this, and the film is one you'll remember for long after you leave the theatre.