Anyone who considered themselves a gamer in the late 80's and 90's had heard of John Carmack. He, along with Jon Romero, was head programmer at id Software who became rather famous for their first-person shooters (just a couple of little games called Doom and Quake). Like all coders, however, he had to start somewhere. I've already taken a look at one of Mr. Romero's first games so now it's his fellow founder's turn, and while these aren't the very first games ever to be completed by Mr. Carmack, they were released in his early years as a coder and would go on to have much significance, for id Software and gaming generally. 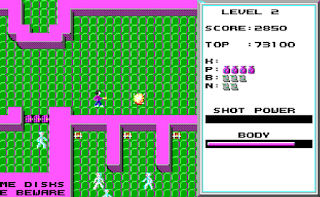 First developed for the Apple II at the end of the 80's, the first game in the Catacomb series is a simple maze shooter. You're a magician called Petton Everhail who has been asked to rescue the Kieralon Empire by freeing their catacombs of the terrifying monsters that now dwell therein. There are ten mazey stages populated by numerous enemies. Petton can run at quite a pace and shoot fireballs without limit (including more powerful charge shots), but the enemies can run just as quickly so fast reactions are needed, especially since his energy meter is depleted rapidly and he only has one life. It's a short game, though pretty tough due to the fast and numerous enemies, but it shouldn't take long to get through it. It was still a pretty cool little game in its day, but early DOS games were never really the pinnacle of gaming and it hasn't aged well. It's certainly worth a quick play for its historical significance, specially for id Software fans, but nothing more than that... 4/10 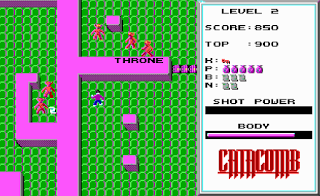 Catacomb must have been at least fairly popular though, since this sequel appeared less than a year later. The swiftness of its arrival isn't too surprising once you play it as it's more of an update than an proper sequel. Exactly the same graphics are used (which are somewhat eye-watering in either CGA or EGA mode) and the audio is again pretty much non-existent. There are, however, some thirty new stages. They, too, are exactly the same style as before, just different layouts and a couple of new enemies. The increased number does give the game much more longevity though, and more strategic use of the keys and power-ups (potions, to recover some health; bolt spells, to take down multiple enemies; nuke spells, for a powerful swirly shot) is still required accordingly. It's pretty good fun to play in short bursts now and then too, mainly for high scores as each level has treasures as well as numerous secret areas. Still basic and repetitive but better... 6/10

Look out for the second part of this feature where I'll take a look at the remaining Catacomb games which made the bold (in those days) switch to 3D. Coming soon!

Gameplay Video: Here's a look at the first few minutes of Catacomb :|