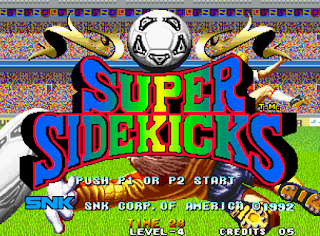 With our current season of football about half over I thought this was an opportune time to take a look at another game based on the ultra-popular sport. The first two examples I tried were quite early attempts, however, so I've instead gone for a slightly more modern take on the subject this time, in the form of this game which is, perhaps surprisingly, one of several such games on SNK's powerhouse arcade-based system. As a result of this arcadey nature, there are far fewer options than even the technically-primitive games I played before; just the two in fact - SNK Cup (one player) or Vs. Play (two players). Each player can then choose from twelve national teams split into two groups, and then... that's it, you're straight into the game! Fortunately, it's not too complicated. 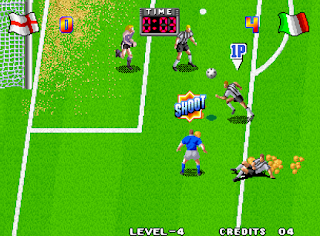 The SNK Cup is of course where I spent most of my time and it kind of takes the form of a mini-World Cup. Each match lasts six minutes (split into halves, obviously). You'll first play one of the other teams in your group. If you win, you'll play another. If you beat all five it's on to a semi-final against the winner of the other group, then the final. It doesn't make much difference which team you choose though, as there isn't really much between them other than their appearance and team formation. The controls are simple too. The ball is pretty much glued to your feet when you've got it (unlike those games where you need to keep tapping it), with one button passing to the nearest teammate in the direction you're facing (roughly) and the other button hoofing a long ball or taking a shot at goal. 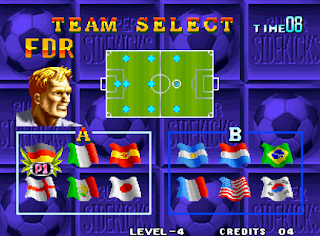 That's if you're within range of goal obviously, but the game helpfully indicates when you are. When you don't have the ball, one button performs a sliding tackle and the other performs what's described as a 'tackle', but actually looks more like a shoulder-charge. Either helps you retrieve the ball though, and, while there are free kicks in the game, they're not common - you can barge and slide into a player all day and still probably won't be penalised, and even if you were, there are no cards. There are throw-ins and corners (just point and press to take), and you can perform a few tricks (back-heel, overhead kick, dodge tackles), but the rules are basic, as are the controls, and that equals a fast-paced, flowing game with few interruptions. Even the goal-kicks are automatic! 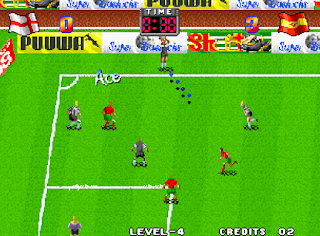 If you're losing at half-time it costs you a credit, and if a game ends in a draw you can either replay it or go straight to penalties, so you can get through the matches quite quickly too. That's assuming you can beat the CPU which isn't easy for two reasons. Firstly, you can't switch between players manually, you have to wait for the computer to do it for you instead, and that can cause a bit of confusion and delay your response to the regular attacking runs from your opponent. Secondly, there is no scanner/radar to show where the players are. Considering how your view of the action is quite close-up, that means you can never be sure where you're passing to, or whether to leave an opponent to another player further up the field of play to deal with (once the computer switches to him of course). 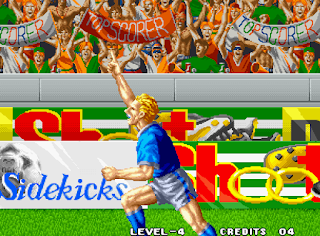 Maybe I'm just crap but these two issues made defending a lot harder for me than I would've liked. Plus, my goalie never seems to catch shots and most opponent goals came from ricocheting rebounds in the penalty area. It's an appealing game from a graphical point of view though. The action is viewed from an elevated side-on viewpoint and features nice vivid colours, the sprites are quite large and well-animated, and the presentation is great all round really, and includes some decent animated cut-scenes when you score goals and stuff. As mentioned, the game 'camera' is quite close to the action but it does zoom out a bit for goal kicks and set-pieces. The sound isn't quite as good though - there is some good quality speech and the effects aren't bad, but the music isn't great. 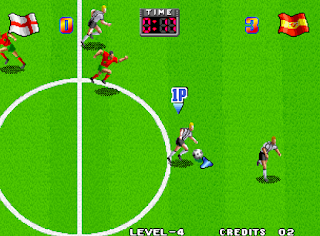 It's obvious from the audio/visuals that Super Sidekicks is an arcade game though. Not that you would fail to realise but you know what I mean - the style is very typically arcadey, and that's also true of the gameplay. Accordingly, it's somewhat less refined than many other football games. In the short-term it's quite addictive, even in spite of its flaws, but any long-term appeal is questionable. I think I would grow bored of it pretty quickly, even in two-player mode. I suppose it could be recommended for what it is - a quick five-minute diversion when you happen to be passing though an arcade (not that you're likely to find it these days). In that capacity it's pretty good fun and satisfying to do well at, but there isn't really enough here to it to satisfy home gamers, or indeed footy fans.

Gameplay Video: for some reason I can only find videos of the Spanish version of this game, but here's a taster of the game anyway, courtesy of Espaciodejuegos.