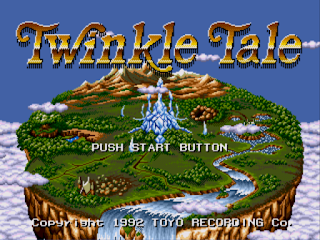 As was often the case with games exclusive to Japan, I heard a few murmurings of Twinkle Tale back in its day, but I never saw it on sale anywhere and certainly never had the chance to play it until much later - long after the MegaDrive had been and gone (as a 'current' system at least) in fact. Typically, it costs a blinking fortune to buy these days but, happily, after receiving a push courtesy of a Top Cat-inspired Facebook group of retro shmup fans, I've finally had just that chance and was a little surprised to find that it's not the standard vertical-scrolling shmup I thought it to be. It's actually a more run 'n' gun-ish take on Techno Soft's classic Elemental Master which means you control a human(oid) character who scampers about the various stages on foot. Here, however, there's no auto-scrolling, nor any time restrictions, so you can proceed at your own pace. Splendid :) 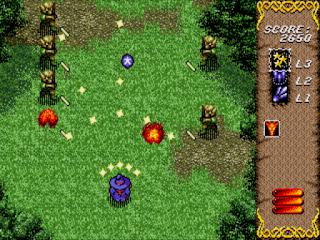 The fantastical adventure is set on what would become the world of Alpherion. Here, three lights (red, green, blue) have been battling for domination (yes, really). During the course of their battle, though, the idiotic 'lights' somehow managed to create two new lights - black and white. The latter desired peace above all and locked the others in crystals, encased itself in diamond, and created Alpherion. Years later, an apprentice magician called Saria is alerted by a fortune-teller to dark wizard Gadou's plans who has mobilised his forces. Basically then, despite this frankly rather weird back-story, it's another 'evil guy is being evil and only you can stop him' kind of game, but that's fine; we're always ready to save the day, right? Especially with such an appealing young lady as Saria under our control, who reminds me of the equally pleasant girly from Engine shmup, Magical Chase. Except she's purple. 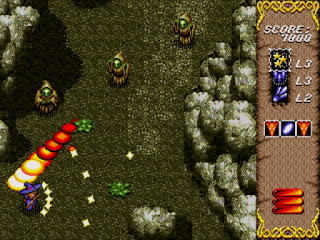 She is pretty nippy too (fast, not cold) and has a decent selection of attacks for a mere apprentice. There are three main weapons and she starts with them all - a starry spreadshot, a powerful forward shot, and a wobbly homing shot. You can switch between them as you please and each has three power/range levels which can be increased by collecting star icons. Other collectibles include more energy (you start with three blobs, though more can be added later) and... magic attacks! There are two of these: fire and ice. The former will unleash devastating pillars of fire while the latter unleashes three giant chunks of ice, but both have a similar effect - smack up any enemies in the vicinity. With all these attacks to choose from you might think Saria's job is an easy one. Unfortunately, however, she only has the one life, and those pesky dark forces of Gadou are out to ensure it's a brief one too. 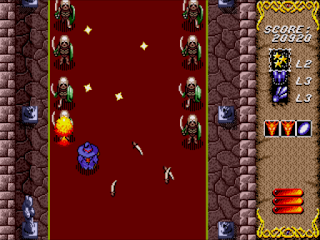 As mentioned, the game uses push scrolling rather than forcing you along with auto-scrolling. Much of the time the stages scroll vertically as you would expect, but some sections scroll horizontally as well, and there are multiple doorways leading from one area to another as well. Even more splendidly, most stages feature at least one fork in the main path, offering alternate routes to the boss, one of which is invariably quite a bit tougher than the other. This variety in the stages adds a lot to Twinkle Tale's appeal too, not that it was lacking to begin with thanks to its superb audio/visuals. Being a fantasy-themed game, most of the stages are set over mystical plains, rocky mountainous passes, enchanted forests, spooky caves, fiery caverns, great castles and their surroundings, and all sorts of other stuff. Some stages even take place over precarious pathways and platforms high above the ground. 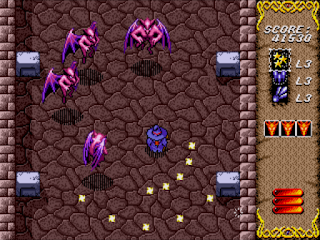 These stages can be the trickiest actually, as there's less space to dodge the enemies and their shots. These oafs take many forms, most of which are either scary monsters or even more terrifying ghouls and other denizens of the netherworld. As you can probably see from the screenshots, they are superbly drawn and suit the theme of the game perfectly, and Saria herself is great too, even if you do mainly see her back. The bosses are also superb, though rather less varied as some of them are repeated, and they include some bizarre creatures. The first, for example, is a flying multi-headed lion/dragon hybrid while others include a legless undead knight, and an angry tree with unsettling eyes. The audio is also top-notch, consisting of some very pleasant effects and an outstanding soundtrack that makes a perfect accompaniment to the magical adventures and bizarre happenings in Alpherion. 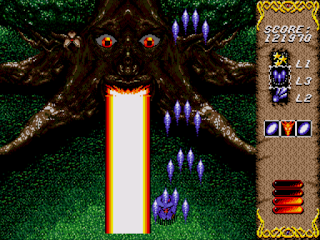 As well as looking and sounding as appealing as about any other MD game I've played, Saria's quest is also a long one. It will take most players well over an hour to get all the way through its nine stages, and that's assuming you can even get that far. When you take a hit you only lose one power-level of your current weapon (as well as an energy blob), but you do only get the one life, and since the crafty enemies usually attack in numbers, often from multiple directions, it doesn't last long at first. It doesn't help that some shots are hard to see, or that you can still take damage while using magic, but you do at least get an energy refill when you finish a stage. Much practise required then, but it's definitely worth it for the graphics and music alone. The fact that it has lots of varied stages just makes it even better. 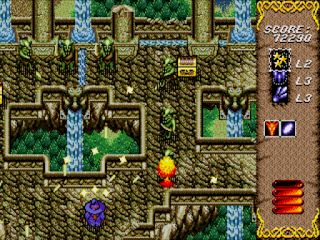 Indeed, once you get used to the controls, specifically switching between the weapons and knowing where to use which, and played the stages a few times in order to learn the danger spots (which can include a few surprises such as falling boulders), it's really not that tough a game. I wouldn't go so far as to call it relaxing but the pace of the game is at your disposal for the most part, and it's not nearly as hectic as many other shmups or run 'n' gunners. It does have a few contemporaries on the MD though; the aforementioned Elemental Master is the most obvious one, and also Undead Line (which is rather hectic!), but I think Twinkle Tale can stand proudly beside them all. From the moment I started playing it it's been a very pleasant surprise I must say. Lord only knows why it wasn't released anywhere else, nor why it garners little affection among most retro gamers today. It sure deserves to.