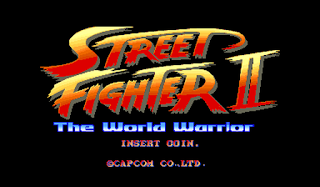 It has long been my intention here at Red Parsley to feature many more fighting games, but whenever I play one I often find my thoughts wandering back to this game. I therefore figured I might as well give it a quick review and see how it holds up today. It did, after all, directly influence a good few of the many games that came after it (and that's putting it mildly!). For many it's where the genre began, but even those who know better still recognise the enormous contribution it made to the genre. Scrolling fighting games such as Double Dragon had been proving quite popular for years but, despite also being around for a while - probably even longer the scrolling variety, in fact, the one-on-one style of game hadn't caused too much of a stir until this behemoth arrived.

Even the first Street Fighter had passed by with nary a head turned a few years earlier, so I'd doubt many players were breathless with anticipation for the sequel. That all changed, of course, when people started playing it and a full-scale gaming revolution swept the world! Not only were one-on-one fighting games suddenly popular but even the arcade industry as a whole was revitalised after a few years of slow stagnation. Whether you agree it deserved such adulation and reverence or not is debatable but one thing surely cannot be disputed - it was an enormous improvement on the frankly rather substandard original game, and perhaps one of the biggest such improvements any game series has ever seen.

Perhaps the most obvious of these advances is the ability to choose a character. Here, before we had the 'Champion' or 'Super' editions of the game, there are of course eight options - Ryu and Ken, the only characters to return, as well as Chun-Li, E. Honda, Dhalsim, Blanka, Guile, and Zangief. Whilst perhaps a bit clichéd, these hulking oafs were certainly a varied bunch, and the move-sets they have been equipped with are greatly expanded since the original game too. The now-classic six-button configuration introduced there had been retained but the number and variety of moves that can be pulled off (giggity) with them is substantially greater as well as more visually pleasing, especially the lovely projectile attacks.

As well as Ryu & Ken's old familiar moves, each character now also has grab/throw moves as well as their own set of special attacks. Some were performed slightly differently than those of the two karate dudes though, and I never quite got on with the characters who had 'charge' moves such as Guile and his Flash Kick, or Honda and that pesky Sumo Headbutt. Still, I'm sure many did, and having eight selectable characters rather than two was already a substantial improvement. Of course, those who managed to defeat the remaining seven characters soon discovered there was now four boss characters rather than two as well, including Sagat, the boss of SF1, and the fearsome M. Bison and his psycho power!

The differences between the two games went right across the board though. The slightly bland, weedy characters of the first game were replaced by much larger and more vibrant ones here. Some were a bit corny, almost caricatures in fact, but they were also great designs and each was very distinctive. The animation was much improved too, and the weak backgrounds seen before were replaced with much more appealing locales, many of them bustling with activity from gathered onlookers cheering for their local hero. It certainly improves the atmosphere no end, as does the music which is fantastic. Each character/stage has its own theme and most of them really are superb, rousing anthems guaranteed to get you pumped up.

I could do without those constant bloody elephant noises that nearly ruin Dhalsim's stage actually, but the rest are great, and the effects are even better, both visual and audio, the latter of which now includes a few spoken phrases too. The combat is much more refined now as well, with well-balanced characters, responsive controls, and the introduction of combos. It's hard to emphasise how much of an improvement it was over the original actually, but it was undoubtedly worth the effort for Capcom. Its impact on the gaming world, and even the world generally, was phenomenal and I imagine it must still be one of their most successful games of all-time. The one-player game offers a good challenge but the most fun comes from competing against friends. But what if you both like the same character?

This and many other nit-picky little issues would be addressed in the many updates, sequels, and spin-offs that quickly started appearing. It got a bit too much for some, actually - even a (not very good) movie arrived before long! Suffice to say, it's a game that left a more than sizeable legacy. New games are still appearing, and they're still a big deal too, and none of it would have happened if it weren't for Noritaka Funamizu and his talented team. It may have been rendered somewhat obsolete by its later incarnations, and playing it now, after years spent with the Alpha games and Third Strike, it does seem a bit slow, and the gameplay options are far more limited, but the balanced characters and fights are still as great as ever and it still plays well. A pivotal release and a genuine all-time great.