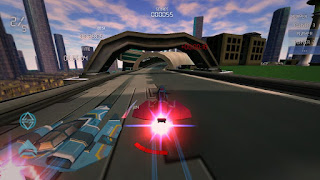 I have long been keen on futuristic racing games so when I saw this one for a great price on Steam I snapped it up. A little while later I started playing it with a view to reviewing it. So why merely a 'First Look', you might ask? Well, that's mainly because I'm not completely convinced the game is finished! Upon loading it for the first time, you see, I found no title or options screens and what appeared to be an extremely rudimentary course selection screen which offered three choices, two of which seemed to be the same. Nonetheless, I picked one, then selected the only jet-craft-thing that was available, and... nothing. What the hell were the controls?! The control pad didn't work, the mouse didn't work either. Eventually I found the correct keys, though, and started moving. 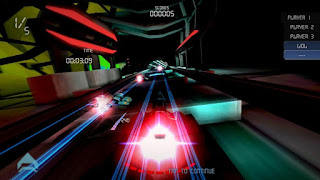 I got far enough to catch up one back-marker and to discover there are boost pads and weapons, but then... the game crashed. I loaded it again, and it happened again, though not in the same place. So I uninstalled it and reinstalled it, and it still happened. Sadly, I have still been unable to finish a race, and judging from what I've read online, I'm not alone - it's apparently a common problem, and one which has yet to be rectified, and that vexes me. It looks like it could be decent enough were it not for the apparent crash-causing bugs and atrocious presentation, so if PiGravity ever get around to ironing out these sizeable issues and... well, finishing their game, it might be at least a passable racer, or even a good one, but at the moment I can't even play it really.

To find out more about this confusingly-unfinished racer, check out its Steam page here. Meanwhile, here's a short gamplay video that demonstrates it is at least possible for someone to finish a lap! (and yes, my PC meets the recommended specs for the game) :)