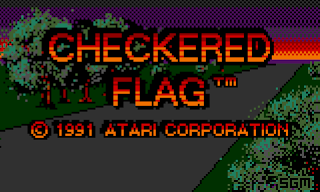 Most attempts at driving games on the pre-CD-based consoles were a bit hit and miss in terms of quality, and you might think that would apply even more to the handhelds, what with their small screens and modest tech-specs, but if one of them could produce a genuinely playable example, it must surely be the Lynx. It was capable of some rather fantastic sprite-scaling after all, which, in the right hands, could result in some impressive pseudo-3D graphics not dissimilar to the SNES's celebrated Mode 7. Of course, though important in this genre, decent visuals aren't everything either. I was more interested to see if there was actually a decent game underneath them, and soon after first trying the game, it seemed as though there was. 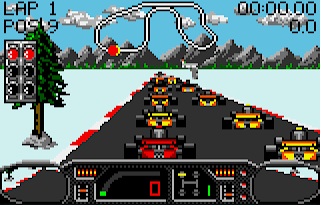 The options screen certainly gives a good first impression. It's an F1 (or Indy) style racer and features a mighty impressive 18 courses, any of which can be selected from the start. You can also choose how many drone (CPU-controlled) cars are in a race (up to nine), set the number of laps (from 1 to 50), choose between manual (4 or 7-speed) or auto gears, change the colour of your car, and even select either a male or female driver. You can also do a qualifying lap or choose to start in a random position rather than at the back (as with every other racing game ever), which is splendid, and there are three game modes - Practice, Single Heat, and Tournament - which are all fairly self-explanatory, and in which up to six-players can compete via link-up. 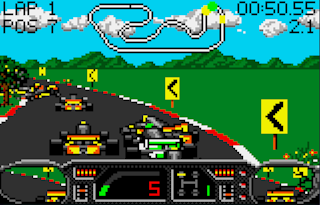 That is also rather impressive, but let's face it - most of us will only ever race against drones. Happily, the game wasn't designed only for multiple human players and offers a good challenge for the solo player too. A very good challenge in fact! Getting round the courses isn't too taxing - there's no time limit and the steering and brakes work well enough; it's very reasonable to expect to complete a lap without going off the circuit once if you're not driving like an idiot. No, the challenge comes almost solely from the other cars. Admittedly there's only as many as you yourself select beforehand but any self-respecting player will select lots of them. The trouble is, the track isn't very wide and any contact with another car will cause both of you to spin out. 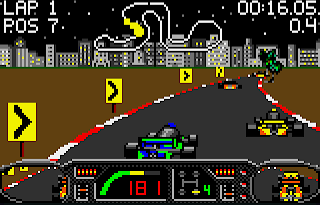 This unsurprisingly leaves you miles behind the main pack and the one-lap (default) race is far from long enough to be able to catch them up. This leaves you with a choice: do you keep the race short and hope you don't hit anyone (or get hit by anyone), or do you make it longer giving you time to catch up but also increasing the chance of you hitting someone, probably multiple times? Attempting to use the edges of the track to steer around your opponents is not recommended either, as you'll stop dead if you hit one of the many roadside objects (even bushes), and that can cost even more time than spinning. It's a toughie either way, with races proving frustrating as often as satisfying. As always, though, patience and practise will reward players accordingly. 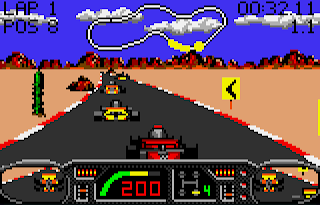 There are at least plenty of tracks to try out. They have cool names like Grizzly Flats, Skull Valley, and Black Canyon, and they are quite varied, all things considered, with several types of terrain (besides the track, obviously) and scenery, and even a couple of night races. The aforementioned scaling is top-notch though. The scrolling is pretty smooth and things can get rather fast on the odd occasion you're actually able to get up to a decent speed. The audio isn't so great though. The effects aren't bad and there is some typically superb speech before each race but no in-game music. Still, you can't have it all, and overall this is yet another Lynx game that impresses from a technical point of view; I just can't decide if I actually enjoy playing it or not. 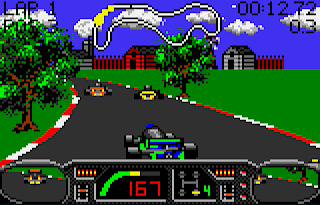 Much of the time, races are fast and exciting. Passing other cars is always a thrill, especially several in succession, and it shouldn't take too long before you start winning (which is rewarded with a kiss by a scantily-clad guy or girl). It does usually take a near-perfect race though, and races frequently are not perfect as you might imagine, and that quickly makes them much less enjoyable, to the point where you might as well press the reset button. There is a lot of enjoyment to be had here though, particularly the eight-race tournament, and even more so in the unlikely event that you can play it with five friends via link-up which can be fantastic. Racing games aren't too plentiful on the Lynx either, so Checkered Flag is definitely worth having anyway.