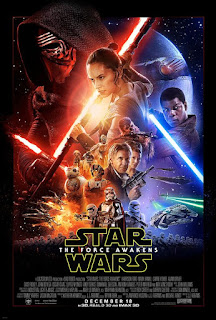 Tagline: "Every generation has a story."

If you have any kind of online presence, or indeed an actual social life with real people and all that junk, the latter few months of 2015 will have seen you fall into one of two camps: first were the so-called nerds who were counting the days until the new Star Wars film arrived with varying degrees of excitement; second were those who were unable to understand what all the fuss was about and couldn't give two pieces of monkey crap about anything including the words 'Star' or 'Wars'. I have definitely been in the former camp. Like many around my age, I grew up with the original trilogy of films. I probably didn't see them at the cinema as I would've been too young (certainly for the first two), but I watched them on trusty VHS over and over again, had tons of toys and action figures thanks to my lovely parents, and all sorts of other stuff. I even had Return of the Jedi bedding! These were happy years and ones I fondly look back upon often.

But then came the darks times. At first the once-worshipped George Lucas busied himself tinkering with his earlier films. This resulted in the 'Special Editions', but then came the prequel trilogy. Many greeted them enthusiastically at first but the more time that passed, the more scorn was heaped upon the hapless films. Some of the die-hard fans were so incensed that they didn't even consider them as Star Wars films at all. After all these years of indifference, frustration, even fury, news of Disney's acquisition of Lucasfilm and subsequent announcement of a sequel trilogy was met with trepidation. Would they just be concentrating on trying to wring as much money as possible out of their new division or would they actually devote the time and money needed to produce the films fans have been crying out for all these years? When the casting, photos, and then teaser trailer appeared, things started looking increasingly promising.

I'm sure by now most of you have heard the basic story: events are set approximately 30 years after the last film (chronologically), the First Order has risen from the ashes of the Empire, and the thorn in their side is now known as the Resistance, led by General Leia. The First Order is led from afar by Supreme Leader Snoke (Serkis) and more directly by 'dark warrior' Kylo Ren (Driver) and General Hux (Gleeson). Their objective, beyond ruling all and being generally unpleasant, is to destroy the Republic and kill the last Jedi, Luke Skywalker. The only trouble is, he's gone into a self-imposed exile. Of course, there is a convenient map leading to his hideaway which was hidden in a spherical droid called BB-8 by Resistance pilot, Poe Dameron (Isaac). They got split up though, and the bloopy trundler has now fallen into the hands of a scavenger called Rey (Ridley) and an ex-Stormtrooper known as Finn (Boyega).

You could be forgiven for thinking that at least some aspects of this story sound familiar, and indeed, there are similarities with some of the previous films, in particular the very first (A New Hope). That doesn't concern me as much as it does some though. If I'm being honest, much of the excitement I was feeling was simply due to the prospect of experiencing the sights and sounds of Star Wars again, and seeing some of the characters I grew up with again after all these years. As is probably obvious from the trailer, the most prominent of these are Han Solo and Chewbacca and it really is wonderful to see them again. It's like bumping into old friends, with the instant familiarity and enthusiastic catching up. Ford in particularly seems immediately comfortable back in the role and it's interesting (though not very surprising when you think about it) to see what Solo has been up to in the intervening years.

It's not just about the old faces returning though. Among the many things fans were critical of in the prequels was the characters and performances behind them, or at least some of them, so I was also interested to meet the brand new characters as well. There are many of these including cantina owner Maz Kanata (voiced by Nyong'o), Stormtrooper commander Captain Phasma (Gwendoline Christie) who certainly looks cool but doesn't actually do a great deal, and the 'best freaking pilot in the galaxy' Poe Dameron who is indeed impressive in the cockpit of an X-Wing, but there are four main newcomers on whom events are focused, with two on either side. Of them, Daisy Ridley probably features most prominently in the film's promotion and her Rey quickly becomes a heroine that you instinctively root for as she struggles to get by on the dusty world of Jakku, desperately awaiting the return of the parents who abandoned her.

Stealing the show for many though (not counting the old characters, obviously) is John Boyega as reformed Stormtrooper FN-2187, later dubbed Finn for short, whose enthusiasm for... well, pretty much everything, accounts for a good portion of the humour in the film. Representing the Dark Side are Adam Driver and Oscar Isaac but I couldn't help feeling the teeniest bit disappointed by both of these 'bad guys'. The latter was rather bland and forgettable, I found, with his only scene of note being his grand speech before the gathered masses of the First Order, while the former initially appears to be the textbook evil merciless dark lord, but is later revealed to be more of a rebellious child who has a tantrum every time something doesn't go his way. Ren is no Darth Vader, but on reflection he's not really meant to be either, and I suppose the idea of a conflicted, unpredictable enemy is more realistic too.

The lack of a genuinely imposing, charismatic evil bad guy is about the only remotely negative thing I took away from this though, and as you've no doubt already heard from countless others by now, The Force Awakens is no prequel-smelling turkey. It may not have a totally unique story but it's pretty much exactly the sequel that fans have been hoping for all this time. Importantly, its look and feel is pure Star Wars all the way. It's wonderful beyond words to see Han Solo and Chewie confidently charging about the place again, blasters in hand (and Chewie's crossbow seems to be miles more powerful now too!), as well as the rather more world-weary Leia with C-3PO and R2-D2 in tow, and it's equally fantastic to see X-Wings and TIE Fighters zipping around taking pot-shots at each other, not to mention seeing the Millennium Falcon taken out of mothballs and once again swooping around gracefully (and less gracefully perhaps, too!), but the new stuff is all great as well.

The new characters are well cast for the most part and they're very appealing too. Crucially, there's no Jar Jar here to drive you up the wall either. I suppose the closest equivalent would be BB-8 but he's the polar opposite in terms of pure annoyingness. It's pretty amusing watching him trundle about the place (he can even go down stairs, albeit rather slowly!), bleeping and blooping as he goes. Most of the dialogue is good too, and the many special effects are predictably stunning, but the best thing about the film is simply how it makes you feel. There are tons of (most welcome) nods to the previous films which will have fans smiling throughout but it's not just nostalgia - there's more emotion than there was in all of the prequels combined, including more humour than you might expect. Sure, there are a few small plot holes (as so many 'edgy' and 'controversial' critics have pointed out), but it's basically everything you hoped it would be. Welcome back Star Wars, it's been a long time. Too long...