So, fresh from the ratings surge resulting from her introduction the previous season, Star Trek Voyager is over and The Seven of Nine Show has begun in earnest! That's the way many felt at least, including a certain Kate Mulgrew who apparently gave Jeri Ryan a hard time on the set. That sort of thing is never nice to hear but this fifth season was a superb one - I could've made a top ten this time! 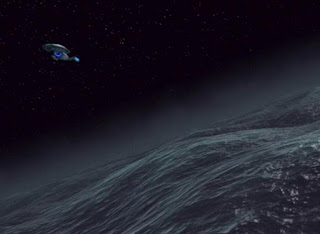 A mere five it is though, as always, but besides those, happenings this season include the introduction of a new semi-villainous race known as the Malon who like dumping tons of radioactive waste all over the place. Here, the crew first encounter them in a vast region of space known as 'the void' with no stars visible in any direction (i.e. spooky), a transporter accident results in the birth/creation of a super-powerful Borg drone, and in one which is both good and a bit annoying, B'Elanna is down in the dumps, suicidal even, while the rest of the crew are involved with (somewhat improbably) building a new ship - the Delta Flyer. Elsewhere, the crew discovers a Species 8472 training facility which is modelled on Starfleet headquarters, Neelix distracts Naomi with stupid holodeck fairytales while her mother is missing, Seven takes on the personalities of various people assimilated by the Borg, and B'Elanna is sucked by a vampire-worm thing.

One episode that almost made the cut features Tom getting demoted and thrown in the brig for disobeying orders when the crew find a giant ocean in space which the occupants are slowly destroying. Following that, the Doctor finds that someone has been deleting some of his memory files, Tom and Harry are joined by Janeway in one of the less-boring Captain Proton adventures, Tuvok and Tom are stranded on a planet where a weird girl falls for Tuvok (this one also nearly made the cut), a giant space monster eats Voyager, Harry bumps uglies with a girl aboard a huge, sectional generational ship, and in one of my old favourites, the ship becomes all gloopy as the crew discover they actually aren't the crew at all.

Rounding off the season, Chakotay communicates with aliens by becoming a boxer, Janeway is offered the help of a weird 'think tank' led by a squinty guy called Kurros, the crew help a Malon ship which is leaking radiation, Seven tries her hand at dating (yes please!), Janeway reminisces about one of her ancestors, and the crew rescue a sentient WMD which refuses to believe the war it was built for is over. So, like I said, lots of good ones this season, but here are the five I settled on: 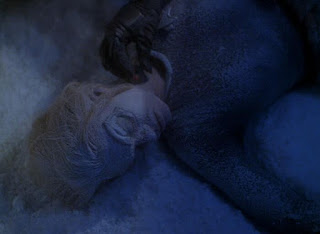 This is the first of two floopy time episodes this season and it starts with Voyager encased in ice under an inhospitable planet's surface. Searching through it are a notably older Harry and Chakotay who are looking for one of Seven's twiddly bits that will help them prevent the disaster from occurring to start with - a disaster only survived by our two elderly friends and which Harry caused by being an oaf while they were messing around with quantum slipstream technology. In other words, an attempt to get them home faster resulted in them not getting home at all. Ooops! Harry and Chakotay's attempts to alter the past have made them wanted men though, and, in a splendid cameo, are being pursued by Captain Geordi La Forge! These meddling-with-time episodes aren't always great but this one is a corker. It's surely Harry/Garrett Wang's best episode and features several great moments - Seven getting drunk is chortlesome and Voyager's crash, which we do indeed get to see, is brief but superb. It's even a landmark episode in Voyager's run too - the 100th - and it's more than worthy of the distinction. 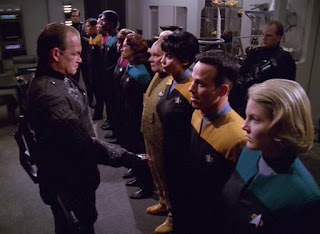 In typical Voyager fashion, events have happened between episodes and a new pain-in-the-arse race has been encountered, namely the Devore, whose space Voyager is currently travelling through. Only problem is, they hate telepaths and will not permit them in their territory. Voyager has a few mind-walkers itself (including Tuvok of course) plus Janeway happens to also be transporting some telepath refugees as well. In order to complete its transit, Voyager must submit to regular (and very thorough) inspections. During these times the telepaths are hidden in a transporter beam but they can't stay there for long. Luckily, the Devore leader, Kashyk (Mark Harelik), has apparently taken a shine to Janeway and attempts to defect and help Voyager through Devore space. Or has he? I'm sure you can guess but the relationship between the two of them is great while it lasts, as are the inspections by the ghastly Space Nazis (though not for the crew, I'm sure). No long term significance here really, but it's a highly enjoyable one. 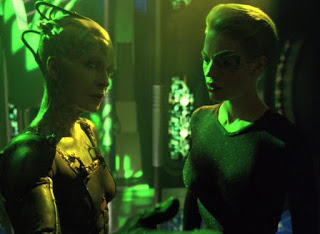 Another two-parter, another Borg encounter, but this one is a little different - this time Voyager seeks them out. Only a crazy fool like Janeway could conceive a plan like that! Her plan is to find a damaged Cube and steal a transwarp coil, thereby accelerating their journey home (for a while at least). The daring/stupid heist is planned and rehearsed down to the smallest detail and when a suitable ship is located, it's put into action. All the holodeck simulations in the world can't account for every contingency though, and sure enough, Seven decides to surrender herself to the Borg Queen to aid Voyager's escape. It was a very nice gesture of hers by all accounts but she apparently didn't reckon on Janeway and her inability to accept disobedience, even with good intentions, so she resolves to rescue her busty subordinate who has been asked to help the Borg assimilate Earth. Like most Borg episodes, there's plenty of drama and tension but it's also interesting for its flashbacks of Seven's parents and their mission to observe the Borg - a rather stupid and irresponsible one in hindsight, but a very intriguing one too. 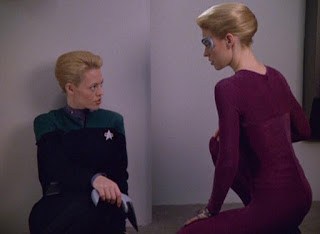 As mentioned earlier, there are two time-wibbling episodes this season and this, the second, is also a bit of a corker. It features the return of Captain Braxton, this time in command of the Starfleet timeship Relativity, who has recruited Seven to locate a bomb that was placed on board Voyager at some point in its past. First she has to find it, then catch the dastardly rapscallion responsible for putting it there before Voyager suffers the same fate as before - its complete destruction! It's a nice take on the time-travelling theme and even gives us a look at Janeway and her brand new ship before it left the drydock at Utopia Planitia which is also great to see. Even more splendidly, it features not just one but two Sevens, and that means four... ummm... never mind (cough)! Whether you're experiencing a Seven overload or not, this is definitely a strangely enjoyable episode, particularly Seven attempting to avoid detection on the earlier Voyagers. There are a couple of small continuity errors but that's the only thing I can find wrong with it really. Seven looks pretty good in a normal Starfleet uniform too. 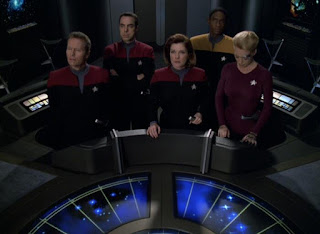 Lastly, I plumped for this, the final episode of the season which is, unsurprisingly, the opening half of a two-parter which sees Voyager receive a distress signal... from another Federation ship. Eeep! It turns out to be the USS Equinox which had, it seems, also been stranded in the Delta Quadrant by the Caretaker. However, it only has a skeleton crew left and, upon being joined by Voyager, is being attacked by nucleogenic lifeforms. Initially ecstatic to have found each other, the two crews have fun exchanging DQ stories, but relations soon sour when it's discovered just how the Equinox has made it so much further than Voyager and why it has apparently incurred the wrath of the gremlin-like floaty aliens that are relentlessly pursuing them - and now Voyager as well. It's a nice change of pace to start with though, and the Equinox's crew are an appealing bunch for the most part. It's a shame they couldn't adapt to Janeway's strict regime, but we'll see more of them in part two. That's if our beleaguered crew manages to find them!

Look out for my Season Six picks soon!