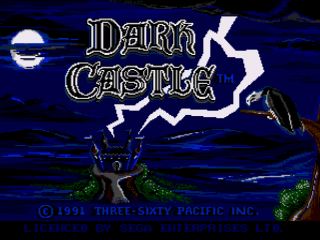 Poor old Dark Castle, I nearly blocked it from my memory... Along with the previously-reviewed Ace of Aces, it remains the recipient of the lowest magazine review score I ever remember seeing in the usually-generous magazines I used to read - in this case little more than twenty percent! I've been understandably wary of the game ever since but in the best spirit of Red Parsley, it's time once again to be brave and find out if it really is... that bad. The premise is at least a reasonably promising, if rather unoriginal one - predictably, it's set in the titular fortress where the evil, tyrannical Black Knight resides. The courageous Prince Duncan, however, has had enough and decides to topple the cretinous knight from his throne. This, of course, entails successfully making his way through the castle which is fraught with dangers beyond count. 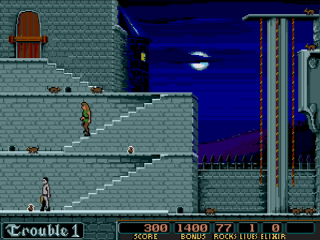 It's a fairly spooky castle too. The game begins in the 'Great Hall' from where Duncan can choose between four doorways, each of which represents a succession of stages. You can tackle them in any order you like but it soon becomes apparent that it's best to do so in a particular order. This is because of what lies at their end - something which gives each path its name. The two doors on the left lead to the Trouble and Fireball paths. The former of these has no special reward at the end but the latter bestows the ability to shoot flamey projectiles upon Duncan - if completed, of course. The door to the right of the Great Hall leads the the Shield path, successful completion of which awards Duncan with the necessary defensive item needed to tackle the Black Knight. The last door, inconspicuously marked with 'BK', ends with the climactic confrontation to end all others. 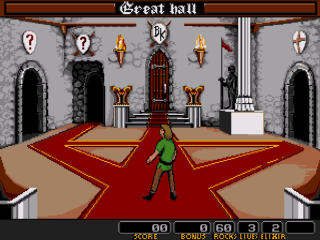 There are fourteen stages altogether - three each on the 'Trouble' and 'Black Knight' paths, four each on the 'Fireball' and 'Shield' paths - and each takes places over a single-screen. This invariably involves making your way from the starting point to the opposite side/corner of the screen. Between those two points there are numerous scary creatures such as bats, rats, weird little alien things, and even a few nefarious humans. Duncan is a fragile fellow though, as contact with any such creature causes instant death. Even falling a short distance or walking into something stuns him for a second or two! His only means of seeing off the creatures, at least until he obtains the fireballs, are a finite supply of rocks which he can throw. One is enough to dispatch most enemies (although they soon respawn) and the angle of his throw can be adjusted but that's about it! 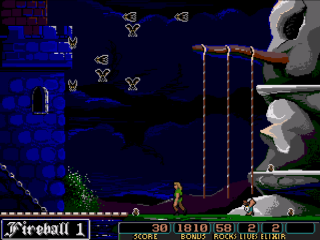 He can pick up more rocks, found in small bags here and there, and elixirs pop up now and then as well which act as one-hit shields but the help they provide is limited for several reasons. Firstly and definitely foremost, control of Duncan is very sluggish, unresponsive, and fiddly. Trying to make him do what you want, when you want him to is often difficult or even completely futile - for example, one screen has him ascending platforms and jumping rocks, Donkey Kong-stylee, but his jump is so erratic and imprecise that successfully doing so is complete luck! He can't attack while moving up or down stairs, or while climbing ropes/ladders either. Enemies still attack at these times though, of course, which, along with the awful controls, makes playing it a tremendously frustrating experience. 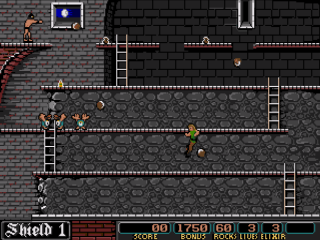 While looking into this game I soon discovered that this MegaDrive version was one of the last of many ports the game received since its début on the Apple Mac back in 1986. Most other versions are seemingly well-regarded, or at least not frowned upon as much, so it would seem logical to assume that the horror that is Dark Castle MD is a result of the conversion, not the original game. I'll have to play some other versions to be sure of course (I'm not convinced they'd be great either but we'll see!) but this is certainly a lazy port - the graphics are way below usual MegaDrive standards with tiny, poorly animated sprites, few colours used, repetitive backgrounds, and simple patterns for the foregrounds. I must admit, I didn't spend long playing it, but in the short time I did spend with it, I'd already seen most of what the game had to offer. Just about its only redeeming feature is its sampled sound, which has its fans, but it's far from enough to save this poor game from being consigned to the darkest corner of the gaming graveyard. Without question one of the worst MegaDrive game I've yet played...