I've got a pretty sizeable collection of DVD's but even a big collection can seem boring at times. It was during just such a period of boredom and indecision that I decided to join the much-heralded Netflix for some additional entertainment options.

As impressed as I immediately was with the service and user-interface, the selection available was a bit disappointing - nearly every title I searched for was 'unavailable to stream'. Based on my searches, however, it recommended that I watch Kickboxer. Hmmm, here was an old favourite that I hadn't watched for... probably at least 15 years, so why not!

Not only did I enjoy it once again but it also reminded me of the former splendour of Jean Claude Van Damme's films. To such an extent, in fact, that I was soon re-watching some of his other earlier films! In most cases I was again met with the already-dreaded 'unavailable to stream' but luckily this didn't stop me! Here are my five favourite from the late 80's/early 90's action legend: 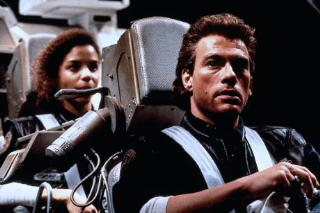 This sci-fi actioner was, unknown to me prior to writing this list, based on a comic released earlier the same year, which may account for it being by far JCVD's biggest hit at the time and, surprisingly, it remains his highest grossing film so far. It's also probably one of the best-remembered of his earlier roles. It stars him as a 'Time Enforcement Commission' agent who is charged with policing the recent discovery of time-travel, which of course has already been misused, whilst fighting the urge to misuse it himself to save his wife who was murdered some years before. Cue all manner of corrupt politicians and various other nefarious characters giving him the run-around through the years! Like most time-travel stories, there are a number of plot holes and inconsistencies but they don't stop Timecop from being an exciting and enjoyable nonsense-fest. 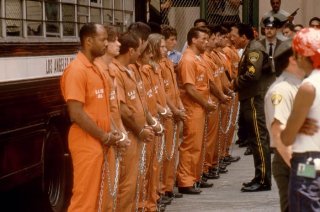 Prison films are nearly always cool so one starring the 'Muscles From Brussels' certainly had that potential! Of course, he's not really a hardened crim - he's actually a detective who we first see nearly getting killed by a psychotic killer known as Sandman. After a period of recovery, he's sent into prison undercover to investigate a series of unexplained deaths there. Even the prison staff don't know his true identity so he receives no special treatment and it's a harsh place, made even more so when an unexpected prisoner is transferred there to ensure he doesn't make it out alive to report his findings! Also featuring Cynthia Gibb on eye-candy duties, Death Warrant may not be among JCVD's best known films of the era or the best prison film of all-time but it is an entertaining and action packed popcorn-muncher which remains one of my favourites... 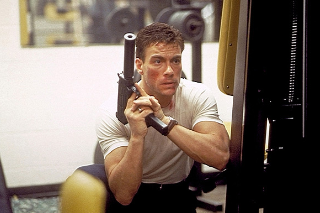 The most recent film on the list was typical of JCVD's films of the mid-to-late 90's where he often swapped his fists and feet for guns, at least a little. On this occasion he's a former firefighter traumatised by his failure to save a young girl and is now working as a fire marshal at a sports arena. Of course, it's not all plain-sailing as he discovers - a heinous terrorist group has kidnapped the US Vice President and wired the arena with lots of explosives which are due to detonate at the end of the ice hockey game being played. Typically, this is also the day his kids have chosen to accompany him to work! So, a horrified JCVD not only has to save them and take out the terrorists but also send the game into the overtime of the title so he has enough time to save everyone! Eeek! Sudden Death certainly doesn't feature as much chop-socky action as previous JCVD films but it's a tense and solidly entertaining offering all the same. 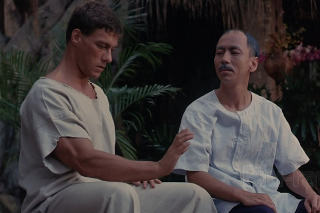 The catalyst for my renewed interest in the Belgian Beefcake, Kickboxer was the first film I saw of his since Bloodsport and, as you may have guessed from the title, is another martial arts-based film. This time it's not based on supposedly real events and instead sees JCVD cast as Kurt Sloane, younger brother of world kickboxing champion, Eric (played by real-life champion, Dennis Alexio). Looking for a new challenge, they go to Thailand to fight the champion there, Tong Po (played by JCVD's buddy, Michel Qissi) who, of course, destroys Eric! Seeing his brother confined to a wheelchair, Kurt vows revenge and soon finds himself under the tutelage of famed trainer, Xian Chow. I'm sure you can guess what happens next but Kickboxer was a more than decent couple of hours of training/fighting action which was great to see again just recently. See if you can avoid cheering for 'Nok Su Kow'! 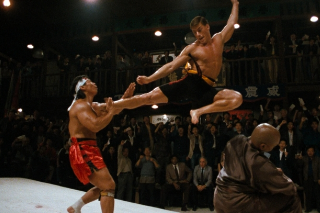 Yes, I know it's a bit corny and it's based on a possibly-nonsensical account of real-life martial artist, Frank Dux, but I still can't help but love this film! Mr. Van Damme, of course, plays the part of Sensei Dux who, whilst serving in the US Army, is invited to compete in the Kumite, a secret martial arts tournament held in the Far East. Go goes AWOL and the action soon switches to Hong Kong and the tournament itself which features many fighters of various disciplines including the obligatory evil bad guy played by Bolo Yeung. Also featuring Forest Whitaker in an early role, Bloodsport is the film which cemented JCVD's status as the next big name on the action movie scene. It's also an exciting and memorable film which made me want to learn martial arts like no other film!

Honourable Mention: No Retreat, No Surrender (1986) - Being his first film, he wasn’t the main star so you can hardly call it a ‘Van Damme film’ but he did make a memorable villain!
Posted by RetroKingSimon at 02:22