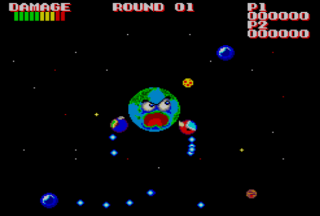 Considering the Master System, or rather Mark III's spectacular lack of success in its homeland, it's surprising to find that a few of its titles were not released anywhere else, even ones featuring popular characters. In some cases this is because they were designed for use with the equally Japan-exclusive paddle controller. I took a look at one of theses titles in a previous First Look post, and here is another - a Fantasy Zone game I knew nothing of until recently! Well, it's a bit of a stretch to call it an FZ game but it does feature Opa-Opa, and presumably Upa-Upa as well since it's a two player game. The little ships are responsible for guarding a series of planets from orbit and attempting to shoot down all the enemies and objects that head their way. It's a simple, no-frills game with basic graphics and sound and repetitive gameplay, and it's almost impossible to play with a standard controller, but I still like the look of it - I can see it being a lot of fun in short bursts. Now to find a paddle controller!