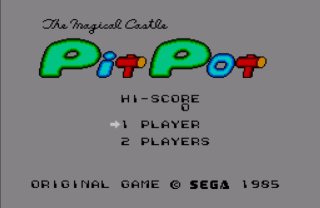 The Master System was quite an unusual console in some ways. One of these ways, and the one currently on my mind, was Sega's decision to accommodate two separate storage media - the traditional ROM cartridge of course, but also the Sega Card which were small credit-card-sized things known as 'My Cards' in their homeland. There wasn't a huge number of releases on the latter format though, and those that were released, due to the more restrictive nature of the cards, were smaller or more basic than their cartridge-based brethren and released at a cheaper price accordingly (here in the UK, at least). One 'My Card' game I've always wanted to try is this very game, mainly due to its amusing name, but while it was released as a standalone game in Japan, us UK gamers had to track it down elsewhere.

There were more than a handful of Sega Card games released here so I'm not sure why, but Sega only allowed UK gamers to play Pit Pot via an uncommon combo-cartridge on which it accompanied the splendid Astro Warrior. Least we got it at all though, I guess, and it has turned out to be a less-simple game than I had anticipated too (though only marginally so). It's story isn't though - a very short intro sequence shows some stupid princess getting kidnapped (big surprise there) by a big-nosed witch and taken to a slightly foreboding-looking castle from where she screeches for help. From here, you can choose between four difficulties - practise, beginner, average, and expert. Each consists of an overhead-viewed flick-screen maze in which you must find the princess after first collecting several important items.

Doing this involves taking control of a squat character who looks like a cross between Bomberman and the guy from Speccy game, Finders Keepers. Each room of the castle consists of a 14 x 10 grid which is filled in by various mixtures of grey floor tiles, which he can walk on, and black void, which he cannot, and is surrounded (though not always completely) by a border of gold tiles. To rescue the princess on each of the four difficulties, our heroic-yet-nameless knight must first find a cross to prevent her from turning into a witch, a potion to wake her up, and a ring so she'll marry him! There are also a number of jewels in each maze and it's necessary to collect those before rescuing her as well - if you don't it's game over, regardless of which other items you've collected or how many lives you have left.

Numerous enemy creatures prowl each room as well but there aren't many types - trolls, which come in blue or pink varieties, dragons, and hoppers. The trolls are most plentiful and just wander around like absent-minded oafs while dragons are stationary but always face you - when you walk past them, they'll spit a fireball at you - oof! The last kind of enemy is the hopper which is seldom encountered but, as their name suggests, can leap across gaps into our hapless hero. Of course, the merest touch from any of these rapscallions is enough to cost our brave knight one of his lives. Fortunately, he's able to smack them about with a large mallet. One strike sees them disappear in a puff of smoke but they respawn almost immediately in a pre-determined spot.

This sizeable weapon is also capable of destroying the grey floor tiles in the mazes and if you strategically take out the tiles linking floor areas to the gold border tiles, whole sections can be sent into the murky nothingness. This will take out any enemies on the section in question but it's also possible for a player to lose important items or even take themselves out too, so reckless hammering has its price! Destroyed floor tiles can be restored by hitting a gold border block at any time but this won't return any lost lives. There are some non-essential items dotted around the various rooms, too, including numerous treasures for bonus points and helpful things like the blue helmet (temporary shield), heart (freezes enemies for a few seconds), keys (have a guess), red helmet (extra life), and lyre (prevents dragons from shooting for a few seconds).

Despite taking so long to explain though, Pit Pot is still just a simple maze game at heart. The four 'castles' (i.e. difficulties) consist of over a hundred screens in total and clearing each isn't merely a case of avoid 'n' collect - some items are hidden and finding those is key to finishing a maze. One area the game definitely lives up to its budget origins, though, is in its aesthetics - the music is catchy but repetitive, the sprites and mazes all look the same aside from the layouts (including what looks like vomit over all the castle walls), and the animation and detail is quite poor, but since this is the least I was expecting it's fine and actually suits the game quite well. Some of the Sega Card games I've played have been pretty ropey so I was pleasantly surprised by Pit Pot which is far more enjoyable than I thought it would be, offering a decent challenge and remaining simple and addictive fun from beginning to end. Combined with Astro Warrior, it must've made a cracking cart!