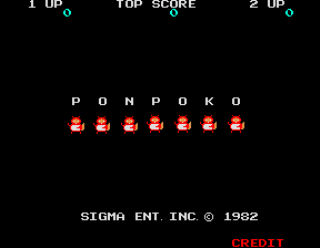 After recently struggling through the immensely difficult Choplifter again for the latest Arcade Shmup review here at Red Parsley, I was in dire need of something a little more relaxing to play so, what better time to search for and play another previously unheard of game?! These are often selected on the basis of an intriguing or eye-catching name and so was the case once again here. The main reason this particular title caught my eye is thanks to the splendid Studio Ghibli film, Pom Poko. Could this be a game based on it? That would be pretty cool but alas, as soon as I saw the '1982' on the title screen it became apparent that this was not the case. It does cast the player in the role of one of the creatures found in the film though - a tanuki or Japanese racoon dog, which are strange and mythical creatures of mysterious powers. Sounds intriguing so far... 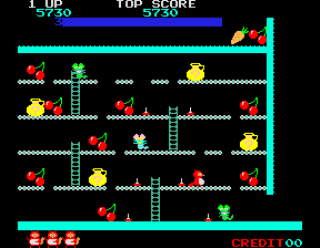 Alas once more, however, for there are few matters of mystery or intrigue to be found in this little-known game which charges the bright red, white bellied tanuki with collecting all the fruit on each of the twenty single-screened stages. Each of them spans four stories and are simple platform 'n' ladder affairs. Our hero can climb up and down ladders and perform a small jump but cannot fall any distance without losing a life. Platforms are also patrolled by evil creatures which look like mice, contact with whom has the same effect. They have very simple movement patterns but can pass straight over any small gaps in the platforms which our tanuki has to jump across so they still cause a bit of trouble, and there are also objects which look like upturned drawing pins that cause death from the merest of touches. The only other items to be found are mystery vases which may either contain bonus points or... an slow-moving but deadly enemy snake! 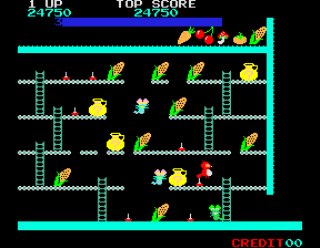 The first thing that struck me when playing this game is how similar it was to so many other early platformers I've played over the years, particularly one of my favourites, Chuckie Egg. However, it turns out that Ponpoko actually predates A&F Software's classic as well as numerous other examples of the genre which must mean it was rather original and innovative in its day! The graphics are understandably simple and very repetitive and the sound is equally basic but it's actually a lot of fun to play. Control of the main character (who looks more like a fat bird than a tanuki, and hobbles around like one too!) is decent and his game is a very addictive one. There is a fairly generous time limit and it's not an especially tough game with practise paying off very quickly. It's true that it's rather repetitive and maybe a little rough around the edges but the basics have been executed well and, considering its age, Ponpoko is still a lot of fun.