Back in 1992, Sega were at the very height of their powers. Business was booming for their arcade division and they had turned around their initially faltering fortunes as a console manufacturer as well, releasing the mighty MegaDrive at the end of the 80’s which went on to dominate in most of the world’s territories. This period also unsurprisingly coincided with the height of my Sega fanboyishness too. Never was I more convinced of their superiority and it seems they bought into it somewhat themselves as well. 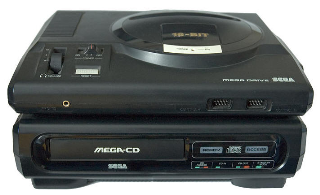 What should a company do when things are going so well? Expand, innovate, anything but stand idly by raking in the cash, however much of it there may be. It certainly wasn't their idea - many computer manufacturers were seeking to expand into the burgeoning world of CD-ROM based upgrades. One console had already been furnished with a flashy device of this nature - NEC's magnificent PC Engine, which had been making pretty good use of the format for some time already. Spurred on by this success, as well as the desire to prolong the life of their 16-bit wonder, it wasn't long before Sega announced their own CD-ROM upgrade, known as the Mega-CD (except to those perpetual name-changers in the US where it was simply called the Sega-CD) and there were high hopes for it.

It was certainly a nice-looking unit when it did appear, first of all in Japan of course, in 1991. As was usually the case until recent years, the new hardware took a long time to see a release in the other territories – ten months for the US, a further six months for Europe, but for most gamers it was worth the wait, or so Sega's adverts and the non-stop hype machine in the magazines would have us believe. 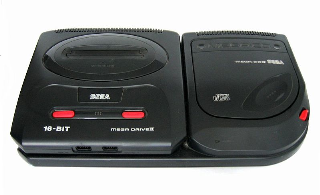 It was powered by an accelerated version of the MegaDrive's CPU - the trusty 68000 - and it had all sorts of other impressive-sounding stuff. We were tempted by promises of full-motion video, orchestral-quality sound, SNES-style scaling and rotation tricks, and huge games that filled up the enormous CD's with wonders beyond our reckoning. What we eventually received, however, was typical of games released on most early CD-ROM systems and usually fell into two categories - games that tried to make full use of the flashy new abilities and ended up being unplayable monstrosities, or slightly upgraded ports of 'normal' titles already available elsewhere, or often on the MD itself. It did receive an initially enthusiastic reception from the gaming press but the novelty soon wore off and most gamers were able to see through Sega's flashy tricks.

Many games did feature lovely audio as promised but the much-trumpeted FMV was poor quality and grainy thanks to the MD's rather limited colour palette and was usually featured in very small windows as well. Suffice to say, like most similar upgrades and even dedicated systems, it didn't last too long. Sega did their best to keep it going by releasing some exclusive titles - some were even good such as Sonic CD and the Lunar series of RPG's - and they also released a redesigned version of the system (Mega CD II, believe it or not), but it wasn't enough and it quickly lost support from most publishers of the day which signals the beginning of the end for any system...

Special Note: Like many of my other foolish ramblings, this post has ended up being rather on the long side so I've decided to split it in two - check tomorrow for the conclusion! :|
Posted by RetroKingSimon at 16:42