Well, Sega tried what I can only assume was their best but the Mega-CD didn't really set the gaming world on fire, despite hype to the contrary. Mine was bought before all this though, of course. Back in those days, a good friend of mine and his brother used to buy all the latest consoles and computers as soon as they were released before (usually) quickly tiring of them and selling them on. It was via this source that I acquired several of my consoles including my MegaDrive itself and later my 3DO.

The lure of the Mega CD was of course too much for them and they duly bought one at the first opportunity. As usual, it didn't last long in their hands so I, helpfully, once again relieved them of the burden of trying to sell it! Shortly after haphazardly transporting it home on my wonky moped, I eagerly set it up next to my splendid and worn-out MegaDrive. It did come with a handful of (multi-named) games as well and they were thus: 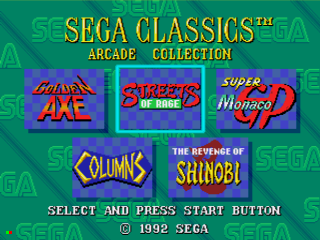 Silly old Sega - they really didn't do themselves any favours by making this the pack-in disc for their new system, did they? As you may suspect from the 'collection' and 'classics' parts of its title, it's a disc containing a collection of some of their past classics - namely, Golden Axe, Revenge of Shinobi, Super Monaco GP, Columns, and Streets of Rage. As you may not suspect from the 'arcade' part of the title, however, all games are the normal MegaDrive versions bereft of any modifications or improvements! Good games they may well be (except for SMGP which I never really got into) but they were also pretty old by this point as well as being among the MD's most popular titles which of course meant a majority of new MCD owners had already played them, or in my case still owned them! Oh well, it got a bit more mileage out of some games that were indeed classics, and you never know - they might've been new to some gamers! 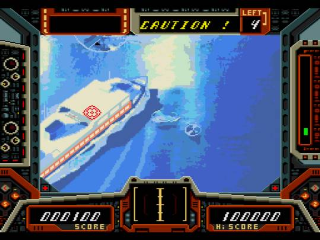 This was the first MCD game I ever played as an owner of the console. I didn't know at the time but it's actually based on a Data East laserdisc game released all the way back in 1984 and, like many other gamers, I was initially wowed by the fancy graphics it makes use of thanks to this heritage. Sadly though, that's about the only wow-worthy aspect of the game as its chopper-based shooting action comes in the form of an 'on rails' journey around the game's various locales during which time you merely control an on-screen cross-hair. I suppose it was a decent early attempt to show off the MCD's abilities but it was was also a game that almost everyone soon grew bored of. Flashiness almost never makes up for a lack of creative game design but many more developers would try their luck anyway. 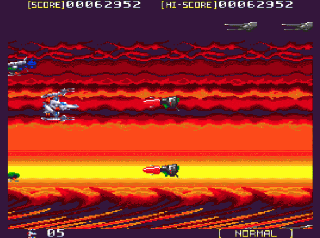 Unlike a lot of MCD games which were ported from cartridge to CD-ROM, Sol-Feace actually did the opposite. Originally released as an X68000 game, its next release was this one before it was converted to the standard MD, losing very little in the process. There are some nice anime-style intro/cut-scene sequences though, which look pretty, and the soundtrack is predictably loud and suits the game well. It was a reasonable enough horizontal-scroller if you were happy to play a type of game that you'd probably been playing extensively for the last few years already, I guess, but even the normal MD version didn't exactly set pulses racing so, for one of the first MCD releases to basically be an above-average-but-unspectacular shmup should tell you that it's hardly an essential acquisition either. 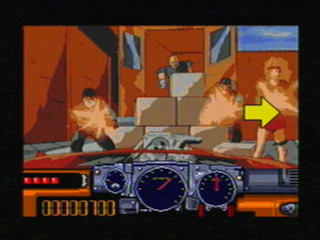 As the 'FX' in the title probably tells you, this was another early release from Wolf Team who had already blessed MCD gamers with Thunder Storm FX. It was another one based on an early Data East laserdisc arcade title too, this time an 'interactive movie' featuring good quality cartoony visuals but little else of note. The story sees you take on the role of a vigilante, complete with cool car of course (otherwise it would have to be called Footpath Blaster FX), with the aim of taking down an evil biker gang. It all sounds quite promising but unfortunately it literally is an interactive movie (barely that, in fact) - your actions are even more limited than in TSFX and consist of little more than pressing a button or direction when the relevant on-screen prompt appears. You'll probably play it though once or twice but it was quickly forgotten. 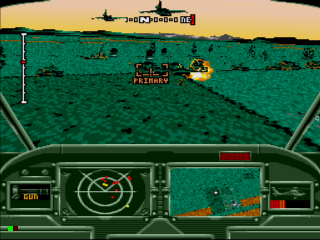 Core Design's Thunderhawk was previously available on the 16-bit home computers but it was actually a rare example of a game that was given a pretty thorough makeover before its MCD release a couple of years later, and the result was one of the first must-have's on the new system. There was a rocking soundtrack as you would expect, decent rendered intros, cut-scenes, mission briefings, and all that sort of thing, and as a 3D helicopter combat simulator it made fantastic use of the MCD's scaling and rotation abilities as well. The fact that the chopper in question (and of the title) is an Apache gunship certainly ups the coolness levels as well and inevitably means that blowing stuff up forms the basis of the ten missions available here. Exciting and addictive blasting action with a hint of strategy (sort of like a 3D Desert Strike, actually) and a rare example of a top-quality next-gen-style game on the humble MegaDrive (kinda).


So, the Mega-CD may have been blessed with some fancy bits and pieces but, to start with at least, it was all a bit of an anti-climax. I played a lot of Thunderhawk but the other titles here were barely touched again after the first week or so. Some good releases would come for MCD owners to enjoy including some superb exclusive titles, but for me they came too late as I had already sold on my MCD and gone back to my trusty MegaDrive. My faith in Sega had been shaken for the first time and I thought a lot more carefully about buying their future products from then on. The beginning of the end?

See part one of this post here :)
Posted by RetroKingSimon at 20:48