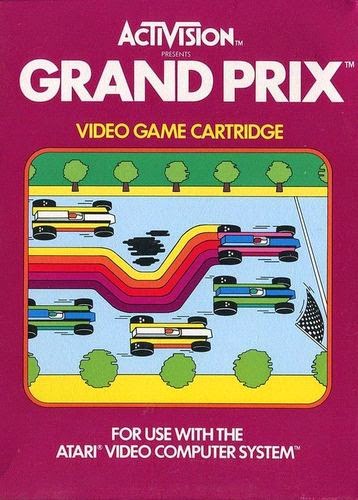 I can't think of too many systems whose games require as much of a combination of creativity from the programmer and imagination from the player as the VCS, and that's especially true when it comes to racing games. This effort from Activision is not just a generic car game either. It actually seeks to emulate the intense racing of Formula 1 - a challenge indeed! It consists of four games variations in total which are actually different courses representing Watkins Glen, Brands Hatch, Le Mans, and Monaco. Despite such varied locations, however, the courses look very similar. Each is viewed directly from above and scrolls from right to left in a straight line until you reach the finish line. There are no corners or race positions or anything like that, just road and lots of other cars to weave around, with the object simply being to reach the end in the fastest time possible. Hitting other cars obviously slows you down though, and there are also patches of oil here and there that make your car skid, so it's up to you how fast you want to risk driving. 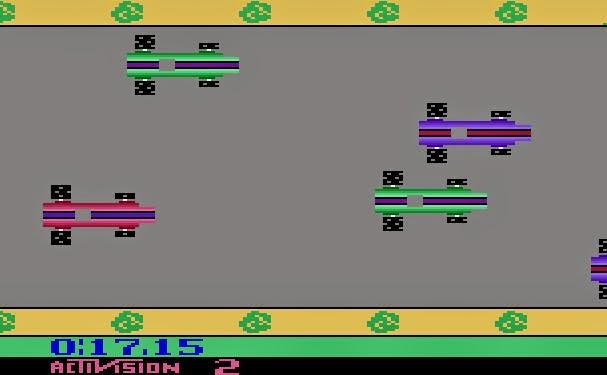 The only differences between the four courses are their increasing lengths and the number of bridges they feature which are just short, narrower sections of road. Aside from that, each is the same, even their colour schemes which is often the difference between 'levels' with VCS games. The cars do look quite decent though, especially their tyres which 'spin' at varying speeds, and the engine sounds are great. The scrolling can get rather fast too, if you manage to get up to full speed! The gameplay is a bit limited since it's restricted to moving your car up and down to avoid the slower cars that endlessly get in the way but it's also good fun and trying to achieve your best time is addictive in the short-term. Appeal is likely to wane longer term but Grand Prix is very enjoyable while it lasts.