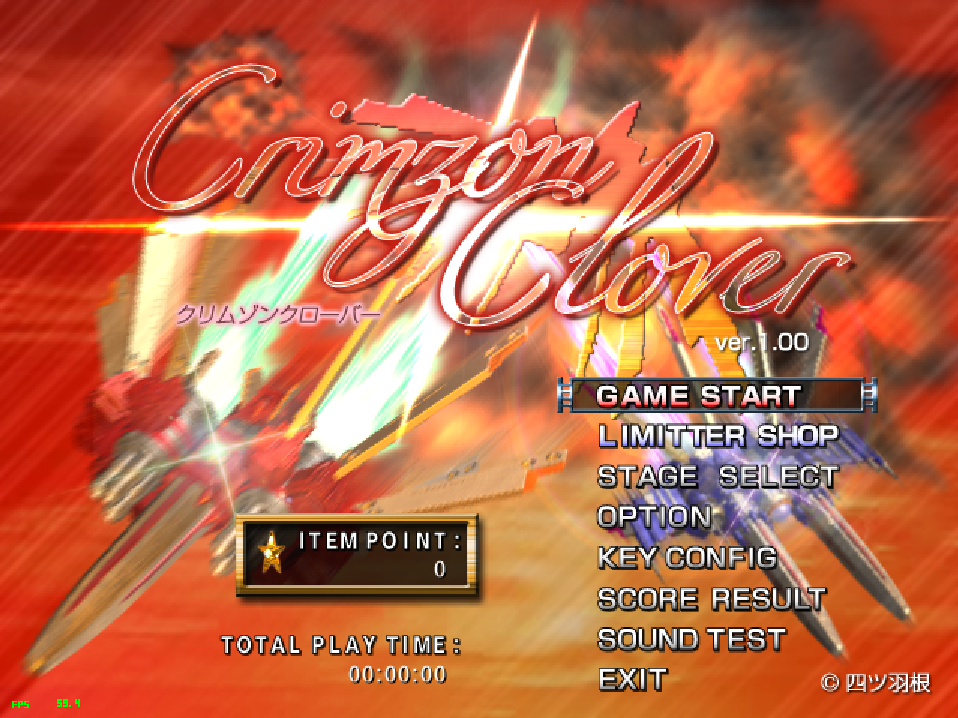 I have been meaning to take a look at this interestingly-named doujin shooter for literally years now but kept putting it off for one reason or another. It's recent re-release on Steam (complete with new lick of paint), however, has given me the prod I apparently needed to finally get around to giving it a try! It was originally released back in 2011 by a talented fellow called Yotsubane who first unveiled the finished version at the Comiket 79 (doujin fair) and, like many such games, it takes the form of a bullet-hell vertical-scroller. There are quite a few play modes and options available for a game of its type though, including comprehensive menus which allow you to change lots of things, and three types of game - Simple, Original, and Unlimited - which are basically three difficulty levels.

You'll first have to prove your skill in either of the easier two modes to unlock the Unlimited mode, and the number of selectable ships is initially limited to just one, known as 'Type I', as well. Another called 'Type II' and a secret third choice called 'Type Z' can be unlocked too, but all three are quite similar. They all have a rapid-fire cannon, a couple of escort drones which provide their own fire, and each also has a handy lock-on system. Pressing the appropriate button to activate this allows you to lock on to enemies within its targeting radius and releasing the button fires off a homing laser to take each target out. Destroyed enemies release showers of stars which can be grabbed and, as well as powering-up your ship in stages, they can also be spent in the shop on the title screen which sells continues amongst other things.

The enemies are grand in number and come in the usual shapes and sizes - squadrons of smaller, fast craft pour onto the screen, tanks are regularly found at ground level (which can be destroyed with your standard cannon - no bombs are necessary), and there are also lots of medium-sized and large craft that spew much larger bullets, and a startling number of them too. Destroying enemies also gradually fills the 'Break Gauge', located in the top-right corner of the screen. In 'Simple' mode, this allows you to drop powerful incendiary devices which act somewhat like carpet bombs but in the 'Original' and 'Unlimited' modes it has an even more awesome use. When the gauge is between 50% and 99% you can still drop bombs but if you allow it to reach 100% you can unleash 'Break Mode' which looks superbly flashy.

During Break Mode your weapons are significantly powered-up and if you manage to fill the Break Gauge again whilst already in Break Mode, you'll then enter 'Double Break Mode' in which you'll be even more powerful! The rate at which the gauge is filled depends on several things (the three ships differ in refill rates as well as engine speed and drone placement), but the main way to fill if quickly is to keep the 'Break Rate' up which increases as you destroy more enemies in quick succession. Trying to learn all these buttons and modes might be a trifle confusing to start with if I'm honest, at least if you haven't played too many shmups of this type before like me, and then you need to try to actually see what's going on when you're playing, but it doesn't actually take too long to get used to the game's intricacies.

Crimzon Clover is definitely one of the more professional doujin games I've played so far too. Regardless of which game mode or craft you select there are five stages in all, each ending with the usual giant boss, which might not sound a lot but there's a good forty minutes of intense blasting to be had here, and there's never a dull moment either. The presentation (menus, in-game side panels, etc) could use a little polish (something they duly received with the updated 'World Ignition' edition for Steam) but other than that the graphics are fantastic. The backgrounds consist of various cities, cloud decks, open water, and apparently-alien landscapes, and they're viewed from a slightly unusual isometric perspective, but it doesn't really matter too much what they are as you'll rarely get much of a chance to see them!

This is, perhaps unsurprisingly, due to a somewhat excessive amount of stuff going on that obscures your view. Dozens of sprites of all sizes, zipping around or hovering ominously, exploding left and right, showers of gold stars, hundreds of bullets and lasers of all sizes and colours... there's certainly a lot going on and, while you won't get to ogle much of it for long, most of the designs and effects are really good, especially the bosses and larger ships, as well as the many, many explosions and cool weapon effects. The music is top-notch as well - all high tempo electronic tunes of course, but they're good and suit the frenetic nature of the game well. It looks absolutely insane if you're watching someone else play and it's almost constantly on the verge of overwhelming you when you're playing yourself as well.

Well, in the 'Original' and especially 'Unlimited' modes at least. 'Simple' mode is a bit more manageable for wussies like me and is, I fear, the only mode I'm likely to make much progress on. A majority of the 'research' for this review has been in 'Original' mode though, and I found it so tough. The first stage isn't too bad but the bullet count from the second stage onwards is immense. Bullets are cancelled once a given enemy is destroyed (though only if you use the homing shot as far as I can tell), and your ship's hitbox is quite small, but the mid and end bosses are still a massive challenge, filling the entire screen with pretty-but-deadly bullets of many shapes and colours, and it takes an age to wear down their sizeable energy meters, although you can at least continue to charge your Break Meter in these confrontations.

Most of my lives were lost fighting the bosses though, and you don't even get any continues. You can buy some in the shop before play but even this isn't made easy for you as they increase in cost each time and you can only use them once! So, I think it's safe to say this is one for the hardcore shmup fans then, who will no doubt love the crazy non-stop blasting action complete with intricate scoring system and multipliers galore (if they haven't played it to death already of course). The rest of us mere mortals will struggle for sure, but even so, it's impossible not to be impressed by this dazzling shmup spectacle or have anything but admiration and respect for its creator who (almost) single-handedly poured five years of dedication and passion into his project. It's definitely not for everyone but if you like bullet hell games, or indeed doujin works, there are few better examples of either.