Well, okay, not lost but sorely neglected at least! To my ever deepening shame and sorrow it's now been a good couple of year since I fired up my precious Dreamcast, the official 'Last Great Console Ever'. This has mainly been because of this very blog on which pretty much all of my gaming time has been spent 'researching' games for features. A worthy sacrifice? Perhaps, but things still had to change.

So, when my wife and I decided to replace our beloved but ageing car the weekend before last, in order to acquaint ourselves with the new one we drove to my parents house (around 12 miles) where, as well as catching up with my splendid ancestors, I decided to also grab my collection of Dreamcast games which were being stored in my old room. However, when I returned home and tried reuniting them with the console which was stowed in the 'stuff cupboard', to my not-inconsiderable fury I was unable to find the controller! Cue near enough an entire week of searching for it until... Thursday night when I finally found it stashed inside my Xbox box. Grrr! My incredulity at this revelation was, however, mixed with excitement as I could now finally reacquaint myself with my recently recovered collection.

Most of these games were bought at full price during my most irresponsible of credit card days and include 38 boxed, near-mint UK titles as well as another 14 boxless discs/intructions, and even one US import I bought many moons ago but never got around to playing. I know, I know, but I hope to change that soon! Quite a sizeable part of my collection consists of racing games (probably my favourite genre on the DC) but there's also a few 2D fighting games, and even some of those new fangled 3D adventures (including Shenmue), and there's nary a sports game in sight (okay, Tee Off is a golf game but it's a one-off, and it's great too, so it doesn't count!). 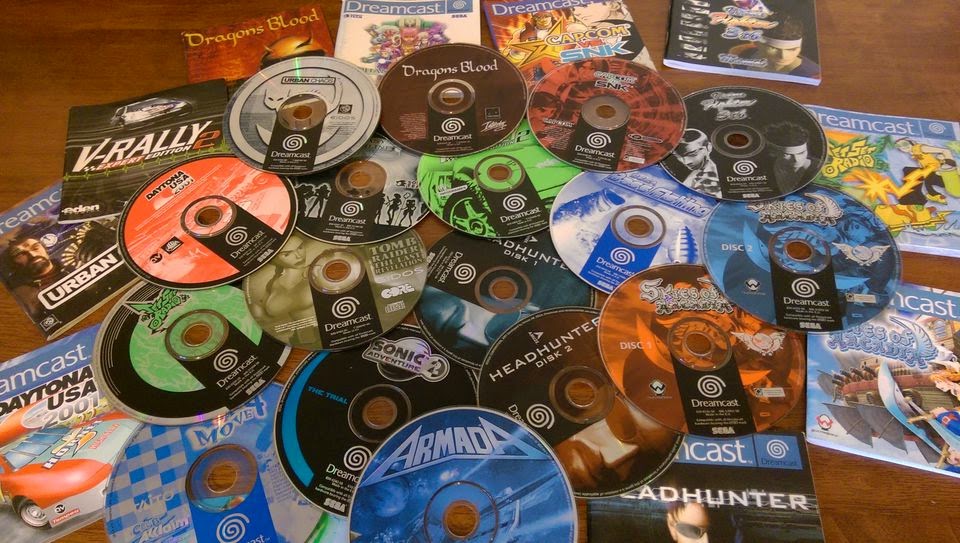 But where to start? Actually, that is a bit of a silly question as I went straight for what was arguably my favourite DC game - Speed Devils. Powering up Sega's 128-bit beast once again was a slightly surreal experience though. Not as far as its fine games are concerned, you understand - I've still been playing those here and there via emulation (which is necessary for grabbing screenshots and all that stuff) but the system itself is a lot noisier than I remember (my good friend Luke used to complain about that but I dismissed it as exaggeration) and the loading times seem rather long now as well. Even my hands were no longer used to the controller. Had it really been so long since I used this splendid console?

Oh well, I suppose I can just use this as an excuse to start some of my fave games from the beginning again. On the racing front there's the aforementioned Speed Devils as well as another I spent a huge amount of time with, Sega GT. Capcom's fighting games are always great fun (not to mention challenging for an unskilled oaf like me), especially Third Strike. Then again, thinking about it, I could make use of my DC steering wheel and arcade stick respectively for these two genres, but that means finding them first and guess where they are... That's right, buried behind a tonne of junk in my old room at my parent's house!

I guess I should also use this opportunity to finally play some of the titles I never got around to such as Shadow Man, Soul Reaver, Skies of Arcadia, and all the rest of those lengthy action adventures. I could even buy a few more titles I always wanted like Silver, Fur Fighters, Slave Zero, Rez, Fighting Vipers 2 and various others. Anyone else have any fine suggestions for games I might've overlooked or unfairly dismissed? It's good to get back to Sega's finest anyway. Ah, Dreamcast, however long it's been, it was too long...