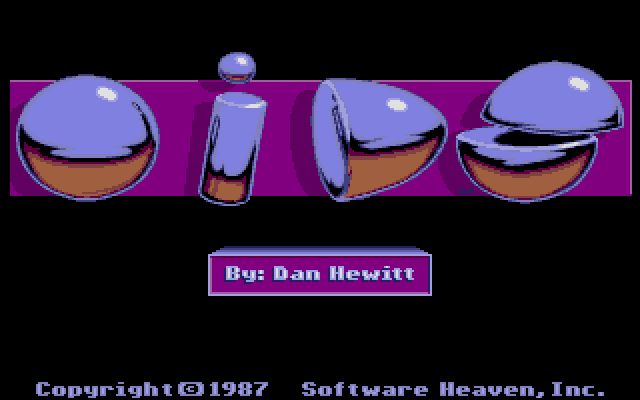 Quite a few of these gravity games not only require you to combat the natural attractive force of a given celestial body but also land your craft on their surface. This is often in order to save stranded workers or rescue hostages, but Oids must be the only one that asks you to actually kidnap them. Your targets are 'Oids' - android slaves created by the evil Biocretes, forced into servitude, and discarded when no longer needed. You, as a 'member of a compassionate race', were so 'moved and angered' by the mistreatment of these poor sentient clankers that you joined the intergalactic organisation known as SaveOids and vowed to devote your life to freeing the Oids from the yoke of Biocrete slavery. Apparently.

To do this you will need a ship and luckily you have one. It's called the 'V-Wing' and is similar to such vessels in other games. It's roughly triangular, has a thruster on the back, a 'nuclear pellet' pea-shooter gun on the front, and is equipped with a shield, and to succeed in your mission of mercy you'll need to guide it through many stages filled with Biocrete defences. There are eight 'galaxies' in total, known as Novoids, Intermedia, Cosmoids, Newbekuloid, Gravdromeda, Trianguloid, Mooseoids, and Hoppoids, and any of them can be selected from the start of the game. Each is home to several 'planetoids' (i.e. stages) - anywhere from two to eight depending on the galaxy - which consist of looping rocky landscapes festooned with Biocrete buildings and installations.

There are many kinds including lots of unspecified domed buildings that can generally be ignored (unless you want lots of points), but the others are more important. On the explodey side there are gun turrets and missile silos, any of which can send your V-Wing falling to the rocks in flames with a single shot, while others include fuel tanks (to replenish your plentiful-but-not-infinite supplies), teleporters (send you to an equivalent elsewhere), repulsors (which push you away when you get close), and of course the factories where the Oids are toiling away. Any building can be destroyed with a single shot from your gun and your ship can even fire 'NovaBombs' with even more destructive powers, but firing off too many rounds when a factory is nearby can be dangerous as it's easy to shoot the Oids as they flee the burning wreckage.

Once the Oids are free they'll run away so you need to land quickly (but carefully!). Once you're on the ground they'll change direction and run towards your ship instead. Once you've collected enough of them, it's time to leave by way of the mothership which dropped you off to start with. Although you can tackle the various galaxies in any order you want, they obviously get tougher and tougher, partly as a result of more numerous and more aggressive defences (which include homing missiles and enemy spacecraft as well), but also because of more intricate stage designs including narrow passageways and caverns, often complemented by pesky repulsors that try to send you onto the deadly brown rocks. Your shields will help but they don't last forever.

In fact, the only way to replenish the shields is at the expense of your fuel, but I guess that's not a terribly harsh pay-off, and indeed, Oids is definitely not an overly-tough or unfair game. The pull of the gravity isn't as strong as many other games of this type and easy use of the shield pretty much means every life lost is completely the player's own fault. This came as a very pleasant surprise, I must say, as similar games often are very tough or quite unfair (or both). Here, each session can go on for quite a while, and even if you manage to get through the total of thirty-six stages, there's also a spiffing level editor that allows you to create your own stages. If you're anything like me, though, you'll just end up making the most stupidly complex examples possible!

There is certainly a lot to do here then, and it's all mighty enjoyable to do too. Control of the V-Wing and the related physics are as precise as one might hope and the difficulty curve is nicely balanced. The game's only negatives really are its aesthetics. There isn't any music, you see, the sound effects are minimal, and the graphics are very simplistic and quite repetitive. That said, I do like the style and it works well - there's no chance of losing track of what you're doing, that's for sure! I think my favourite thing about Oids, though, is the superb pacing. There's no timer and no strict limits of any kind meaning you can play through it at your own speed, and it's really enjoyable to do so. To be honest, I wasn't expecting it to be much (if any) better than similar games such as Thrust, but it's actually the finest example I've yet played.